Press Release by: SKUSA PRO TOUR
Inaugural Modesto Grand Prix ready to welcome record crowd of racers and spectators for August 1-3 extravaganza.
TEMECULA, CA (July 11, 2014) – There is no question that the anticipation climbs with each passing day for all the Superkarts! USA racers around the country, as the 2014 Pro Tour SummerNationals draws ever closer. The inaugural Save Mart Supermarkets Modesto Grand Prix will play host to this year’s event on August 1-3, making it the first temporary circuit race outside of the annual SuperNationals to play a role in a Pro Tour championship chase. The City of Modesto and Superkarts! USA have been working feverishly over the last few months, making sure that this event feels like no other in the sport of karting, including a vast marketing and publicity effort and a complete repaving of the downtown area street course.

“Of course, I may seem biased, but I honestly think this is the most highly promoted kart race ever,” explained Superkarts! USA CEO Tom Kutscher. “Publicity efforts include a large push into traditional mediums, including major shopping malls, local FM radio stations, community businesses, and numerous print and online publications. It truly is an event on par with any professional car race in terms of how it is being promoted.”

The event expects to attract thousands of spectators who are completely new to the sport of karting. The city of Modesto has tapped traditional population centers with local foot traffic to raise awareness for the event and sport as a whole.

Scott Humphries, from the City of Modesto Parks and Recreation Department, has been involved in the event from the start. “The City of Modesto is completely behind this event. We have brought in a number of businesses and other numerous supporters to help fund the marketing, the track construction and all of the amenities that the spectators will enjoy while watching some of the best kart racers from around the world and North America battle on the city streets. We are looking to have a similar feel to that of the SuperNationals, with the hotel and pit area right next to the circuit.”

“One of the biggest complaints I get about karting is the lack of traditional non-participant awareness,” Kutscher said.  “Walking through a regular shopping mall and seeing someone like Gary Carlton (featured on the Modesto Grand Prix poster) hanging from the ceiling – it’s a big achievement for our sport.”

Promotion aside, the city has also gone to great lengths to ensure the best possible experience for competitors. 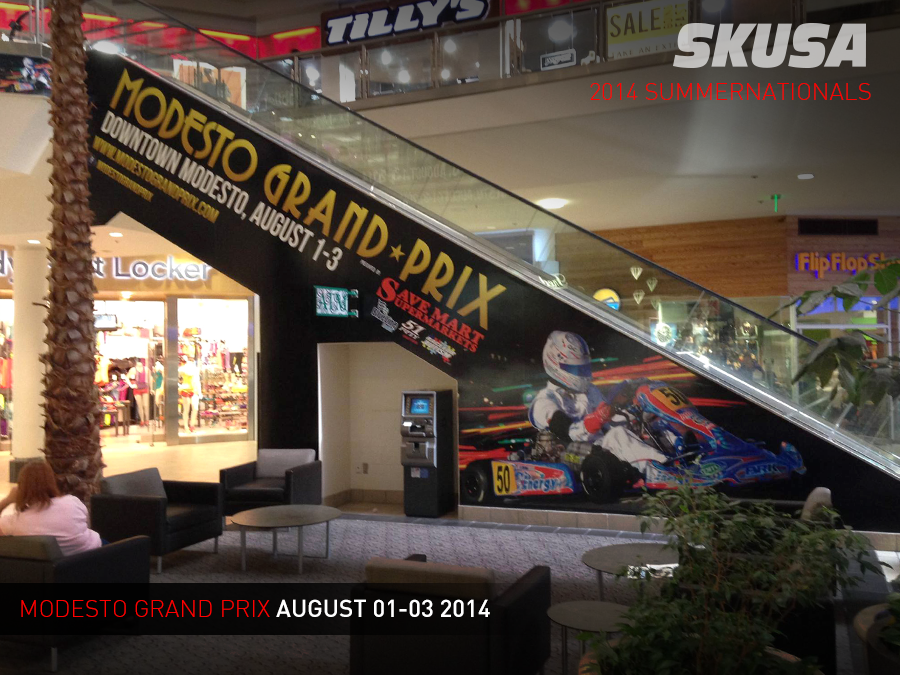 Downtown streets have been freshly repaved just over two months ago, making for the smoothest possible racing surface available. A video of track layout testing done back in January can be found at the eKartingNews.com Youtube page.

The racing action will also be augmented by several other fan experiences, including live music, culinary experiences, nightlife and local restaurant promotions. A kid’s zone, a large car show, numerous local vendors, V.I.P. tents and plenty of food booths to satisfy your taste buds will be additional highlights of the weekend. A full list of activities and where they are located on a complete map of the downtown area is posted at the ModestoGP.com website.

“The city is extremely proactive with every facet of the event,” added Kutscher. “They have been very thorough and forward thinking and have called upon everyone within the city ranks to make this an amazing experience. As strange as it is to say, I think this race will evolve into something that competes alongside the SuperNationals in terms of prestige.”

Superkarts! USA and the City of Modesto will be offering a display area in the vendor area to local kart clubs and kart shops to promote their products, programs and help educate the public about karting. The concept is to leverage the event in an effort to promote NorCal karting to the masses, and SKUSA is dedicated to opening the door for local clubs and shops to benefit from the Grand Prix with this no-charge offer. So far, there will be six 10x20 display areas featuring the Blue Max Karting Club, Cambrian Go-Karts, Simraceway Performance Karting Center, Atwater Kart Club, Leading Edge Motorsports, and Aluminos. Interested parties should send an email to info@superkartsusa.com right away, as these free booths are going fast.

“This should be a great opportunity to bring some new people into the sport, and to grow the awareness of karting in the NorCal region,” Kutscher offered. “We just want to get people racing and we’re happy to be able to work with the clubs and shops in the region.  It’s a win-win.”

The Centre Plaza between the paddock and the DoubleTree hotel will be providing a bar area set-up with the live feed of all the racing, along with a radio station set up outside, broadcasting live from the event and scheduled to bring in drivers for interviews throughout the weekend. The event will feature three large LED TVs with live broadcast of the event located throughout the spectator area of the course. Nearly 200 large concert-style speakers will be placed all along the circuit and there will be over 85 light towers to surround the course during the night sessions. Two pedestrian bridges are being brought in to allow the fans more access around the course. Humphries is confident that racers will enjoy this event like no other. “Everything will be right at your fingertips and the red carpet will be rolled out for the karting world in Modesto!”

Racer numbers are reaching record highs, with over 200 entries already secured for the SummerNationals. The S2 Semi-Pro Stock Moto division was the first class to fill up to the maximum 40 drivers, with a wait list created as the entry deadline draws closer. The categories that are expected to reach their class caps are S4 Master Stock Moto and TaG Cadet (which are both at 36 entries, currently). Numbers continue to increase in the remaining classes, with the championship contenders looking to continue what they started at the SpringNationals at the Dallas Karting Complex in Caddo Mills, Texas.

The deadline to enter is set for midnight (PDT) on Sunday, July 27 at skusastore.com. Anyone who does not enter for the event prior to the deadline will have to register at the track, beginning on Thursday, July 31, with the entry fee increased to $500 for any remaining spots. Pit spot requests are flying in to SKUSA headquarters, and all eight SummerNationals class sponsors have been confirmed. Superkarts! USA is asking people to secure their pit spot as soon as they are registered and preferably by July 18 at the latest by following the directions on the Pit Spot Reservation section of the website. Superkarts! USA is also asking teams to please inform them know immediately if you are interested in the Live Feed program offered by Streamline Audio Visual in your pit area. Additional details regarding this event can be found at the SKUSA event page.

For more information on anything related to Superkarts! USA, please visit their website – www.superkartsusa.com – or call the SKUSA head office at 951-491-0808.