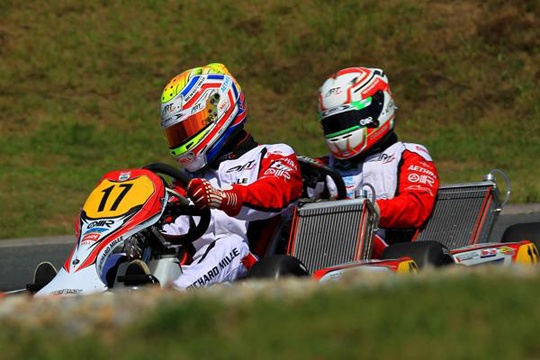 Press Release by: Art Grand Prix
A weekend that started well off the pace for the boys managed by Armando Filini turned into a superb display of skill and speed by the ART Grand Prix star Ben Hanley in occasion of the second round of the European KZ Championship.
With the characteristic German weather putting to the test both the expertise and coolness of drivers and mechanics, the KZ weekend saw Brit Ben Hanley and Italian Mirko Torsellini struggling to find ideal set-up in time for qualifying.
As only four drivers managed to lap below the 50” mark, Torsellini and Hanley had to do away with the 15th and 17th fastest lap respectively, certainly not what everyone was hoping for at the ART Grand Prix camp.

Despite the changing weather conditions, and the difficulty to find speed with the new Bridgestones at lower temperatures, the heat session provided a glimpse of hope when Hanley made up as many as five positions in the first heat and stopped the fastest lap of the race (50”225). Following that, Hanley went on with another promising comeback in the second heat by finishing 13th after lapping below the 49”9 mark as only few other drivers in the field, only to be inflicted a 10” penalty for a contact early in the race dropping him down to 24th. With Hanley and Torsellini on similar pace but only able to grab P14 and P17 on prefinal starting grid, the German crowd was in for some exciting action.

As the weather conditions became more consistent for the final day of racing, the Brit put up an impressive performance in the prefinal, one that would allow him to move past as many as 7 rivals in the first lap alone! By lap 5 Hanley was already shadowing the 5th-placed driver, hassling him for the remaining part of the race and closing at a mere 5 tenth with the third fastest lap of the race to his credit (49”7). Torsellini from his part ended a position better than how he started after having dropped outside the top-20 due to first lap mayhem.

The final would provide even more excitement, with Hanley in great shape off the green lights contending P3 for a couple of laps, until a contact with Ardigò forced him to drop down to 9th and to do it all over again. The Brits didn’t get phased out though, and after a couple of laps to resume his rhythm, he launched back in attack mode taking his adversaries one after the other. As the consistency of his laptimes reached the 49”7 mark, Hanley made the decisive move for 6th with 10 laps to go, crowning a stellar performance worth valuable championship points, while his Italian teammate closed a hard-fought race with a well-deserved 10th place.

With 35 points still to be awarded in the final meeting scheduled at the end of the month on the Swedish track in Kristianstad, Hanley still has plenty of chances to hit the continental crown from his current 7th place in the standings.


Quite an uphill weekend in KZ2 for Sam Webster, as the Brit struggled for pace already from official qualifying. The lack of testing and little knowledge of the track did prove fatal for the talented ART Grand Prix driver, who failed to go through to final phase. Forced to start the five heats from 17th on grid, Webster did managed to grab a couple of good results – 9th in Heat 3 and 11th on Heat 4 – proving to have what it takes to be a future protagonist of the class. A few too many contacts forced him to go through to what would turn out to be an unsuccessful Second Chance Heat.


Armando Filini (Team Manager)
“Once again we proved our worth in one of the toughest championships of the season. Hanley’s pace in the last part of the weekend was good enough to fight for the podium, but a contact spoiled his weekend. And what’s even more comforting is Torsellini’s ability to match that pace, meaning our equipment is world-class.
In Kristianstad we will give everything we’ve got as the podium, if not the title, is still amply within reach.”