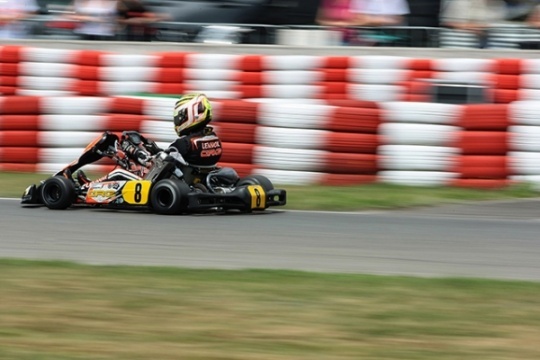 Press Release by: CRG Racing Team
Lennox has been protagonist of a good duel for the podium in the second round of the European Championship in Germany.
Tiene has been hit from behind in the Final at turn one when in P3. Bitter end for Hiltbrand and Federer in KZ2. Dalè had to concede his classification lead.

Wackersdorf has not been so kind with CRG works team this year, despite the technical compartment of the Italian firm being particularly competitive and its drivers among the absolute quickest in the second round of the European KZ and KZ2 Championships. The best result of the weekend came thanks to Jordon Lennox-Lamb, who was fifth on CRG-Maxter at the end of a spectacular and exciting duel for the podium.

The prize for bad luck went to Felice Tiene, on CRG-Maxter, who has harvested a very good third place in Prefinal after recovering three places in qualifying heats. Unfortunately, the Italian has been hit from behind at turn one of the Final. As happened a week before to Forè in the German Championship, Tiene had the same bad experience at the first hairpin which vanished his chances of a good result and probably – judging by the competitiveness shown throughout the weekend – of a victory. What a real shame!

Jordon Lennox-Lamb put in a good race instead, and managed to get a lot of positions back since qualifying, heats and Prefinal, where he ended seventh. The British driver produced a highly spectacular and correct duel in the leading group, holding the second position and the third. He ended his effort in fifth position, right in the slipstream of the leading drivers Thonon, Dreezen, Lammers and Camponeschi.

In consequence to former classification leader Ardigò's retirement, Rick Dreezer on Zanardi, inherited the lead with 58 points, Ardigò follows him in second at 43 lengths and Thonon is third at 36. Lennox is fourth at 34 points, Pex fifth at 33. The third and final round of the Championship – race be held in Sweden –  will name the winner of the European KZ Championship at the end of the month.

The best result for CRG in KZ2 came from the privateer German driver Maik Siebecke, who was third after the penalty handed to the Czech Midrla. All turned badly for the privateeer on CRG-Maxter Andrea Dalè instead, who,  after his dominion in Genk, had some difficulties in Wackersdorf. Dalè has been handed a double 10 seconds penalty due to incidents that pushed him out of the points. In the Prefinal he slipped down from P10 to P25, while in the Final from the 14th to the 20th place.

Pedro Hiltbrand and Fabian Federer, both CRG-Maxter, went out due to incidents after a series of good races. Hiltbrand had a stunning comeback in the heats but had a contact in the Prefinal and then also in the Final. Federer had a similar fate after winning easily the repechage race. The Final was won by the Lithuanian driver Juodvirsis, who brought the consolation of the victory of a Maxter engine to Tinini Group.

2012 European Champion Juodvirsis earned the lead of the charts in KZ2 as he totalled 42 points so far. Dalè is currently second at 35. The race of Kristianstad scheduled for next 27 July will decide the title winner.