Author: Vroomkart International
We could not miss the chance to feature what can be considered the greatest karting event in over 50 years of karting in North America, the SKUSA SuperNational XIII, in December issue cover. An event that will go down in history as the one featuring seven-time F1 World Champion Schumacher on starting grid, as well as the best drivers international karting has to offer. Venue: the most glamorous, swanky city of the USA: Las Vegas!
Not to be missed, a special article from the unique Mizunami Festival organized by Eiko.

The past year has been a transition year. Everybody has been waiting for this economical crisis, so much publicised and in some ways object of evident instrumentation for hiding other things that underlined limits of a political set up, for facing with awareness of cause social-entrepreneurial difficulties. The Made-in-Italy is a delicious dish that everybody likes, an obsession of our governing bodies that are continuously and anxiously trying to be present on the home front of the made in Italy in the world, hoping to get approval of the production lines of the country. Then there was the anticipation of the new engine homologation. After three years we expected a gust of innovation regarding KF classes; it was the engine that should have breathe new life into the market, but the negative results have surprised even those who least expected it. However, there doesn’t seem to be an alternative solution to this new sudden explosion of engines, you go on along in the same way, which has a consensus, close to zero. What can we say: If at first you don’t succeed … Yes! Maybe in a couple of years’ time…
So, always because history is indissoluble truth of human behaviour, don’t forget 1995 when Rotax decided to withdraw from Cik/Fia races. Mark my words, we’re talking about a colossal of the world motoring industry, one which was very successful and that has been taken as example by many  (everybody remembers the well-known “square stroke” engines). They had been far sighted into the future of karting. Just like the situation, which is so rooted in a niche of fans, could have become a boomerang. Rotax had caught glimpse of a limit where the karting industry, and the same caravan that promotes the sport on an international level wouldn’t have been able to gather the necessary resources. The cake wouldn’t have been able to satisfy the industrial structure with a production that later ended up inflating the market. So Rotax decided to turn over a new leaf and invest in a kart of the future. The TaG. Lightening in a clear sky. Rivals jumped with joy, obviously, and for at least one decade tucked entirely into that industrial void created by the Austro-Canadian colossal…  At each new homologation, there were new brands of engine and every so often some chassis manufacturing factories had their own engine. To this point, everything is normal, nothing strange. The only risk is that the offer may exceed demand. And if so the mechanism grips.
And this is when, once again, Rotax philosophy comes to our aid. To allow this not to happen you need more people to take up karting. This was the philosophy of the TaG. And Rotax organisation successfully underlines this formula, it irrupted into a world with something that has never been registered in the history of karting. In this case too, they have been the pioneers, an example to others. They invested in a credible project, a guarantee for everyone. Yes, a guarantee… For those of you who don’t know, besides selling a product that works, well-performing and reliable, Rotax is the only brand that has a 6 month guarantee for the purchaser.
This is a synonym of professionalism and respect for users.
However, this is a formula that up till now, hasn’t caught on in Italy. But only because once again the important made in Italy brands have decided not to give due recognition to a important brand.
A name a guarantee?
A Prodriver project has been launched in Italy that will take over from MTL. It has been coined and presented by the Csai for regulation the karting movement, which has been steadfast in the time of crises and has convinced even the most sceptical on the reason why karting cannot be subject to a totally dictatorial policy.
Yes, dear Vroom readers, this could well be the key word – and just having given a more “serious” name to the class that starts off is a good thing – for the future of national karting. Helping those who take up karting to have a good approach to the sport. The same thing that Rotax has been doing for nearly 15 years. Will our manufacturers be able to make good use of some of the technical-industrial evolution? Will they see that there is no future in “our garden” project? It is clear now that karting needs more space and ought to be presented, first and foremost, with professionalism towards those who practice it? Are we really sure once and for all that a breeding ground is very important indeed for the discipline of  the sport? Isn’t it true that karting without numbers just cannot survive? So, isn’t it time to apply specific policies to help support the requirements of karters more than a speculative policy? Approval among karting fans means obtain wealth for this field. ‘Prodriver’ should be a slogan to ride: always help and only help the final user, the kart driver.
Then the success of this policy is a logical consequence.
And to conclude, don’t forget (because history teaches) that the Domenichini-Buser synergy started thanks to a winning policy of the then Cik president on a national level, and that Buser (CIK manager) was promoted to an international level. And everything worked, take the Open Championship, an organised model that has acted as a school in the world and, likewise the 125 ICC (now KZ2)… that still works. The Italian scene was a very sound and many envied it.
This is to say that our management policy hasn’t always been so haphazard. And today, we seems to have an element that could lead to a better future, the basics required to take karting to the level it deserves and overcome the crises. What needs to be done is to take advantage of these elements, run things wisely, something that, unfortunately, isn’t as easy as it may seem, so, we’ll continue to keep our eyes open and look out…

May I take this opportunity to say a big thank you to all our collaborators who have helped us to edit Vroom every month and Best Wishes from the editorial staff for a Merry Christmas and a better 2010. 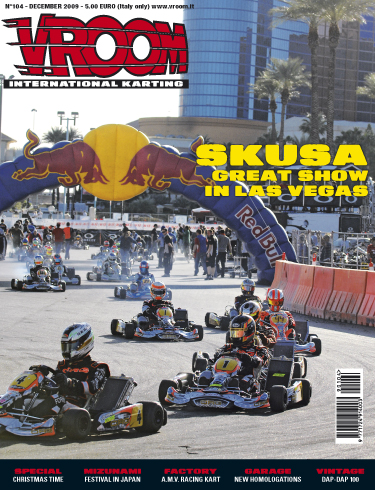 RACE REPORT – SKUSA SuperNationals XIII
This was it…the week that karting has waited for, the Superkarts! USA SuperNationals XIII. Following months of build-up and amazing announcements, the event gathered over 400 drivers at the Rio All-Suites Hotel and Casino in Las Vegas on the temporary circuit looking over the Strip. 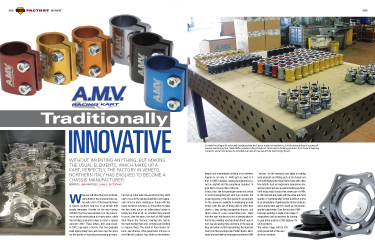 FACTORY – AMV
Without inventing anything, but making the usual elements, which make up a kart, perfectly, the factory in Veneto, northern Italy has evolved to become a chassis manufacturer. 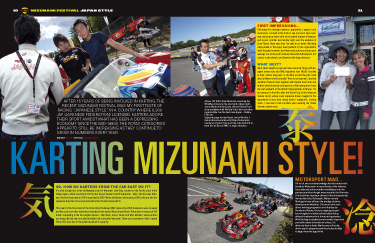 MIZUNAMI FESTIVAL - Japan style
After 15 years of being involved in Karting, the recent Mizunami Festival was my first taste of racing “Japanese style”. In a country where 6,300 JAF (Japanese Federation) licensed karters adore their sport amidst what has been a depressing economy since the mid-1990s, the Rotax categories appear to still be increasing as they continue to grow in numbers every year. 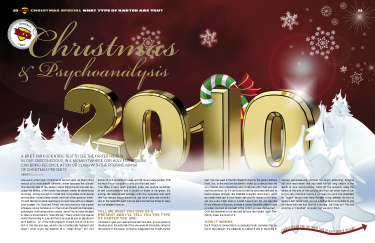 CHRISTMAS SPECIAL - What type of karter are you?
A brief para-scientific test to see the karter hidden in our subconscious, in a moment where our holy enthusiasm can bring reconciliation or clash with the profane mania of Christmas presents. 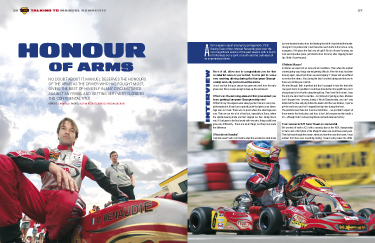 TALKING TO - Manuel Renaudie
No doubt about it, manuel deserves the honours of the arms as the driver who has fought most, giving the best of himself in any circumstance against any rival and getting very very close to the continental title. 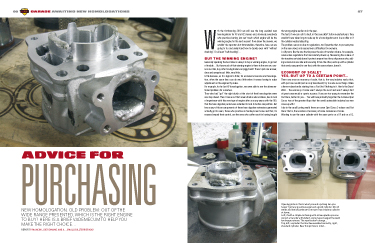 GARAGE - Awaiting new homologations
New homologation, old problem: out of the wide range presented, which is the right engine to buy? Here is a brief vademecum to help you make the right choice… 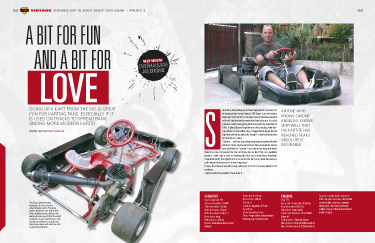 VINTAGE - Doing up a DAP DAP 100 1989 - part 1
Doing up a kart from the 80s is great fun for karting fans. Especially if it is used on tracks to spread panic among more modern karts! 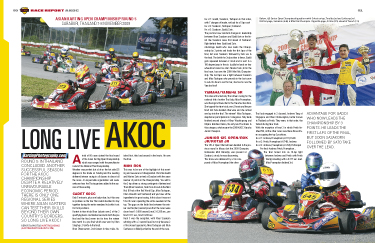 RACE REPORT – AKOC
Round 5 in Thailand concluded another successful season for the AKOC Championship despite a relatively unfavourable economic period. There is only one regional series where Asian karters can test their skills beyond their own country’s borders, so long live AKOC! 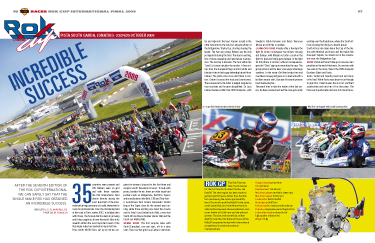 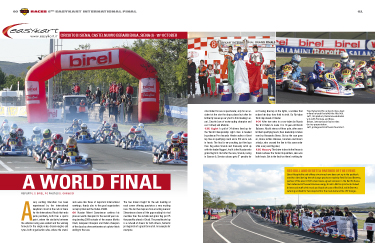 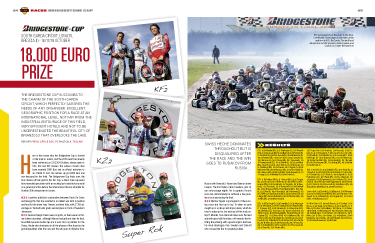 RACE REPORT – Bridgestone Cup
The Bridgestone Cup succumbs to the charm of the South Garda circuit, which perfectly satisfies the needs of any organiser, excellent geographic position for a race at an international level. 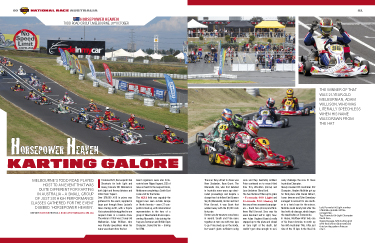 NATIONAL RACES
What a fantastic end of season around the globe. Australia surely features one of the most exciting events of the month, with Formula 100 Nationals, Leopard shootouts and KZ2 racing in the Horsepower Heaven. From the USA, the last Championship Karting International event from Oklahoma handed out the series titles. In England, Formula Kart Stars crowned the season champions. We wrap up the Hungarian national championship and the Polish Easykart Cup, and we report from the Shifter Series and national Max Challenge series in New Zealand.