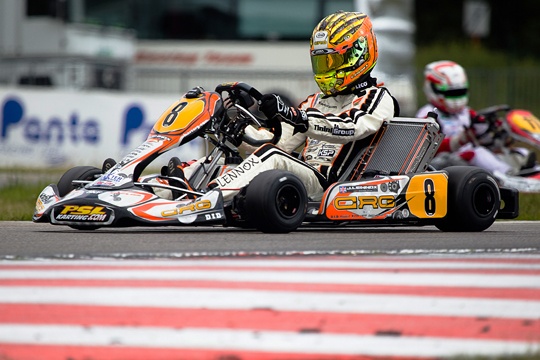 Press Release by: CRG
The await is mounting ahead of the second round of the European KZ and KZ2 Championships to take place in in Germany, at Wackersdorf, on the weekend of 13 July.
CRG is heading there with good potential in both categories. After Genk, Lennox is third in KZ, while Dalè leads KZ2 with full score.

The European CIK-FIA KZ and KZ2 Championships are getting to their heart. After the season opener in Genk (Belgium), the most spectacular karting categories are now ready to compete in Germany on the quite diverse circuit of Wackersdorf that has been the theater of a lot of nice battles in the recent  years.

Wackersdorf's round will take place on the weekend of 13 July as the second of the three rounds of the the European Championship, while the grand finale is set for the end of the month in Sweden at Kristianstad. The final classification will be defined on the basis of the best two results of qualifying heats and on those of the total three Finals. This means that two jokers will be available to drivers, one for the heats and one for the finals. The race of Wackersdorf is therefore going to be crucial for the classification.

CRG works team in KZ will include Jordon Lennox-Lamb, who has been particularly competitive so far and has pocketed a very good third place in Genk, and Felice Tiene, at the debut this year in the European KZ as he holds a wild card due to his participation in the European KF Championship. Both Lennox and Tiene will employ Maxter engine units equipped with the latest updates that are offering good performances.

In Germany, CRG will also be represented by the Belgian driver Yannick De Brabander (CRG-TM) and by the Dutch Jorrit Pex (CRG-TM), as the latter – fielded by CRG-Holland – is a sure candidate to slide among the main protagonists of Wackersdorf, venue where he won the European title back in 2012.

Team DTK will line Davide Forè (CRG-TM) up, who has been among the front runners in Wackersdorf during last week's race valid for the German Championship. Forè has been in fact very quick and clinched the victory of the first Final. The Italian driver had to give up in the second Final though as he was hit from behind at the first corner, but his performance has been quite encouraging ahead of the race valid for the European championship of this coming weekend.

Andrea Dalè has been the absolute ruler in KZ2 of Genk's opener on CRG-Maxter and has been absolutely uncatchable by everyone. The goal for Dalè is now to repeat the good performance put in at Genk and, perhaps, to secure the title. We will see if the Italian driver will manage to complete the feat but, for now, one thing is set: Dalè displayed a good superiority in Genk posting laptimes that were even quicker than those of KZ!

Fabian Federer will also be racing in KZ2 among the ranks of CRG works team on CRG-Maxter. He has produced a very good performance in Belgium where he deservedly got a podium finish. The main goal for Federer will be to get a good result in Wackersdorf and recoup some ground in the classification where he is currently fifth. The Spaniard Pedro Hiltbrand will also be present in Germany on CRG-Maxter.

All results and Live Streaming will be available on www.cikfia.com and www.cikfiachampionship.com