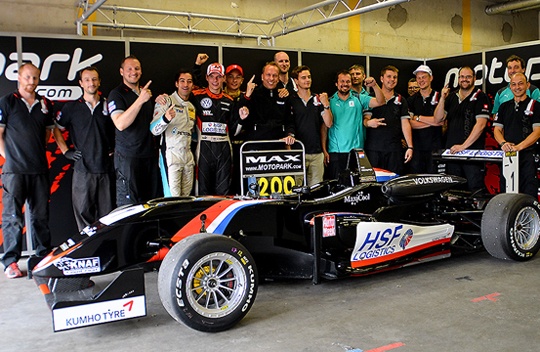 Press Release by: P1 Racing Services
Max Verstappen claims the prestigious Formula Three Masters at Zandvoort – in a car entered by Team Motopark. Winning in the dunes was a special feat for Timo Rumpfkeil’s outfit: It was the team’s 200th win.
When Max Verstappen took the chequered flag at Zandvoort this Sunday, Timo Rumpfkeil had a big lump in his throat. Even the hard-nosed team principal from Lower Saxony felt a rush of emotion at the end of the Formula Three Masters: Max Verstappen, the 16-year-old son of former Formula One ace Jos, had just written a chapter of team and motorsport history. The win at Zandvoort was the 200th victory for Rumpfkeil’s outfit.

Timo Rumpfkeil founded the team back in 1999. He built a brand new headquarter right at the premises of the then-new race track at Oschersleben, opposite the main gate. Already in year one, his team clocked the first victory – in a category called Formula Koenig, which at the time was Germany’s most important feeder series for Kart drivers to make their first foray into single-seaters. The Formula Koenig category came to fame because Michael Schumacher cut his teeth there as a rookie, too. Rumpfkeil’s first ever victory came through the hands of Jason Altzman – an exuberant American who later on became Safety Car driver with the American Le Mans Series.

In the following years, the team grew bigger and bigger. Formula Renault became it’s home away from home. Christopher Brueck and Tobias Pfister – nowadays well-reknown experts fort he infamous Nuerburgring Nordschleife – scored the first one-two in 2001, and in 2004, the team celebrated it’s maiden title wins in both the German and the Formula Renault EuroCup.

Soon, the talent scouts of the big Formula One teams noted the abilities of Rumpfkeil’s team. Both Red Bull and Lotus entered a cooperation to let Rumpfkeil and his taff nurture and teach the young talents from their respective driver development programs. Suddenly, stars of the future became regular pupils: Kevin Magnussen, Valtteri Bottas, Sébastien Buemi, António Félix da Costa, Bruno Senna and Filipe Albuquere among them. Bottas won both Formula Renault titles in 2008, Magnussen was part of the squad which clocked the 100th win in 2010.

Similar to young racing drivers, the team climbed the ladder of talent. Formula Renault was succeeded by Formula Three, then GP2 in 2013 – where they won the teams’ title in it’s maiden season.

Entries in the Porsche Supercup or at the Nuerburgring 24 Hour Race proved successfull, too. But the main breeding ground for Rumpfkeil’s team remain feeder series on the way up to stardom. In the meantime, Team Lotus-Motopark has earned a reputation as one of Europe’s best addresses for young talents. This goes down to a picture-perfect use of every possible resource. The team has got a full Driver-in-the-Loop simulator, uses onboard video studies as well as the best available data logging and analysis systems. At the same time, team principal Timo Rumpfkeil puts his own long lasting experience as a former race driver to good use. He and hs crew of engineers and mechanics have got a very special feeling for the needs, requirements and problems of young drivers. Thus, the staff can teach the young guns all that’s necessary to drive or set-up a race car – but they can also train the so-called soft skills of their young pupils, who can sometimes be surprisingly sensitive or even shy and insecure.

Rumpfkeil and his team show the young drivers how to work hard and play hard. This reflects in an impressive roll of honour of young drivers who have it to F1 or other professional categories. The 200th win at Zandvoort is a milestone. But, as Timo Rumpfkeil put it after the flag was thrown, „the best is yet to come.“