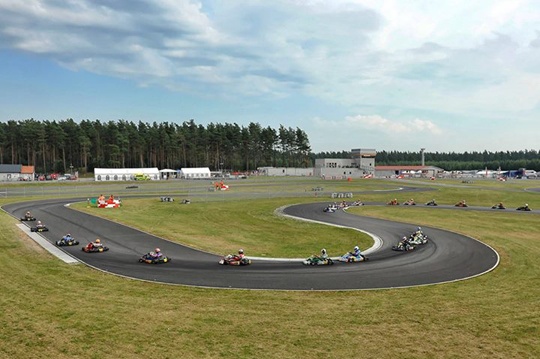 For the CIK-FIA European KZ and KZ2 Championships, as well as the CIK-FIA Karting Academy Trophy, the German Competition marks the mid-point, and securing positions in the provisional rankings or making up for a less successful first Competition are important. Anything is still possible, which produces the sporting interest of a Competition as important as the one at Wackersdorf.

Most Drivers in KZ and KZ2 know the Bavarian track, renowned for its natural selectivity and the risk of rapid weather changes in the region. A dramatic Competition and rigorous organisation can be expected at Wackersdorf.

Among the leaders in the KZ category, the Italian Marco Ardigo (Tony Kart-Vortex-B'stone) took the lead at Genk, winning the Prefinal and Final, but his lead is only 4 points over the Belgian Rick Dreezen (Zanardi-Parilla-B'stone) who was also convincing. Ranked 3rd and 4th, the Briton Jordon Lennox-Lamb (CRG-Maxter-B'stone) and Dutchman Jorrit Pex (CRG-TM-B'stone) should watch their backs for likely comebacks from fast but unlucky drivers in Belgium such as the French Arnaud Kozlinski (Intrepid-TM-B'stone), the Dutchman Bas Lammers (Formula K-Parilla-B'stone), the Belgian Jonathan Thonon (Praga-Parilla-B'stone) and the Italian Paolo De Conto (Birel-TM-B'stone). Note the participation in this Competition of the Italian Felice Tiene (CRG-Maxter-B'stone) who is also racing in KF, using his wild card here as the 2014 regulations allow.

After his overwhelming dominance in KZ2 at Genk, the Italian Andrea Dalè (CRG-Maxter-B'stone) arrives in Germany as the favourite, and as the man to beat to maintain any opportunity in the title race. To respond to him, the Dane Andreas Sebastian Hansen (Tony Kart-B'stone) is now best placed ahead of the Swedish Douglas Lundberg (Alpha-Parilla-B'stone), the Lithuanian Simas Juodvirsis (Energy- Maxter-B'stone), the European Champion at Wackersdorf in 2012, and another Italian Fabian Federer (CRG-Maxter-B'stone). Other drivers are expected to be in great form for this second European Competition. This is particularly true of the Czech Jan Midrla (Birel-TM-B'stone), the Dutchman Guust Specken (Intrepid-TM-B'stone) or the German Dominik Schmidt (Energy-Vortex-B'stone) while we hope for revenge for the Italian Marco Zanchetta (Maranello-TM-B'stone), who missed out on the battle in Belgium. Eight Drivers have entered just for the Competition in Germany.

In the CIK-FIA Karting Academy Trophy, suspense is inevitable as the hierarchy is far from being established between the young talents - from 13 to 15 years - of 32 nationalities, who have been fighting on one-make and randomly drawn Parolin-FIM-B'stone karts. The Japanese Kakunoshin won the Finals in Belgium, but the Dutchman Rinus Van Kalmthout is leading the standings, while the experienced Turkish driver Berkay Besler follows closely in third position. Faced with Drivers who are already experienced like the Dutchman Richard Verschoor, new talents could cause surprises now they are past the learning phase of the first Competition. In this context the performances of the British Ross Martin and Oliver York, the Brazilian Murilo Della Coletta and the South African Bradley Lienbenberg should be watched closely, among others.