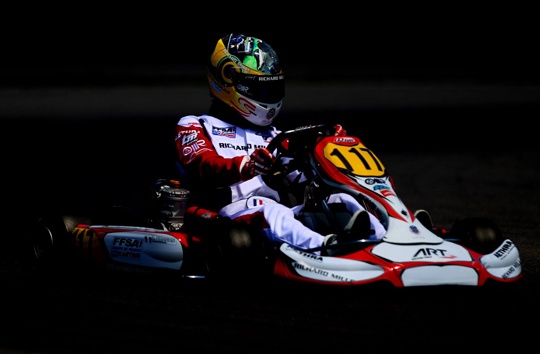 Press Release by: Art Grand Prix
Outstanding performances in KZ and KF put the ART Grand Prix boys in the limelight at the European Championships round in Belgium. As Hanley ends the weekend with a strong top-5 result in prefinal and final, Torsellini (KZ) and new addition to the team Darras (KF) charge through the field to close the final in 6th after hard-fought prefinals.
In KZ, Hanley and Torsellini produced the maximum effort already in Qualifying, yet having to settle for 17th and 13th fastest respectively on the twisty Belgian circuit. With only two heats to decide prefinal starting grid, the Brit made a brilliant effort sweeping through the field to close in 8th, the Italian rounding up the top-10. In the second heat, as Hanley managed to make up 6 positions, Torsellini had to retire with a mechanical failure while fighting for the top-10. A deceitful end that forced the Italian to start the prefinal from P20, with Hanley on a promising P7 starting grid.
Comes the prefinal, and after a first lap carnage forcing out as many as 6 drivers and also flushing back Torsellini, Hanley looked strong fighting hard with the leading group. As Torsellini came back up to finish 19th, the Brit had made a point in shadowing Dreezen for the entire race ultimately closing in 5th.
The final was Torsellini’s masterpiece! Already in the top-10 after 5 laps, the Italian started tailing his teammate in a matter of few laps, both pushing each other to climb to P5 and & 6, lapping consistently in the 53”1! A massive display of speed and determination that sees the two drivers sitting in 5th and 7th place in the championship.
Pairing Torsellini’s masterful comeback, Frenchman Julien Darras put up a brilliant performance in KF for the 3rd round of the European Championship. Had he avoided a few contacts in Heat 2 and 3 after a strong 8th place finish in the first one, he could have undoubtedly aimed at the final podium. In fact, P22 on prefinal starting grid came short of expectations, particularly after he stopped the fastest lap in Heat 2 while moving up the field.
Always in contention at the top, the French driver’s effort was frustrated in prefinal after getting tangled up on a street fight at the back of the field, which saw him making up only 2 positions. The final proved completely different, and after a strong start that saw him climbing up to 12th in the first lap, the French could chase the leading group setting the pace. After a 6-lap scrap for 5th, Darras settled for 6th worth 13 championship points.
The Frenchman’s performance made the ART Grand Prix camp hopeful for more top results, but lady luck was not on Japan’s Takuya Okada side, who despite a consistent heat session, was forced out in both prefinal and final. ART Grand Prix Finland’s duo Tujula and Moilainen coupled good pace with few too many contacts, as only the former managed to go through to the final, which he closed in 17th place.
In KZ2, Sam Webster demonstrated his talent and the high performance level of the ART Grand Prix equipment by hitting a fine series of results in the heats, only spoiled by a few contacts in the final stages of the weekend. With three P10 finishes and a 13th, the Brit started the prefinal from 12th, which he closed in 10th. A two-prefinal system would mean that he started the final from 19th, but a contact on lap 3 frustrated his comeback efforts, forcing the Brit to lap in the back group for the entire race.
Armando Filini (Team Manager)
“Yet another consistent weekend for our team in all categories. I believe the win is just around the corner for us, we have to keep pushing and work hard, and it will come to us. Our equipment proves time and again to be up to the task, our drivers have shown they can fight at the top, so it’s just a matter of time. At this level, small details make the difference and our team is there to improve on every little thing that will allow us to win.”
ART Grand Prix next race
13/07 – CIK-FIA European KZ-KZ2 Championships Rnd.2, Wackersdorf (DEU)