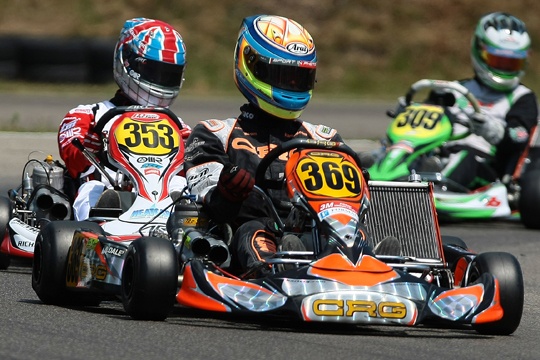 Press Release by: CRG Racing Team
Following the pole position, Dalè had the upper hand in KZ2 where the privateer driver secured a poker of victories on CRG-Maxter. Federer has also been very strong, despite a DNF that penalized his classification in the heats. Lennox put in a great comeback race in KZ. Tiene was sent out in a heat of KF and will be forced to start the Prefinal from P19.

CRG colors had a very positive eve of the first round of the European Championship, race that is currently underway in Genk. In KZ2 Andrea Dalè, privateer driver on CRG with Maxter engine, took the luxury of winning three heats on Saturday, following the pole position and the victory in the first heat on Friday.

DALE' MAKES IT A POKER IN KZ2

Thanks to a poker of victories, Dalè is going to be the number 1 contender for the KZ2 Final stage on Sunday. He gave a stunning proof of how even a privateer driver – when provided with the right material (i.e. CRG chassis and Maxter engine) – can come to the fore in a tight championship like this European whereby he kept 78 other drivers behind.

The 2011 European Champion Fabian Federer, also on CRG-Maxter, had a solid day and secured two second places and a third in the heats. Unfortunately, a retirement in the first heat on Saturday due to a technical problem to the shift relegated the Italian driver to the 16th place at the end of heats.

Some tough luck also hit Daniel Formal, who was forced to an early retirement in his final heat on Saturday due to an incident. The CRG Holland driver Fiin Kooijan, on CRG-TM, is tenth instead.

STUNNING COMEBACK FOR LENNOX IN KZ

Jordon Lennox-Lamb, on CRG-Maxter, produced a very good comeback race as he was tenth in qualifying and climbed up to fifth after the two heats, as he now stands behind Kozlinski, Dreezen, Ardigò and Thonon. The sixth absolute place is currently held by Jorrit Pex, on CRG-TM, who is ready to charge in the final stages.

Yannick De Brabander (CRG-TM) is currently ninth absolute, while Davide Forè (CRG-TM) is standing in 15th place after the heats. The two CRG drivers will be starting from the back, but are definitely not to be ruled out of the games for Sunday's Prefinal and Final.

TIENE READY TO COUNTER IN KF

Felice Tiene has been very unlucky in the first KF heat of the day as he was stopped by an incident. He later on claimed the sixth place in the other heat and this result, together with the second place harvested on Friday, earned him the 19th absolute place after the heats. Things are not going to be easy, but the very quick lap times set by Tiene allow for optimism ahead of Prefinal and Final.

Callum Ilott, on Zanardi-Parilla will be starting from the pole position. Among the other CRG drivers, Dionisios Marcu earned access to the final (he is 25th), while Pedro Hiltbrand has been forced to partake in the repechage race due to a technical problem (from twentieth to third!).