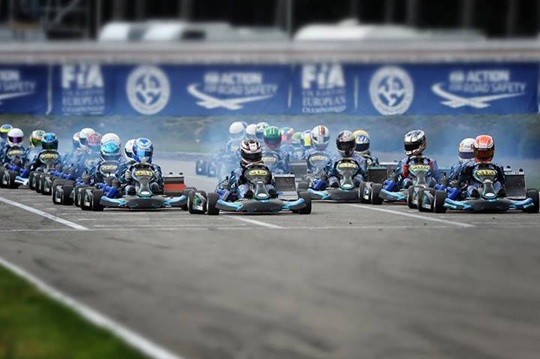 Press Release by: FIA Karting
The Competition programme for Genk is breathtaking. The list of entries includes 243 Drivers in 4 categories, from 41 countries on 5 continents.

The CIK-FIA European Championships will be the first of three Competitions on the calendar for KZ and KZ2, while KF will already be competing in the third of their four Competitions of the season. The Belgian circuit will also host the start of the 2014 CIK-FIA Karting Academy Trophy, with a very significant increase in participation.

A plethora of contenders in KZ2

With 82 entered the battle promises to be very open in KZ2 this year. Among the most prominent Drivers are Joel Johansson (Righetti-Parilla-B'stone), Vice-Champion in 2013, Marco Zanchetta (Maranello-TM-B'stone) one of the two main protagonists of last year, Daniel Bray (GP-TM-B'stone) 3rd in the International Super Cup, Douglas Lundberg (Alpha-Parilla-B'stone), Jan Midrla (Birel-TM-B'stone), Dominik Schmidt (Energy-Vortex-B'stone), Simas Juodvirsis (Energy-Maxter-B 'stone) the 2012 Champion, and Fabian Federer (CRG-Maxter-B'stone), who won in 2011. Originally from Costa Rica, Daniel Formal (CRG-Maxter-B'stone) is one of the Drivers looking to make progress, along with other young people like Luca Corberi (Kosmic-Vortex-B'stone), Alessio Piccini (Tony Kart-Vortex-B'stone), Stan Pex (CRG-TM-B'stone) and Amaury Bonduel (ART GP-TM-B'stone). A rare female in 125 gearbox, the Luxembourg driver Melissa Calvi (CRG-TM-B'stone) began in the CIK-FIA Academy Trophy in 2012.

Duel expected between Nielsen and Norris in KF

The top two in the provisional ranking of the CIK-FIA European KF Championship, Nicklas Nielsen (Kosmic-Vortex-Dunlop) and Lando Norris (FA Kart-Vortex-Dunlop) are neck and neck with 44 points each, going into the third of four Competitions of the season. Always very efficient, Niko Kari (Tony Kart-Vortex-Dunlop) is only two points off the leaders, while Tom Joyner (Zanardi-Parilla-Dunlop), the reigning World Champion, is part of an ambitious trio on equal points (37) in the fourth position with his recent victory on Spanish soil ahead of Callum Ilott (Zanardi-Parilla-Dunlop) and Felice Tiene (CRG-Parilla-Dunlop). Genk should mark a turning point in the title race and it is not too late to see some twists.

A great year for the CIK-FIA Karting Academy Trophy

A development and detection platform for young drivers between 13 and 15 years, the CIK-FIA Academy Trophy is very popular in 2014. With 50 entries and 32 countries represented including newcomers to international karting like South Korea, Iran, Israel and Lebanon, the results are already positive. We can expect good performances from Drivers who already know the European circuits such as the Dutch drivers Richard Verschoor and Rinus Van Kalmthout, the Brazilian Murilo Della Coletta, the British Ross Martin, Switzerland's Lucas Légeret, the Turkish Berkay Besler and Spain's Marta Garcia Lopez, who was selected by the Women in Motorsport Commission of the FIA. For others, learning and surprises are in prospect for the first of three Competitions this season. All these drivers will compete on an equal footing, driving identical Parolin-FIM-B'stone karts distributed after a draw.