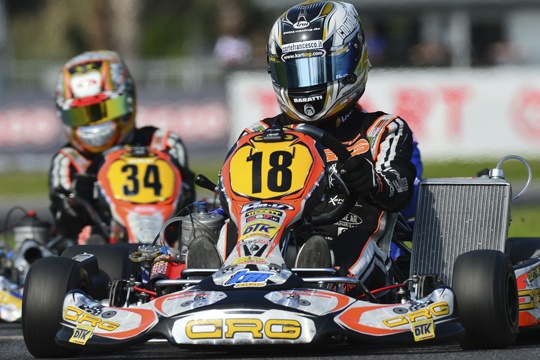 The double European Championship of categories KZ and KZ2 is going to start this coming weekend in Belgium, at the circuit of Genk. CRG will get to this appointment fielding its full potential to keep its momentum as leading force, as witnessed by team's long palmares in the history of karting.

CRG has a long series of victories in the categories with the shift, it is in fact the most victorious brand thanks to its 19 European Titles won since 1979. The Italian firm is also the reigning KZ Champion thanks to the victory of the 2013 campaign with Max Verstappen.

CRG TEAM FOR THE EUROPEAN KZ AND KZ2 CHAMPIONSHIPS

CRG works team for category KZ will be composed by the Briton Jordon Lennox-Lamb that is the 2012 KZ2 World Cup winner, by the Dutch 2012 KZ1 European Champion Jorrit Pex, by the several times world champion of direct drive categories, Davide Forè, who will be racing with the Polish team DTK, and by the Belgian driver Yannick De Brabander, who has been 2011 KZ1 Vice-World Champion on the very same racetrack of Genk. This attack team will be completed in KZ2 by Fabian Federer, who has been KZ2 European Champion in 2011 and by Daniel Formal, the driver from Porto Rico that has claimed several International tiltes and has been 5 times USA Champion in Rotax Categories.

The European KZ and KZ2 Championships will be run on three rounds this year. The season opener of Genk (Belgium), to be held on 15 June, will be followed by the round in Wackersdorf (Germany) on July 13, and by the final round in Kristianstad (Sweden) on July 27. The World Championship of the two categories will take place in one round only, tol take place in Sarno (Italy) next October 12.

The third round of the KF European Championship will also take place in Genk this coming weekend, following the first two rounds held in La Conca and Zuera. The rich racing programme of Genk will be completed by the opening round of the Academy Trophy.

CRG hopes for the KF European Championship are pinned on Felice Tiene, who is currently sixth in the standings 7 points short of the leader, as well as on the Spaniard Pedro Hiltbrand, eighth in the championship at 20 points from the top, and on the Romanian driver Dionisios Marcu.

Starting from this race, several CRG drivers will have their engine prepared by KVS with the objective of improving further the race performance, while granting the best possible technical assistance track-side.

After the round of Genk, the European KF Championship will reach its conclusion next August 31 in England, at the PF International Circuit. The World Championship will take place in one round only, to take place next September 21 in Essay (France) in a joint event with the KF Junior's.

REGULATIONS. Regulations of the KF and KF Junior European Championship follow the same scoring scheme of European KZ and KZ2, that is, they award points after qualifying heats and Final also allowing a joker for the heats and one for the Finals.