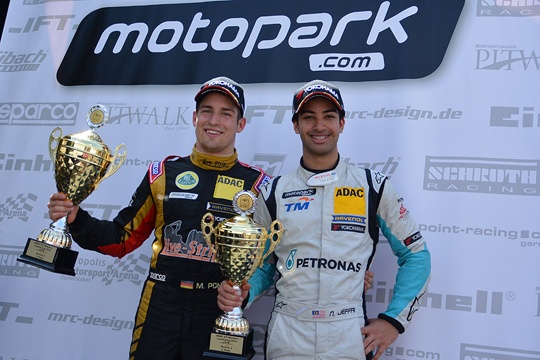 Press Release by: P1 Racing Services
Markus Pommer extended his lead in the German Formula Three Cup – by winning two out of three races on the EuroSpeedway Lausitz.
Team Lotus-Motopark dominated the weekend on the huge oval north of Dresden. Markus Pommer clocked two fastest laps in either qualifying sessions. And he won two races in spite of nursing some minor troubles throughout.

Pommer missed the start of heat one due to technical gremlins and had to let his team-mate Nabil Jeffri go. Pommer suffered from a misfire and nursed his car home in fourth.

Pommer backed that up with two wins in the remaining races. He had to fight back from second after missing the start in heat two. His third victory was a clear lights-to-flag affair.

In race one, meanwhile, Nabil Jeffri held the lead until his car suffered from brake problems. Indy Dontje tried to pass his team-mate but the two of them touched. Jeffri hat to retire in the pits, Dontje saved second spot.

In race two, Dontje came home second again.  In the third heat, he couldn’t get off into the formation lap because another driver had stalled in front of him. He had to gate last but forced his way up to fourth again. Similar to Pommer in the overall standings, Dontje cemented his lead in the Rookie Challenge.

Jeffri suffered from a spin in race two and finished eighth. He finished the weekend on a high with P2 in the final heat. Andres Mendez saw the flag in fifth, ninth and eighth position respectively.