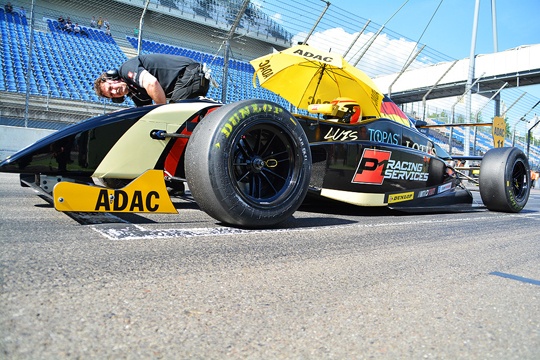 Pole setter Dennis Marschall took the lead from the start and ran away with it, celebrating his first ever win since he graduated from karting to single seaters. "It was a lot hotter than in previous heats, which seemed to help us big time," says Marschall, who had finished 12th – following a spin – and eighth in the first two races of the weekend. "Suddenly, we found ourselves with a better speed and balance. I managed to pull a gap in the early stages. At first, I wasn’t sure whether someone could close in from behind – but luckily, I maintained my lead."

Behind Marschall, Luis-Enrique Breuer finished second. The youngster from Berlin left a lasting impression during what was his first-ever weekend in ADAC Formula Masters. In heat one, Breuer had to fight back after he ran down an advertising post; follwing his excusion, he reclaimed four positions. In heat two, he started dead last after stalling on the formation lap – and still finished seventh. "I’m lost for words," grinned he. "Although I started from second on the grid, I didn’t dare thinking about a podium finish. My start wasn’t great – otherwise I could even have been in a position to challenge Dennis Marschall in front of me."

Joel Eriksson started Sunday’s race from third but couldn’t cash in on his grid place. Following a rough move by an opponent, the Swede fell back to seventh. He had finished the previous heats on sixth and seventh, too.

Eriksson’s place on the rostrum was inherited by team-mate Ralph Boschung, of Switzerland. Before that, he had to make do with a fifth place and a retirement following a controversial drive-thru due to track limits. In heat three, Boschung then took no prisonsers: He stormed from last on the grid to third on the rostrum. "This feels like a win for me," he said. "Our pace wasn’t brilliant all throughout the weekend. But after we changed something on the set-up for Sunday’s race, the car went significantly quicker. I managed the confusion in the first couple of laps to make up a lot of ground. Had the race been slightly longer, I might have even fought for the win."