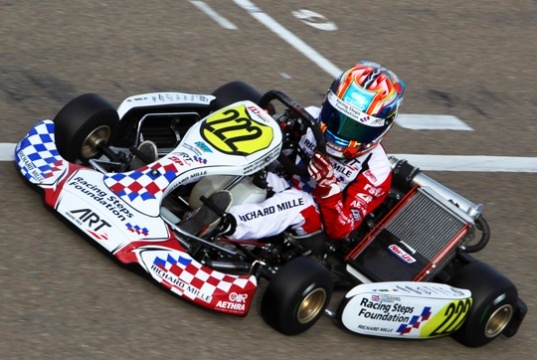 Press Release by: Art Grand Prix
Positive outing for the team managed by Armando Filini in the second round of the European KF-KFJ Championships in Zuera. With consistent pace and good heat results in both classes, the ART Grand Prix boys can look forward to a second part of the season on the rise.
In KF, if timed practice continues to prove a hard nut to crack with 21st placed Tuomas Tujula the fastest of ART Grand Prix drivers, the heat session is starting to bear some fruits. ART Grand Prix Finland Moilainen proved best of the lot after the heats with two top-10 results, just like Japan’s Takuya Okada who without the last heat DNF could have aimed at a better starting position for the prefinal. The second chance heat proved almost a formality for the two drivers, who had to start the prefinal from 31st and 33rd respectively. A few crashes were fatal for Haapalainen, Tujula and Klar, who did not manage to go through to the final phase as a result.
A superb start saw Moilanen and Okada leapfrogging through the field making up several places. A consistent race conduct would grant the two a better starting position for the final, which saw both Moilanen and Okada shoot off superbly at the green lights. With Okada dropping few positions in the early laps, and Moilainen holding on to his position, positions would be inverted at the halfway mark. Okada made several passing manoeuvres stick to clinch the 17th position at the flag, while Moilainen was victim of a race contact that dropped him to the last place closing in 28th.
Like in the senior class, two KFJ drivers stood out in the heats. Josh Smith of Racing Steps Foundation program was the best of the lot grabbing four top-10 results, marking a decisive improvement from previous races. Also ART Grand Prix Finland’s Paavo Tonteri proved extremely consistent clinching two top-10 finishes and a 12th but his record was spoiled by a first corner accident in the last heat that forced him to retire. While the two went straight to the final phase with 17th and 24th grid position respectively, China’s Yifei Ye and Finland’s Patrick Pasma had a tougher outing in the heats as a result of a difficult qualifying session.
Massive comebacks for Smith and Tonteri in the prefinal were as clear a sign of strong drive and determination, paired with the high competitiveness of the ART Grand Prix/Tm package. Sweeping through the field, the Brit managed to close in 10th and the Finn in 16th after an exciting race.
The final would not prove as kind to both, with Smith dropping to the back of the field at the start, where he would be engaged with several hard scraps for the rest of the race, and Tonteri suffering similar faith at the start and having to retire with 3 to go.
Armando Filini (Team Manager)
“The weekend in Zuera was not entirely satisfactory for us. We were aiming at something better in the final, our drivers were in a good position to get some points in the championships, particularly Smith in KFJ and Moilainen in KF, but some contacts worked against us in the end.
We will now concentrate on the opening round of the European KZ Championship in Genk in a few weeks time, where we will continue to show the top performance of our equipment.”
ART Grand Prix next race
15/06 – CIK-FIA European KZ-KZ2 Championships Rnd.1 & European KF Championship Rnd.3, Genk (BEL)