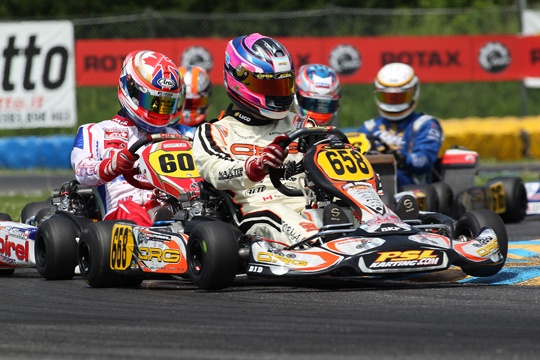 Press Release by: CRG
Stunning race by Felice Tiene in Zuera (Spain) that confirmed to be among the title contenders in the European KF Championship. Jordon Lennox-Lamb strong protagonist in DD2 at the Rotax Euro Challenge in Castelletto.

Last weekend has seen a double and exciting challenge for CRG, that has been racing in Zuera (Spain) at the European CIK-FIA KF & KF Junior Championship as well as in Castelletto di Branduzzo (Italy) for the Rotax Euro Challenge. CRG works team has been protagonist in both racing rounds proving to be competitive once more, while harvesting solid results in Spain's KF with Felice Tiene and in Italy's DD2 with Jordon Lennox-Lamb. Both racers are well within the fight for the corresponding titles.

Felice Tiene has been one of the main protagonists of the weekend in Zuera's European Championship, putting his name forward for the title. The Italian driver run a solid qualifying, where he secured the third place in his group and the sixth in the absolute standings. He then unleashed all his potential  in the heats setting the absolute best performance: 3 splendid wins out of 4 races earned him 10 precious points for the championship. In the Prefinal, Tiene was again in the leading group securing the fifth place. In the Final he was involved in a series of very good duels  and he finally took  the seventh place. This is quite a handy placing classification-wise, as Tiene is currently fourth only 7 points shy of the leader.

The victory of the race went to Tom Joyner – back to the victory after his triumph in Bahrain that gave him the World Champion title –  who awarded another satisfaction to Tinini Group.

The race of CRG's Spaniard Pedro Hiltbrand has been positive too, as he crossed the finish line in P11 after a very good comeback from the 20th place in qualifying. Sidney Gomez and Dionisios Marcu experienced a series of technical issues in KF and could not get access to the final stages.

The other young Spaniard fielded by CRG, Eliseo Martinez Merono, obtained a good result in KF Junior as he crossed the line in seventh place, after a stunning comeback from an unlucky 47th place in qualifying. His positive trend has been really excellent. The other two drivers on track in Junior, Konstantinos and Archie Tillett, could not overcome the barrier of repechage race instead.

LENNOX CLOSE TO THE PODIUM IN CASTELLETTO

Jordon Lennox-Lamb has been exceptional in DD2, as usual, in the concurrent second round of the Rotax Euro Challenge after the spectacular win he clinched in Genk. The weekend of Lennox set off with the quickest time in his qualifying group that was worth the fourth absolute time. He later on secured the win in one heat and stood in third place of the classification after the heats. Lennox kept the third position all the way to the flag in the Prefinal, while in the Final he fought with the front runners but eventually had to contempt himself with the fifth place after several appearances in third position. Lennox is currently second in the standings at only 7 points to the leader Ben Cooper.

Very good performance by Daniel Formal in DD2. The quick driver from Costarica has always been among the quickest drivers also in Castelletto. Formal has been unfortunately slowed down by an incident in the Final and he ended 14th.

The young German driver Luka Kamali has been quite unlucky instead. He has been very good in qualifying and heats, where he gained the fifth absolute time. But due to strong pain to his ribs he was forced to give up and skip the final stages.

The Canadian Alessandro Bizzotto has been very quick too in DD2, but he rolled over in the last qualifying heat and had to run the Repechage race. Unfortunately he missed to gain access to the final by two positions only.

The Belgian driver Yannick De Brabander and the Polish Lukasz Bartoszuk have been competing in Rotax Senior. Both drivers managed to get the pass to the final stages but due to several problems De Brabander ended the Final in P20, while Bartoszuk had to retire after being 17th in the Prefinal.

The young driver from Equador José Enrique Brito has been very quick since qualifying in Rotax Junior, when he set the seventh absolute time. He was fourteenth at the end of heats, but his final stages were quite unlucky as he at to retire in the Prefinal and then a 5 seconds penalty relegated him to P26 after a very good comeback race.