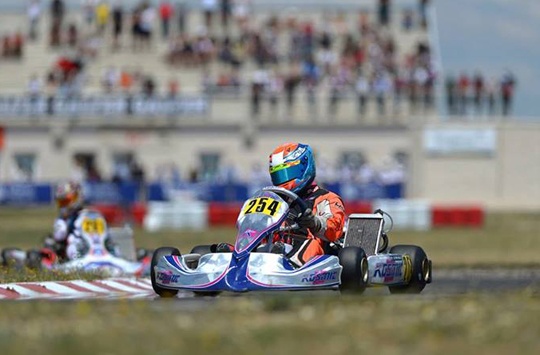 Press Release by: FIA Karting
The second Competition of the CIK-FIA KF and KF-Junior European Championships in 2014 kept its promises. The fast Spanish circuit of Zuera not only produced new winners, Tom Joyner in KF and Anton Haaga in KF Junior, but also opened up the struggle for the two European titles.

The expected new scenario has occurred in Spain at Zuera, for the favourites who emerged at the first Competition that took place at La Conca. Multiple twists in the story affected the sporting and dramatic intensity of the event under the Aragon sun. The longest track of the season at 1700 m, the Zuera circuit strained equipment and Drivers. There were three different chassis brands and three engine brands among the Drivers on the podium in each category. The 2014 CIK-FIA European Championships will have elevated standards of racing.

Joyner back in the title race

The 2013 CIK-FIA KF World Champion has demonstrated a special talent of being in the right position at the right time. At Zuera, Tom Joyner (Zanardi-Parilla-Dunlop) was always among the fastest. 8th in Qualifying Parctices, he was 5th after the Qualifying Heats before finishing 3rd in the Prefinal. In the Final, the British Driver took the lead on the 8th of the 18 laps, then escaped permanently to victory, crossing the finish line more than two seconds ahead of his pursuers. His compatriot Callum Ilott (Zanardi-Parilla-Dunlop) set the fastest time, however, the Italian Felice Tiene (CRG-TM-Dunlop) was leading at the end of the Qualifying Heats, and the Dane Nicklas Nielsen (Kosmic-Vortex-Dunlop) won the Prefinal. So the Competition was always open. Ilott was forced to retire in the Prefinal and could not make up the ground in the Final. Tiene proved to be less competitive in the Finals, while Nielsen fought to the end of the Final to retain his second place against the Italian Alessio Lorandi's (Tony Kart-TM-Dunlop) recovery from 9th position.

"I did not expect to win here especially," explained Tom Joyner at the press conference. "I learned long ago that the most important thing in racing is to persevere no matter what the circumstances. This is the best attitude for a Driver. I was not the fastest at Zuera, but I still managed to win!"

In the provisional standings of the Championship, Nicklas Nielsen ranks first equal on points (44) with Lando Norris, Niko Kari is in third position, two points ahead of three Drivers with 37 points each: Tom Joyner, Callum Ilott and Felice Tiene.

Haaga, a revelation from Sweden

A Driver unaccustomed to international awards starred in KF-Junior throughout the Spanish weekend. 15 years old, the Swede Anton Haaga (Kosmic-LKE-Vega) hasn't had the opportunity to compete in full seasons in 2012 and 2013 due to accident injuries. His sense of attack had been noticed earlier this year, but this is the first time that it translated into a great victory, essentially in a small family team. It is also the first success for an LKE engine at this level. Haaga was first took second in Timed Qualifying, before an uninterrupted series of wins. His four consecutive fastest laps in the Qualifying Heats attest to his performance. Winning on his own in the Prefinal, he also demonstrated great potential in the battle in the Final. The Briton Daniel Ticktum (Zanardi-Parilla-Vega) and the German Mick Junior (Tony Kart-Vortex-Vega) challenged him for the lead several times, while the Russian Artem Petrov (DR-TM-Vega), as a newcomer to the leading group, and the Belgian Benjamin Lessennes (Kosmic-Parilla-Vega) battled hard. Ticktum finally took the second step of the podium. The other British Driver Enaam Ahmed (FA Kart-Vortex-Vega) took the 3rd step after a superb recovery of 15 positions. The U.S. polesitter Devlin Defrancesco (Tony Kart-Vortex-Vega), meanwhile recovered from 30th to 5th position in the Final, following a Prefinal retirement.

With this, Enaam Ahmed retains the lead in the provisional European KF-Junior Championship with 47 points, with a small advantage of one point from Devlin Defrancesco, Anton Haaga has in one shot moved up to 3rd place with 40 points, Logan Sargeant has 38 points and Daniel Ticktum has 28 points.

KF will race in two weeks in Belgium at Genk for the third of their four competitions, while KF-Junior will wait until the end of July to compete again, this time in Sweden in Kristianstad before the conclusion with both classes at the end August in the UK.