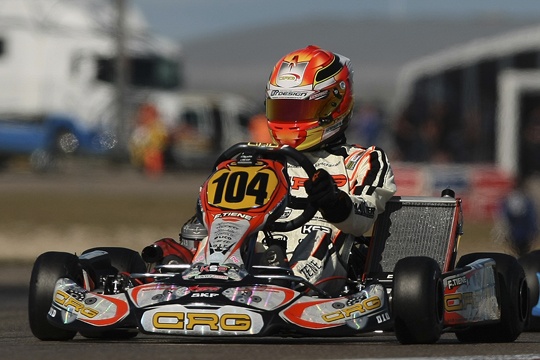 Press Release by: CRG
Felice Tiene displayed a very good shape in Zuera (Spain) during the second round of the European Championship, while, in Italy, Jordon Lennox-Lamb confirmed to be a protagonist in DD2 at Castelletto di Branduzzo's round of the Rotax Euro Challenge.

STUNNING START FOR TIENE IN ZUERA

Felice Tiene put in a very good performance in KF at the CIK-FIA European Championship clocking the third time of his group at just 73 thousands of a second from the pace setter Callum Ilott (Zanardi) and at slightly more than 2 tenths to the absolute quickest time. This has been a good start for the Italian driver in force at CRG who was also the quickest on a TM engine.

The other CRG drivers are currently a bit more delayed: Pedro Hiltbrand posted a time 0.538 shy of the leader, Sidney Gomez ended at 0.717s to the top and Dionisios Marcu at 0.809.

The Greek Konstantinos has been the quickest of CRG drivers in KF Junior. He is always getting more and more at ease in this category after his past in 60 Mini. His quickest lap turned out to be 0.516s slower than that posted by the leader Devlin Defrancesco (Tony Kart). The Spaniard Eliseo Martinez experienced some issues instead and ended at 0.882s to the leader at his home race. The young Briton Archie Tillett currently is 1.126s adrift.

The programme of Zuera's weekend will continue on Saturday 31 May with qualifying heats, while the Repechage race, Prefinal and Final will take place on Sunday 1 June.

Jordon Lennox-Lamb set the pace in his qualifying group in DD2 on the Circuit 7 Laghi of Castelletto di Branduzzo, that is housing the second round of the Rotax Euro Challenge. The British driver of CRG –  already winner of the first round in Genk – ended up fourth absolute in the final qualifying classification, as his quickest time was only 61 thousands shy of the overall best lap posted by Paolo De Conto.

Very good performance also for the German Luka Kamali in DD2, who was only 0.266s shy of the leader, while the American Daniel Formal is a bit delayed at the moment with a quickest time 0.485s slower than that of the leader. Alessandro Bizzotto closed his qualifying effort at 0.750s to the top.

Very positive performance for the Polish driver Lukasz Bartoszuk in Rotax Senior, who set a time that was 0.422s shy of the leader Guan Yu Zhou. Some problems affected instead the strong Yannick De Brabander as he is currently 0.616s adrift.

Jose Enrique Brito put in an excellent qualifying in Rotax Junior setting the seventh time at 0.269s to the top.