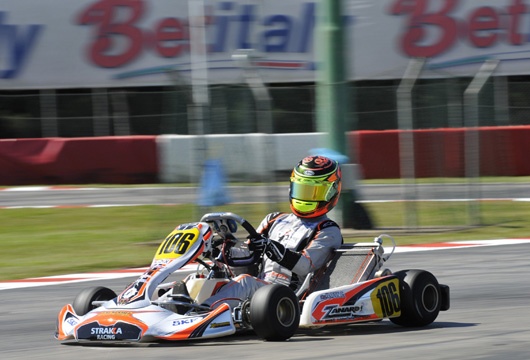 Press Release by: WSK
The first round of the European CIK-FIA KF and KFJ Championship gave its first verdicts. In Muro Leccese (Italy), the Finals ended on Sunday and we had the first standings of the season, determined by the results of Saturday's heats and Sunday's Finals.
Last weekend, on the International Circuit La Conca, the results of the Finals were very different from those of the heats: this is one of the most striking peculiarities of karting, which gave a crucial contribution in levelling the field. So, making predictions is impossible now, before the second round of Zuera, in Spain, scheduled on the weekend of 1st June. To analyse the potential of drivers and karts, it might be useful to watch the delayed broadcast of the event on Rai Sport 2, on Wednesday 14th at 18:05.

Ilott e Norris accendono la sfida in KF
KF had two protagonists taking centre stage alternatively. The English Lando Norris (FA Kart-Vortex) had the upper hand in the heats, ahead of his fellow countryman Callum Ilott (Zanardi-Parilla-Dunlop). They swapped roles on Sunday, when Ilott counterattacked and dominated the Final. Ilott and Norris are first and second in the standing now, with 34 and 26 points. Third the Finnish Niko Kari (Tony Kart-Vortex-Dunlop), far from the top drivers because of a retirement in one of the heats but who then closed the gap and finished second in the Final, a result which gave him 20 points. The Spanish Pedro Hiltbrand (CRG-TM-Dunlop) is only one point behind the Finnish. He was always among the top drivers throughout the whole race.

With 18 points we find the Spaniard's team-mate from Naples Felice Tiene, who achieved an outstanding recovery in the Final. Sixth, with 16 points, Nicklas Nielsen (Kosmic-Vortex-Dunlop); the Danish deserved more than that. He went very close to the podium, but he started losing ground during the last laps of the Final. The Polish Karol Basz (Tony Kart-Vortex-Dunlop) is seventh with 11 points, followed by the Dutch, Martijn van Leeuwen (Zanardi-Parilla-Dunlop) with 10 points. 8 points for the French Gabriel Aubry (Tony Kart-Vortex-Dunlop), who occupies the 9th place ahead of the English  Tom Joyner (Zanardi-Parilla-Dunlop) and the Italian Alessio Lorandi (Tony Kart-TM-Dunlop), tenth with six points each.

Ahmed and Defrancesco duel in KFJ
Also in KF Junior there was a change at the top of the standings after the Final. The American Devlin Defrancesco (Tony Kart-Vortex-Vega) outpaced the rest of the pack in qualifying, but at the start of the pre-final he ran the risk to lose ground considerably. During this phase, the English Enaam Ahmed (FA Kart-Vortex-Vega) made himself conspicuous: he won hands down the Final and gained the top of the standing with 31 points.