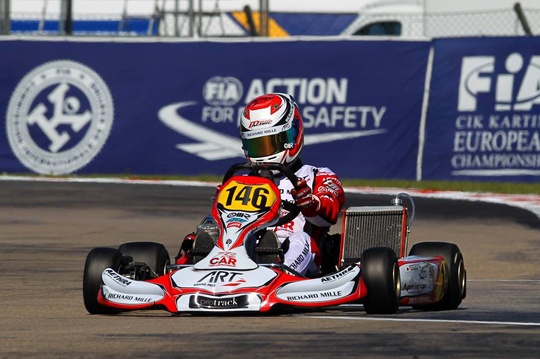 Press Release by: Art Grand Prix
Good results in the heats, consistent pace throughout the weekend and strong determination distinguished the ART Grand Prix boys in the first round of the European KF-KF Junior Championships held at La Conca.

And yet, a few too many contacts deprived the team managed by Armando Filini of better results during the weekend.

In KF, Japan’s Takuya Okada proved the fastest of the lot in qualifying, and then went on to grab a promising top-10 finish in the first heat. Likewise, ART Grand Prix Finland’s trio Moilanen, Haapalainen and Tujula completed the first heat in the top-10, but Tujula was excluded from the heat after being found under weight. The heats carried on with a succession of good results for Moilanen and Tujula, while Okada, Haapalainen and Klar had somewhat of a tough ride getting involved in race contacts that would prove detrimental for the intermediate classification. In fact, only Moilanen managed to go through to the final phase without having to take his chances in the Second Chance Heat, of which Okada was the only survivor.

In the prefinal, the hopeful from Japan did well to make up as many as ten positions in the early stages after starting from the last row. But as the race reached the halfway mark, both him and Moilanen started to fade slightly loosing few positions in the midst of the hard fighting. Nevertheless, the two closed in 27th and 22nd respectively, with a good chance to make up more positions in the final. And the first lap was particularly promising, with Okada moving up to 17th and Moilanen to 15th. But as the fight got more intense, the two were forced out of the race as a result of another collision few laps later.

In KFJ, the trend was similar to the senior class, as some top results in the heats – Josh Smith’s 3rd and Paavo Tonteri’s 4th – were followed by race contacts that forced all ART Grand Prix boys, with the exception of Tonteri, to go through the Second Chance Heat to access the final phase. With Smith out at the first corner, involved in one of the many shunts of the weekend that called for harsher penalties, China’s Yifei Ye and Finland’s Patrick Pasma did try their hardest but did not make it into the top-6 that would be granted access to the prefinal.

So all hopes rested on Tonteri, who after managing to climb up to 15th lapping consistently with the fastest, received a 10” penalty for bad manoeuvre on one of his rivals, dropping him down to 27th. Tonteri’s resolve was not diminished in the final, which saw the young Finn moving fast through the field to clinch a well-deserved 12th place finish, later advanced to 11th.

“The speed was clearly there for most of our drivers, and yet the weekend is low on results. Quite simply, we have to work harder with our drivers in order for them to improve their race tactic, which is just as important as mere speed. Being a fast driver doesn’t necessarily translate into winning races. More often than one would think, avoiding a contact is far more important than overtaking a rival. But this comes with experience and with time spent on track, our drivers can count on a very professional team of experienced people, so I’m confident that results will come in due time.”