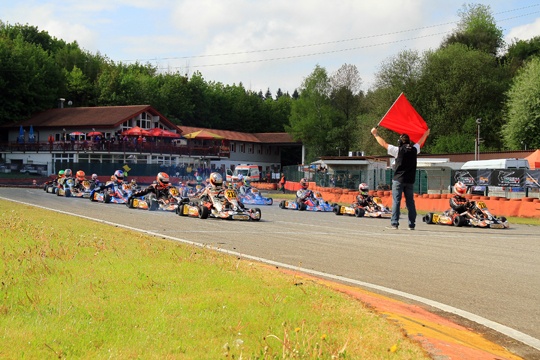 Press Release by: DKM
Last weekend, the German Kart Championship started into its 2014 season on the Schweppermannring in Ampfing. 136 drivers from more than 20 nations drove thrilling races. The three grade series DKM, DJKM and DSKM were quite balanced, counting five winners.

It had been more than six months when the German Kart Championship started into its new year. The 1.060m long track in Bavarian Ampfing was the first one on the agenda. There, the first two of all in all ten ranked races took place under partially difficult weather conditions. The organisers of the DMSB didn’t sleep during the winter months though. Right on time for the start of the season, a new race-control was used. Eleven HD-cameras are now capturing all the events on the track and thereby make for fair driving styles among the drivers.

The racing events were coined by split weather. Cool temperatures and rain caused difficult conditions during qualifying and the heats on Saturday. The clouds had gone by the time of the races on Sunday though. Bright sunshine and a blue sky bestowed perfect racing weather upon the drivers, teams and numerous spectators on the stands. The victories were achieved by five drivers in the evening. Rick Dreezen celebrated a double victory in the DSKM, Thomas Preining and Enaam Ahmed won in the DJKM and Manuel Valier and Jehan Daruvala rejoiced in the DKM.

63 shifterkart drivers had travelled to Ampfing for the DSKM kick-off. Among them two three-time-Champions, who intent to achieve their fourth title this year: Jorrit Pex and Rick Dreezen (both CRG Holland). After the heats, Dutchman Marijn Kremers (AVG Racing Team) had the best chances though. Due to two victories he fought his way to the front on the wet track and was on pole position for the first race. „The heats went very well for me. I’m hoping that we’ll be able to tie in with this on the dry track as well“, said the youngster contently on Saturday evening.

He then had to let his more experienced opponents pass him by during the first race on Sunday though. Rick Dreezen drove to the front from second starting position and didn’t lose this place until the finish line. „This was an amazing race for me. I’m really happy to be starting in the DSKM again. The competition is really strong and this victory has been hard work“, the Belgian rejoiced on the winners’ podium. Reigning Champion Jorrit Pex had reason to worry though. From seventh position, he fought his way forward and managed to drive past repeated World- and European Champion Bas Lammers (Formula K) during the very last lap. The Belgian lost a bit of his performance towards the end of the race and wasn’t able to fend Pex’s attacks off anymore. „I just couldn’t defend myself anymore“, Lammers said later at the finish line. Guest driver Douglas Lundberg (CPS Sport) achieved a great fourth place in front of best German driver Michele di Martino (Energy Corse). The top ten was completed by Guust Specken (IRB Racing), Ricardo Romkema (Energy Corse), Marijn Kremers, Dominik Schmidt (Energy Corse) and John Norris (Mach1 Motorsport).

The second race began a lot less comfortably for kick-off winner Rick Dreezen. Pex and Lundberg temporarily put a lot of pressure on him and were aiming for victory. The Zanardi driver stayed strong though and secured his double success. „It’s been a great weekend, many thanks to my team for the perfect material“, said Dreezen at the finish line. The decision about second place was made on the last couple of meters though. Lundberg und Pex put up a great fight, which ended in favor of Swedish Lundberg then. Bas Lammers was a little too slow: After his third place of the first race, he wasn’t able to keep up with the pace at the front this time and followed on fourth place in front of Verdi Geurts (Solgat Motorsport). The German squad was led by Dominik Schmidt (Energy Corse) on sixth place. Behind him followed fellow countryman Maik Siebecke (SRP Racing Team). After a difficult first race he fought his way forward from 29th to 7th place during the 24 laps. Stefan Ott (CRG Racing Germany) followed on eighth place in front of Simo Puhakka (AVG Racing) and Marijn Kremers.

The youngest drivers presented themselves with an incredible power density in Ampfing. During qualifying, 31 drivers came in within a second. Surprising pole-setter was Thomas Preining (KSB Racing Team) from Austria. He kept all of his international competition at bay during his first KF-junior-race. He then proved during the heats that his success was not a one time thing. In the evening, he had achieved second starting position due to a victory and a fourth place. Only Enaam Ahmed from the British team Ricky Flynn Motorsport was more successful due to two victories and was on pole position. „The competition is really very strong. I love this track and really like driving here“, said a happy Enaam Ahmed in the evening.

The first race on Sunday morning started excitingly. Within the first four laps two German hopefuls had to forfeit the race prematurely: David Beckmann (Morsicani Racing) and Mick Junior (KSM Racing Team). At the front, everything seemed to go best for Enaam Ahmed. The FA-kart-driver set the pace and was on his way to victory. But his pursuer Thomas Preining managed a perfect maneuver. During the 19 laps, he studied his opponent’s racing line and made use of a gap shortly before the end of the race. Ahmed didn’t have a chance to counter-attack and came in on second place behind Preining. Maximilian Fewtrell and Logan Sergeant (both Ricky Flynn Motorsport) drove a quiet race and came in third and fourth. The decision about fifth to eighth positions were unbelievably close though. Four drivers came in almost simultaneously. With an advance of spoiler-length, Michael Kujper (Keijzer Racing) prevailed over Jonas Nielsen (Ricky Flynn Motorsport) and the two fastest Germans Jannes Fittje (PM Racing Performance) and Max Hesse (Solgat Motorsport). Justin Barth (KSM Racing Team) came in ninth in front of Sophia Floersch (Forza Racing).

Kick-off winner Thomas Preining had incredibly bad luck during the second race. During the warm up lap, he had to park his kart due to a technical defect and could only watch Enaam Ahmed achieving his victory. „It’s been a great weekend for us. I’m currently leading the DJKM and am looking forward to the next race in Wackersdorf“, the Brit rejoiced. Michael Kujper and German DJKM-rookie Max Hesse surprised everyone. Due to perfect starts, both of them fought their ways forward and managed to jump on the winners’ podium. Hesse almost couldn’t believe his success at the finish line: „I managed to stay out of all collisions during the first lap and was able to defend my position - unbelievable.“ Maximilian Fewtrell was able to stand his ground against team mate Logan Sergeant. German Sophia Floersch improved her performance to sixth place, followed by Casper Roes-Andersen (TK Racing), Juan Correa (Energy Corse), Jannes Fittje and Carrie Schreiner (Energy Germany).

Jehan Daruvala (Ricky Flynn Motorsport) achieved a strong kick-off at the German Kart Championship. During his first race in Ampfing he achieved the best time during qualifying as well as two heat victories. „The German Kart Championship presents itself very professionally and with strong drivers. My races went very well today. We were able to find the right setup for these moist conditions“, the Indian summed up in the evening. Next to him, Russian Egor Stupenkov (Energy Corse) secured a place in the first starting row. Hannes Janker (TB Motorsport Racing Team) followed as best German driver on third place. The reigning vice-champion had to forgo the free trainings on Friday, but was able the compensate this quickly and was in a good mood during his interview: „Everything went perfectly, third place is a great starting position and gives me hope for tomorrow.“

From fourth position, local hero Manuel Valier (Mach1 Motorsport) achieved an excellent start into the first race of the year. He took the lead quickly and won with an advance of more than three seconds. „We chose new tires and had a slight advantage due to this“, Valier explained at the finish line. Pole-setter Jehan Daruvala wasn't able to tie in with his heats-performances and fell back to fourth place during the course of the race. Hannes Janker was Valier’s closest pursuer in the end: He stood his ground against Martijn van Leeuwen during a thrilling fight and therefore achieved a German double success. Behind van Leeuwen and Daruvala, Egor Stupenkov, Will Stowel (Piers Sexton Racing), Anton Dulin (Kartprom Team), Marco Paul (Energy Germany), Kevin Metzner (PM Racing Performance) and Alexander Müller (TK Racing) completed the top ten.

There was no stopping Manuel Valier during the second race at first again. Due to a perfect first lap, he achieved a considerable advance and held this for 22 laps. But then the sudden end: Valier's left back wheel had come loose and the Bavarian had to forfeit the race. „This is a hard setback. No one would have been able to take my lead. We’ll have to analyse the problem now. The nuts just loosened and I lost the rim.“ Jehan Daruvala inherited his victory - the Indian was in a quarrel with Egor Stupenkov, Hannes Janker and Martijn van Leeuwen at the beginning of the race. Janker and van Leeuwen collided at the end of the start-finish-line and drove off track. While Janker had to end the race completely, van Leeuwen continued his race and managed to come in 13th in the end. Kevin Metzner and Fabienne Wohlwend (TB Motorsport Racing Team) profited from their bad luck. They came in third and fourth behind Daruvala and Stupenkov. Junior climber Nicolai Kjaergaard (TK Racing) jumped into the top five as well. Behind the Dane followed Tomas Stranaya (KSB Racing Team), Aljoscha Prothmann (RS Motorsport), Mark Potmann (Daems Racing Team), Maxim Martynyuk (Energy Germany) and Harrison Newey (Mach1 Motorsport).

Series coordinator Stefan Wagner had every reason to rejoice after this successful DKM kick-off: „We have witnessed a great first event of the season. The MSC Waldkraiburg has done a great job again. Our new race-control passed its practical test as well and provides great images. The great sport on the track has to be mentioned too. The three fields are strongly manned and the feedback from the teams was very positive throughout. We will continue working on the development of the DKM and are looking forward to the next race in Wackersdorf.“

The German Kart Championship will travel to the Prokart Raceland at the end of June (28th-29th). Three weeks before the KZ and KZ2 European Championship we can look forward to filled-up fields of participants once again.