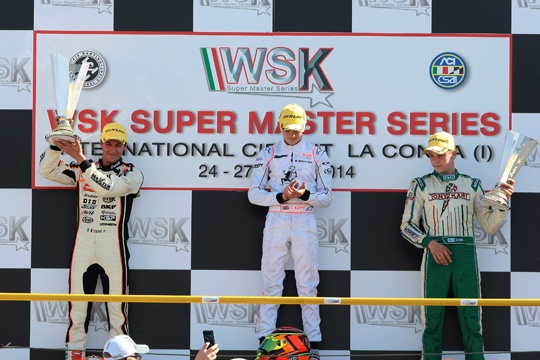 Press Release by: CRG Racing Team
Positive closure of WSK Super Master Series for CRG, as Felice Tiene gained a very good second place in KF, Davide Forè a third in KZ2 and Muizzuddin another third place in 60 Mini, that awarded the very young driver of team Gamoto with the second place in the championship. Mauricio Baiz fourth in KF Junior.
The stop in Muro Leccese at La Conca for the third and last round of the WSK Super Master Series turned out to be a particularly interesting round for CRG's colors. A constant presence on the podium highlighted the drivers performance, starting from Felice Tiene who secured a great second place in KF that allows to be hopeful ahead of the forthcoming international CIK-FIA races.

EXCELLENT SECOND PLACE FOR FELICE TIENE IN KF
Felice Tiene has been a brilliant interpreter of the final racing day at La Conca, as he produced a flawless KF weekend on his CRG kart powered TM by GFR. He ended his efforts with a good second place behind Ilott Callum on Zanardi. Tiene slided in top positions since qualifying and came out of heats in fourth place, result followed by the fifth in his Prefinal. He then improved the chassis and engine setup ahead of the Final, where he put in a stunning comeback race that saw Tiene ending in an excellent second position. He gained this place very early on, taking easily all his direct rivals, exception made for Ilott.

Very good sixth position for the Spaniard Pedro Hiltbrand, who confirms to be among the best of this category in this race too. Some problems affected the Romanian driver Dionisios Marcu instead –  who suffered an inconvenience to a tire –  but in the Final he put in a comeback from the back of the grid to P20.

The Venezuelan driver Sidney Gomez was unfortunately involved in an incident at the start of his Prefinal and therefore could not gain access to the Final.

FORE’ ON THE PODIUM IN KZ2
CRG's flag has been waved by Davide Forè, who has been racing in KZ2 with team DTK. As hoped for, the Italian driver promptly recovered from the two previous races in WSK Super Master and came back among the best of his category, securing a podium finish with a truly deserved third place that can be seen as a good premise to the international CIK-FIA season. Forè was sixth in the Prefinal and in the Final he quickly gained several positions and installed himself in third place behind Ardigò and Thonon, keeping it all the way until the flag. Forè will be heading to Dallas, United States, for an extra race with CRG USA in the first round of the “triptyque” of the “Pro Tour” series scheduled for next 4 May.

BAIZ FOURTH IN KFJ'S CLASSIFICATION
Not much of luck for CRG in KF Junior. The former classification leader, the Venezuelan Mauricio Baiz, was at the debut with CRG's works team and did struggle a bit to find the right setup, but managed to recover in the Prefinal and Final from an unlucky incident he was involved in one heat. He gained P17 but was penalized in the final race due to an wrong maneuver. Baiz ended fourth in the championship, behind Ahmed (winner of the Final), Ticktum and Leonardo Lorandi.

The Spanish driver of CRG Eliseo Martinez also experienced some difficulties. In the Final he had to contempt himself with P18 after being 10th in the Prefinal and in a promising 16th after the heats.

The young Briton Archie Tillett failed to gain access to the Final due to the retirement at the first lap of his Prefinal, but he displayed a good competitiveness throughout the weekend on his CRG chassis pushed by TM engine by Galiffa Team.

MUIZZUDDIN SECOND IN THE 60 MINI'S CHARTS
CRG's colors have also been protagonists in 60 Mini where team Gamoto and the Malaysian driver Muizzuddin Abdul Gafar tried to get the title until the end, following the good results harvested in the previous race of Castelletto. In La Conca, Muizzuddin, on CRG/Hero powered by LKE, fought for top positions but at the end he crossed the Final's line in third behind Abrusci and Fusco. This result was worth a splendid second place in the championship though.

Felice Tiene (KF): “I put in quite a nice recovery in the Final, which was worth the second place. I had a crescendo of results but I still missed some speed to fight for the victory. In the next days we will have to work to fill that small gap that did not allow me to aim to the victory. This is our objective, but I come home from La Conca quite hopeful ahead of the forthcoming round of the European CIK-FIA Championship that will take place on this very same track next 11 May.”

Davide Forè (KZ2): “I am happy on my third place. I still missed a bit of speed to catch the first two but I am happy as I improved the performance of the first two races. We did a crucial step forward to aim to the victory. It has been a tough work but we have done it. We will shortly start to focus on the European championship but for now I just want to enjoy this podium. I'd like to thank my mechanic, TM and the whole team for this good result.”