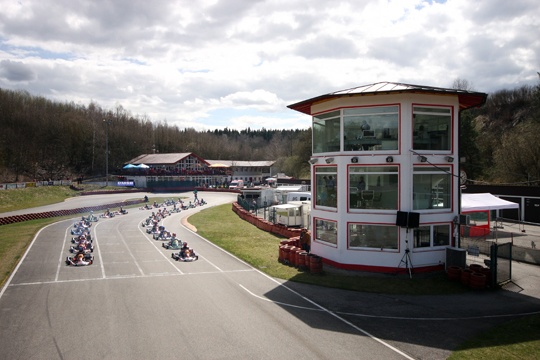 Press Release by: DKM
The German Kart Championship’s new season is going to start in Bavarian Ampfing next weekend (May 2nd – 4th), which promises lots of action.

The fields of the three grade series DKM, DJKM and DSKM are well filled: all in all, 145 drivers from 24 nations are going to participate. After a long winter break, the drivers can hardly wait for the German Kart Championship to start. During the past weeks, the lists of participants have been filling rapidly and the DMSB can rejoice about an ongoing interest in the highest German kart racing series. At the season kick-off, which marks the first of five events, 145 drivers from 24 nations are going to start. In addition to numerous drivers from Europe, the DKM is also welcoming participants from Japan, India, China and the USA.

Because of the constant advancements, the DKM has developed into one of the biggest international racing series across Europe. Including race-control, an experienced organizational team, international news coverage and an extensive video-live-stream, the Championship is providing the drivers with an ideal platform. Some innovations are waiting in the 2014 season as well. A completely new race-control is going to have its premiere in Ampfing: Up to eight full-HD cameras are going to capture the events on the track and are going to grant the race officials an even better insight than before. The popular video-live-stream is going to be extended as well. Due to new partners, the fans who’re watching at home can look forward to even more coverage. All in all, more than 13 hours of live images are going to be broadcasted.

But these facts alone are not enough to create exciting kart racing. To do this, the best drivers of the world have registered once again. While the KF-class is slowly dying out in other European countries, the DKM is counting 38 participants. The fight for the title is being awaited with high anticipation. Next to reigning Champion André Matisic (KKC Racing Team), Vice Champion Hannes Janker (TB Motorsport Racing Team) and Junior Champion Martijn van Leeuwen (Keijzer Racing) are also going to start in this class. The latter has shown a strong performance lately and is now aiming for a title at the seniors as well: “My goal is winning the Championship. I was among the top groups at the previous races in Italy and of course I want to continue this trend in Ampfing.” Ricky Flynn Motorsport is planning to have a say in the fight for the title as well – the British team is starting at the DKM for the first time with their drivers Jehan Daruvala from India and Dane Peter Ravn Bollingtoft.

Due to Martijn van Leeuwen’s rise to the DKM, the Dutchman is making room for a new Champion at the juniors. 41 young drivers are being awaited in Ampfing, among them numerous top talents. The best chances among the German drivers can be accounted to David Beckmann (Morsicani Racing s.r.l.), Jannes Fittje (PM-Racing Performance), Lirim Zendeli (KSM Motorsport), Mick Junior (KSM Motorsport) and rookie Max Hesse (Solgat Motorsport). All five of them have already driven international races this year and were able to hold their grounds against their competition. After achieving the vice title last year, there is only one goal for David Beckmann this season: “Of course I want to win the Championship and I‘m going to try repeating the success I had in Ampfing in 2013.


Max Hesse is breaking new ground, because 2014 is going to be his first international season: “Both of my races in Italy have been very insightful. We’ve been working on our material since then and are starting into this season very confidently.” The races aren’t going to be easy though. Just like at the DKM, Ricky Flynn Motorsport is going to place four drivers at the juniors as well. British Enaam Ahmed secured the overall victory at the Lonato Winter Cup at the beginning of the year as well as Championship titles at the WSK Champions Cup and the WSK Super Masters Series.

Counting 68 drivers, the DSKM is causing quite a stir before the races have even begun. The field of participants has never been so filled-up and is going to belong to the public’s favorites in Ampfing once again. The battle between Jorrit Pex (CRG Holland) and Rick Dreezen (CRG Holland) is going to be interesting. Dreezen won the shifterkart Championship from 2007-2009 and therefore has got just as many titles as Jorrit Pex, who won the last three years. Both of them could make history this year and be the first driver to ever win the Championship four times. Pex stayed realistic during an interview earlier this year though: “I always compete to win. But a season like this is long and lots of things can happen. We’ll have to wait and see how the races are going to go.” Lots of competitors are going to want to have a say in the battle for the title too though. Especially Paolo de Conto (AVG Racing): The Italian has started at the German Championship numerous times, but has never been able to achieve the big success, despite becoming Vice Champion last year. After a year-long break, Michele di Martino (Energy Germany) is going to get back in the game and start at the DSKM for Germany. The Rhinelander is going to start in a kart again as well as making appearances at the VLN Endurance Championship.

The 1.060m long Schweppermannring, located 50 kilometers south of Munich, is among the favorite tracks of the drivers. It provides a unique setting and atmosphere for them as well as for the audience due to its stadium-like design. The broad start-finish-straight allows chances of overtaking others and has made for narrow racing decisions in the past.

The new season’s kick-off is going to be on Friday (May 2nd) already, in the form of free trainings. Things are going to get serious on Saturday morning (May 3rd) when it’s time for qualifying, followed by 15 heats, which will lead to the starting positions for the final races on Sunday (May 4th). All fans are going to be able to follow the events in Ampfing at home on Saturday and Sunday from 8a.m. via video-live-stream. Additionally, there will be lots of information on the official facebook fanpage.