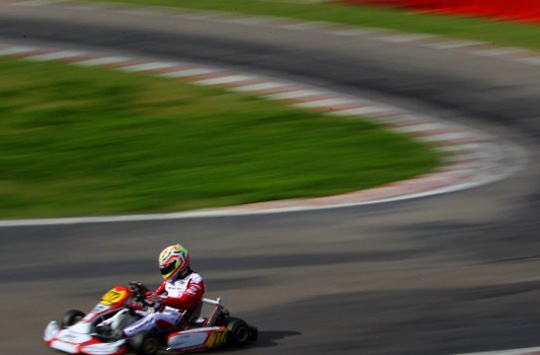 Press Release by: Art Grand Prix
After starting the season in KZ2, the 2013 KF vice World Champion Ben Hanley returned to the direct drive category for the last round of the WSK Super Master Series and proved extremely hard to beat, as Italy’s Mirko Torsellini took over the leading role in KZ2 putting up a top performance.

With the fight for the KZ2 title virtually out of reach, ART Grand Prix decided to route experienced Brit Ben Hanley to the senior direct drive category, leaving Mirko Torsellini to play the leading role in the gearbox category. And the fast Italian did not disappoint! After stopping the 8th fastest lap in qualifying, Torsellini went on to display an impressive pace in the heats. Sixth place in the first heat and the fastest lap of the race (46”254) were only the prologue of what was going to come next. Steadily moving through the field, the young Italian closed the second heat in 3rd, and the last one with a win after a nail-biting 10-laps fight with fellow countryman Ardigò. With three laps to go, Mirko dived on the inside for the lead and never looked back, also stopping the second fastest lap in the process.

The prefinal started slightly uphill, with Torsellini having to recover from a tough first lap that saw him drop a couple of positions. The Italian was back in 3rd a few laps later, and that’s where he would end with the third fastest lap of the race to his credit after hassling Ardigò for the entire race distance. Comes the final, Torsellini lost a few positions at the start, gained them back in the early stages, until he was demoted to 6th while fighting hard for a podium position. The Italian would close in 8th, later advanced to 7th following a solid performance throughout the weekend.

In KF, Ben Hanley was in a class of his own already in the first official session of the weekend. With the field divided in two groups for qualifying, the talented Brit stopped the fastest lap of his group (46”467), second fastest overall, and went on to win 3 heats and take a 4th place to start prefinal from pole. A clever race strategy allowed Hanley to fight for the top without overstressing his rubbers. Knowing 2nd place would grant him row 2 start for the final due to the two-prefinals system, the ART Grand Prix star tried his best to keep the position, but was taken with three laps to go having to settle for 3rd at the chequered flag with the third fastest lap of the race to his credit. The final, however, would be one to forget, with a lap 2 melee that saw the fast Brit out for good. Hanley’s solid performance throughout the weekend underlined the great competitiveness of the ART Grand Prix equipment, which was also evident on Okada’s top-5 result in the heats session, and ART Grand Prix Finland’s duo Moilanen-Tujula ability to go through to the final lapping very consistently.

In KFJ, the many race contacts and ensuing DNFs prevented the ART Grand Prix boys from leaving a mark in La Conca. Racing Steps Foundation driver Josh Smith was the best of the lot in qualifying and in the heats session, with 4th place the best result in the heats to his credit. However, comes the prefinal and the young British driver - from his mid grid starting position - had a disastrous first lap dropping at the back of the field, from which he would never recover. On the other hand, Paavo Tonteri, Patrick Pasma and Adam Haikal did manage to make it past the two-prefinal system into the final, while China’s Ye did not make it through the top-17 despite a superb comeback from the back of the grid.

The final would see Pasma, Tonteri and Haikal making up positions and finish with a solid performance to their credit.

Armando Filini (Team Manager) “A solid weekend for our team in La Conca, and despite not making it onto podium, especially Hanley and Torsellini showed the high competitiveness of our equipment. We now look forward to the opening round of the CIK European KF-KFJ Championship in La Conca in a couple of weeks, confident that our boys will fight for the win.”