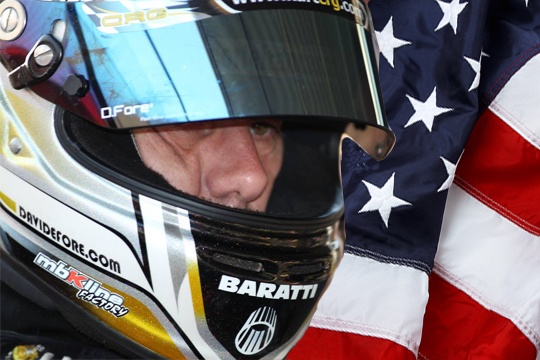 Press Release by: CRG
Five-time world karting champion Davide Forѐ has signed on to join CRG-USA for his first SKUSA SpringNationals and debut in the S1 division, powered by DDR Engines.

The CRG-USA operation is preparing for what is to be another exciting campaign with the Superkarts! USA Pro Tour series and its regional programs. The 2013 S1 Pro Stock Moto and 2012 S2 Semi-Pro Stock Moto championship team has its sights on more success in 2014. CRG-USA is coming off its best results at the Rotax Challenge of the Americas program, and is excited about the summer season closing in. A full roster of drivers are preparing for a double weekend campaign at the Dallas Karting Complex in Caddo Mills, Texas to contest the opening event of the Texas ProKart Challenge on April 25-27 with the Superkarts! USA Pro Tour SpringNationals scheduled for May 2-4.

“Our mission is to provide the best possible service at the race track, competing aboard the best product on the market,” stated CRG-USA owner Stacey Cook. “The results here in the United States, and around the world, prove the pedigree that is CRG. We have supported the Superkarts! USA Pro Tour since it began, and understand what it takes to win at this level. We hope to include more drivers into our CRG-USA family.”


The Superkarts! USA and United States Rotax Max Challenge regional program will host official practice on Friday, April 25 with two rounds of racing to be contested on Saturday and Sunday. CRG-USA, in addition to SKUSA Arrive and Drive opportunities, can provide Rotax programs or race support for those looking to gain two punches toward the United States Rotax Max Challenge Grand Nationals, set for July 17-20 at the Mille Motorsports Park in Tooele, Utah. The Monday and Tuesday following the Texas PKC event will be spent preparing for the 2014 Superkarts! USA SpringNationals. CRG-USA will conduct test sessions those two days, preparing for the May 2-4 event. Each Arrive and Drive program is available for all SKUSA categories, complete with a CRG chassis and the option of Darcy DeCoste Racing Engines powerplant for Stock Moto or TaG competition. Each program underneath the CRG-USA tent includes pit space, data service and hospitality. CRG-USA will also be providing a full inventory of parts and accessories for CRG customers.

CRG-USA will be working with over 20 drivers over the two weekends, alongside the CRG dealers and race teams that will also be in attendance in Dallas. The operation is the defending S1 Pro Stock Moto champion, with Joey Wimsett at the helm. The 2013 Pro Tour champion is back to defend his title, with a solid roster lined up with him. Former S2 Semi-Pro champion Sabré Cook, ‘Flyin Hawaiian’ Alex Gumpfer and former SuperNationals winner Ron White complete the powerful CRG-USA S1 lineup.

The Master categories at the SKUSA Pro Tour will see strong contention from CRG-USA drivers. Among them is former CRG driver Darren Elliott, making his return to competition after nearly five years. Elliott has won his first three ProKart Challenge events of the year, and will make his Pro Tour debut in the S4 Master Stock Moto division. Flanking the former nationally-rank driver is seven others capable of standing on the podium this season. Juan Garcia, Victor Jimenez, David Levy and Steve McCaffrey are racing aboard CRG karts with DDR Engines power. CRG racers JP Alonso, Roy Montgomery and Tim Ulmen will compete with support from CRG-USA. TaG Master will see three-time SuperNationals winner Billy Cleavelin and Kurt Fisher compete for victories under the CRG-USA banner.

A young crop of drivers fill out the S2 Semi-Pro roster for CRG-USA. Lindsey Brewer is set to start her second season in the S2 ranks, as is Myles Marolt and Tase Flores. Former S5 front-runner Ryan Rudolph is back with CRG-USA, preparing for his first full season in the S2 division. Ryan Lankenau rounds out the roster. Other young guns in include Evan Roshak (S5 Junior) and Estiban Jimenez (TaG Cadet).

CRG-USA is primed for an outstanding season and future, with great opportunities for drivers to be part of the growing race team or businesses looking to promote the world-championship CRG brand as part of the dealer network. Anyone interested in joining the team should contact Stacey Cook at 855.TEAMCRG or via email info@crg-usa.com. Be sure to watch for the newly designed www.crg-usa.com and ‘Like’ them on Facebook.