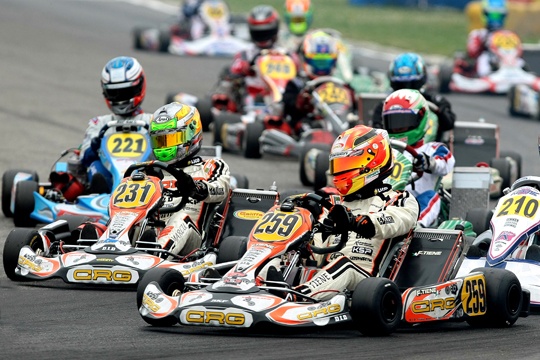 Press Release by: CRG
In the picture, Felice Tiene and Dionisios Marcu, KF (Cunaphoto.it)
In KF Felice Tiene has been quick since the beginning but a penalty in the Prefinal prevented him to hit a possible big target in the Final.  Forè ended 11th in KZ2. Martinez more and more competitive in KF Junior. CRG's colors on the top step of the podium in 60 Mini with Muizzuddin and team Gamoto.

The second round of WSK Super Master Series took place in Castelletto di Branduzzo where CRG works team fielded some of its drivers with the main objective of complete the preparation ahead of the forthcoming international commitments in the CIK-FIA Championships.

TIENE AMONG THE QUICKEST IN KF
Felice Tiene obtained a very good result in KF, on the CRG chassis pushed by a TM engine unit prepared by GFR. The CRG's driver put in a stunning comeback in the Final, that he started from P22 and ended to the sixth place under the chequered flag thanks to very quick laptimes, like the second absolute best loop completed in 48”050. This was actually the important confirmation Tiene was after: the competitiveness required to be once again among the main protagonists of the season. Should Tiene have not been handed a 5 seconds penalty due to a contact in the Prefinal –  where he was second –  he could have certainly aimed at the victory.

Some bad luck affected the young Romanian driver Dionisios Marcu in the Final as he was stopped by an engine problem, while the Venezuelan  Sidney Gomez had to retire in the Prefinal due to a puncture and to the stewards decision following an incident.

FORE’ 11TH IN KZ2
Some problems hit Davide Forè in KZ2 instead, but the driver has been always among the quickest with the Polish team DTK. Forè challenged the top drivers of the category also in Castelletto, but has been unfortunately slowed down by some inconveniences. Forè recovered from the P16 of qualifying ending the heats in eleventh place. He kept his momentum in the Prefinal and finished in eighth place, but in the Final he had to cross the line in eleventh place that did not satisfy the Italian driver despite he managed to go beyond the wall of 48 seconds.

STRONG RACE FOR MARTINEZ IN KF JUNIOR
The young Spaniard Eliseo Martinez is displaying growing confidence in his debut season in KF Junior, after the excellent results obtained last year in 60 Mini. Martinez started the Final from the third row of the grid, position secured thanks to the third place obtained in his Prefinal. At the start he has been involved in an incident, but managed anyway to put in a solid comeback race ended in 13th place.

The young Briton Archie Tillett continued his apprenticeship in the very competitive International races of WSK. In Castelletto Tillett ended 21st in the Prefinal, and just missed to gain access to the Final.

MUIZZUDDIN TO THE TRIUMPH IN 60 MINI
CRG colors gained the top step of 60 Mini's podium thanks to team Gamoto and its top driver, the Malaysian Muizzuddin Abdul Gafar, on CRG/Hero-LKE. He has been excellent since qualifying where he set the quickest time leading Serravalle and Abrusci, while at the end of the heats he was still on top thanks to two wins and a second place. Muizzuddin continued therefore with his winning performance in the Final where he won a very lively Final. The other driver of Gamoto, Bogdan Fetisov, was among the quickest too and ended tenth in the Final ahead of Ivan Grigorev of team DR. Muizzuddin is currently third in the championship behind Mizevych and Abrusci.

Felice Tiene's comment: “What a shame for the penalty I was handed in the Prefinal! Without it, I could have aimed to the victory. The engine was strong, at the beginning we just had to adjust the chassis to the right setup. This has been the first race on Dunlop tires, but we nevertheless quickly got the right setup done. I am really optimistic ahead of the remainder of the season. In two weeks time I will be competing in the third round of WSK in Muro Leccese mainly to prepare for the first round of the European KF Championship, that will take place next 11 May on the same circuit of La Conca.”

All results of WSK Super Master Series are available at  www.wsk.it