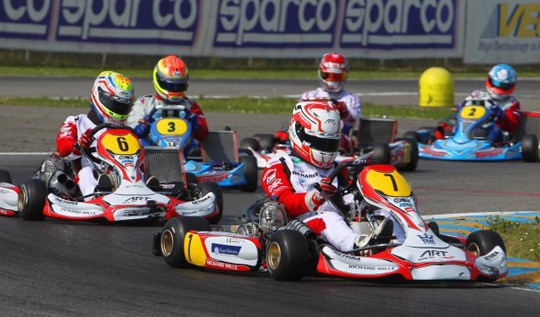 Press Release by: Art Grand Prix
Despite a dominant outing at 7 Laghi Circuit in 2013 - where the team managed by Armando Filini grabbed two wins and four podiums, hitting the fastest lap as many as four times - the track in northwest Italy runs short of points for the Reds this time around at the WSK Super Masters Series round 2.
Starting strong early in the weekend, the ART Grand Prix boys showed good pace, and despite struggling to find the ideal set-up in qualifying, most of them went through to the final stages in one of the most difficult tracks in the calendar.
Starting with KZ2, Ben Hanley took a brilliant 3rd in the first heat after stopping 14th fastest in a blistering qualifying. Also his Italian team-mate Mirko Torsellini came up strong from 12th to 7th at the chequered flag, but the enthusiasm in the ART Grand Prix camp was soon frustrated in the opening lap of the second heat, when Hanley came together with a rival dropping to the back of the field. Having to race in comeback mode, the Brit managed to save it closing just off the Top-10, with Torsellini suffering in the early stages. Heat 3 would turn out to be even more upsetting, with Hanley out right after the start. On the other hand, Torsellini reaffirmed ART Grand Prix top performance by closing in 5th – later advanced to 4th – and lapping with the fastest drivers.
More of that was to come! In fact, the prefinal would see Hanley’s revenge, with the fast Brit moving up all the way to 5th with a prodigious move also setting the fastest lap of the race (47”757). Instead Torsellini, despite getting stuck in traffic after dropping four positions in the first lap, managed to clinch P9.
The final was not for the faint-hearted, with the ART Grand Prix duo having to give everything they got to make it into the point zone.
Hanley had a trouble-free start, jumped a couple of positions in the first lap and stayed with the packed leading group past the halfway mark, when he made the move for 7th stick. A few more laps, and the crisp talent of the expert Brit would pop out with the move for 6th; but his comeback would be complete only at the last lap, when Ben clinched a thoroughly deserved 5th place, following a series of blistering laps in the 47”8.
Also Torsellini had something of his own to show, with the Italian managing to comeback just outside the Top-10 from 18th on starting grid.
In KF, the new Dunlop tyres did not benefit the ART Grand Prix drivers. Japan’s Okada, Brazil’s Sette Camara and Denmark’s Sorensen could not take advantage of the previous year set-up indication – which saw Barnicoat grab 2nd in prefinal and 3rd in the final after a dominant weekend – and struggled in finding the way forward. Best of the lot after the heats was Okada, who enjoyed a 12th place start in the prefinal. But lap 3 would see the Japanese forced to retire following an accident and unable to go through to the final. The prefinal would be somewhat smoother for Sette Camara and Sorensen, the two finishing 17th and 14th respectively, but the final would see both fighting hard in the second half of the group and closing 21st and 24th respectively at the flag, unable to leave a mark.
In KF Junior, too many race accidents had the ART Grand Prix drivers fighting for position in mid group for the entire weekend. ART Grand Prix Finland’s Tonteri proved the best of the lot in qualifying and was protagonist in the heats, with three Top-10 results to his credit. Consistent pace also for China’s Yifei Ye and Britain’s Josh Smith, excluded in the third heat due to a bad manoeuvre. The prefinal saw only Ye managing to go through to the final, as the rest of the ART Grand Prix boys found themselves stuck in the traffic fighting for position, including Tonteri, despite his top-10 starting grid position. A tough weekend for all, even for Ye, who was forced out after only three laps.
Armando Filini (Team Manager)
“This certainly wasn’t the best track for the most inexperienced drivers of our team. Castelletto is always a hard nut to crack, it requires a lot of experience, as it’s very difficult to overtake on this very technical track. Also Hanley had to race his socks off to bring home a very good 5th position. It’s a shame we had a technical problem in qualifying, because after that we had to start from mid group where the race can get very complicated.
Anyways this also helps our drivers improving, and we look at our next race in La Conca with more confidence. We will have new equipment and more data, which will help us to aim at the top of the standings.”
ART Grand Prix next race
27/04 – WSK Super Masters Series Rnd.3, La Conca (ITA)