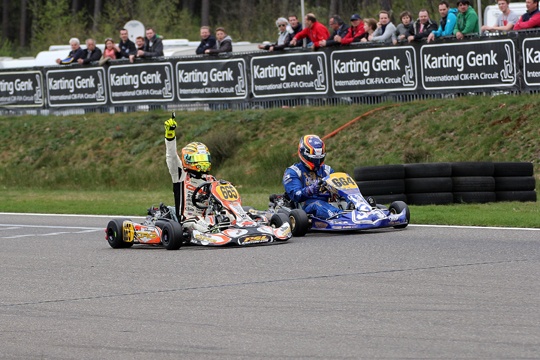 Press Release by: CRG
In the picture, Lennox (Ph. Timo Deck)
Lennox secured an exceptional win in Genk's debut in the Rotax Max Euro Challenge DD2. Very good performance also by the American Daniel Formal. In  Senior, De Brabander recovered up to P6 in the debut with CRG. Bad luck for Eliseo Martinez and Jose Enrique Brito in Junior.

CRG works team put in a bold performance at the circuit of Genk (Belgium) in the first round of the Rotax Max Euro Challenge, that climaxed with the victory scored by Jordon Lennox-Lamb in DD2, the category with the shift. This convincing result by CRG and Lennox highlighted the quality of the Dark Rider Evo chassis in a weekend ended with the exciting and victorious sprint to the line.

CRG AND LENNOX TO THE TRIUMPH IN DD2
Jordon Lennox-Lamb triumphed in DD2 despite having to put in a comeback Final due to an incident he was involved in the Prefinal, when leading the race. An overwhelming recoup put the Briton back in the challenge for the victory as he engaged a duel with Thonon. Lennox eventually managed to take the win in the sprint to the line that awarded all the efforts of the team. Lennox also set the fastest lap of the race.

Good performance in DD2 also for the American Daniel Formal, who was at the first experience in the Euro Challenge with CRG works team. He took a very good sixth place, while the German Luka Kamali made it to the Final, but eventually ended to in 20th place.

The final classification of DD2 confirmed the competitiveness of CRG's chassis as also witnessed by the fourth place obtained by the Dutch driver Bryan Eerden in force at team PSL Karting and by the eighth place of the British Joshua Collings of team MSport Karting.

DE BRABANDER TO THE FORE IN THE SENIOR
The Belgian champion Yannick De Brabander displayed a good level of competitiveness in the season debut with CRG in Rotax Senior. He completed his efforts for the weekend securing the sixth place in the Final after recovering all the way from the 19th place of the Prefinal and the 26th of the heats.  Solid weekend also for the Polish driver Lukasz Bartoszuk, who had a crescendo of results up to the 13th place of the Final, while the Romanian Dionisios Marcu has been a bit unlucky as some incidents relegated him to the 24th final position. Remarkably, Bartoszuk set the fastest lap of the race in the Final.

UNLUCKY MARTINEZ AND BRITO IN JUNIOR
Eliseo Martinez and Jose Enrique Brito have had an unlucky weekend as they have been both involved in incidents that prevented them from gaining access to the Final. Martinez had a partial satisfaction of setting the fastest lap of the race in the repechage race after the heats though, which highlighted once more his competitiveness.

SUNDAY QUOTES
Euan Jeffery, team manager CRG: “The first round of the Rotax Euro Challenge in Genk has definitely been positive for CRG. Jordon's Final in DD2 has been stunning and Daniel Formal had a good debut in Euro Challenge. Four CRG chassis made it to the top eight in DD2: a good result highlighting the value of our product. De Brabander in Senior had a solid weekend, as Bartoszuk and Marcu despite some incidents that relegated them to a start from the back. Similarly, Martinez and Brito have been penalized by some incidents in the Junior, but we are very happy on the performance of all our drivers.”

Jordon Lennox-Lamb: “It has been a great Final! A great spectacle for everyone. CRG proved once again all its quality also in Rotax, with the icing on the cake of the fastest lap of the race. A big thank you goes to CRG for allowing me to run this race!”

Daniel Formal: “I am happy with the sixth place on my first European race of the year. I could have actually obtained a better result, but I am happy anyway. I would like to congratulate my team mate Jordon on his fantastic race and victory. Finally, I'd like to thank my mechanic, CRG and PSL Karting.”

NEXT ROUND
01.05.14 The second round of the Rotax Euro Challenge will take place in Castelletto di Branduzzo (Pavia, Italy).

All results of the weekend are available at  www.rotaxmaxeurochallenge.com