After the second heat raced in the morning, the CIK-FIA World Championship has been suspended as a result of serious damage to the track surface. The CIK-FIA released a document stating that Saturday’s racing is over, and the four remaining heats will be held on Sunday, hoping that by then the most seriously damaged parts of the circuits will be fixed. 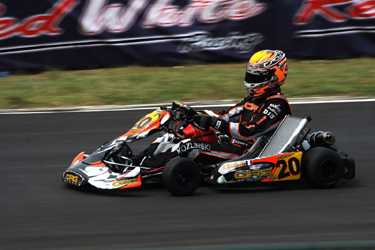 practice went to British Ben Hanley on Maranello taking the pole with 45”946, a tenth faster than Italian Alessandro, followed by Catt, Maisano and Vainio. Hanley also took the first heat ahead of his Finnish teammate Aaro Vainio, while the second heat saw French Crg driver Arnaud Kozlinski (10th in qualifying) taking the chequered flag first just ahead of Oliver Rowland.
Shortly after, stewards decided for the suspension.

Many drivers said extremely disappointed through their Facebook profile, and uncertainty on the effectiveness of the track works is shared by most