Author: Vroomkart International
Little by little the tension is mounting on the Macau Circuit, where this weekend the World Championship of Karting will take place. For the last two days, drivers have been familiarising themselves with the track ahead of the really serious business this Saturday morning when qualifying practice begins. 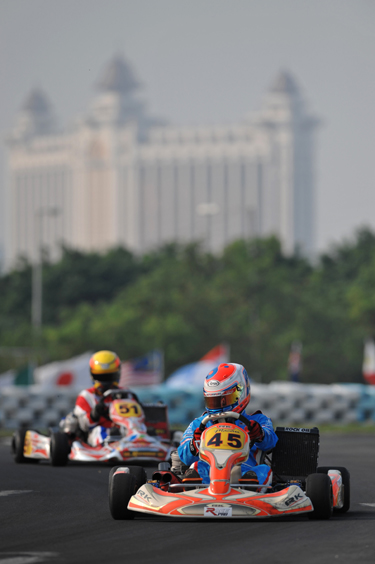 For the world’s best kart racers who have the advantage of regular experience racing in Europe, the excursion to Macau is a long way from home. The imposing structures which the factories deploy close to their home bases are not reproduced in the paddock here in this Special Administrative Region of the Republic of China. Here each of them manages with a tent, open to the elements and close up to their neighbours. What cannot be denied however is the special atmosphere and convivial ambience created between the different competitors.

But that’s not all ! From its geographical location, Macau also offers a peculiar climate. For three days, there has been heavy rain in the early hours of the morning … before the sun comes out to dry the track. Then the drivers must get used to the hot and humid climate. These are conditions with which few of the drivers are at all familiar. Consequently physical fitness will also play its part in this World Championship.

Double World Champion, Marco Ardigo has the advantage of having already taken part in a race here last year – the Asia Pacific Championship. « I know the track and the people here, and so I’m not too displeased. » smiled the Italian. « Then again a World Championship is a Championship for the whole World. The goal is to win the Final ! That said, it’s a wise choice to come to Macau. There is a veritable culture of motorsport here for example the Formula 3 Grand Prix and the final round of the WTCC. A motorsport World Championship fits in here. What worries me a lot more is the weather. For the last 3 days it has rained during the morning. That does not augur well for qualifying practice tomorrow morning which may well take place on a humid track. And, by all accounts, all of the weather forecasts suggest heavy rain on Sunday… So, the weather will play a part, that’s for sure ! »

At the heart of this last day of non-qualifying practice, Marco Ardigo (Tony Kart-Vortex) has in any case reminded everybody that they will have to take him into account in mounting any challenge since he was the fastest ahead of his team mate Flavio Camponeschi (Tony Kart-Vortex), the European Champion from Finland Aaro Vainio (Maranello-Maxter), the Belgian Yannick de Brabander (Intrepid-TM) and the Czech driver Zdenek Groman (Maranello-Maxter). But eveybody in the paddock knows that these results are only indicative…

Amongst the 42 participants in this first World Championship staged in Asia, there are several Asian drivers who are taking part for the first time in an event of such importance. In addition to 2 Thai drivers, a Japanese, an Indonesian, a Phillipino, 2 drivers from Hong Kong and 2 Chinese, the driver from Macau, Joao Afonso therefore carries the hopes of the local hero, even though he realises that his chances are limited. « This is by far the most powereful kart I have ever raced » he explained. « This is fantastic and very exciting but at the same time, I realise that this is the highest level of competition in which I have ever taken part ».

Tomorrow, qualifying practice will be followed by the various qualifying races, which will determine the 34 finalists and their starting positions on the grid for the pre-final which will be raced on Sunday. At the end of that, we will know the starting positions for the final, the only race that really counts this weekend. But by then there will have been lots of ups and downs in the action on the Macau circuit!