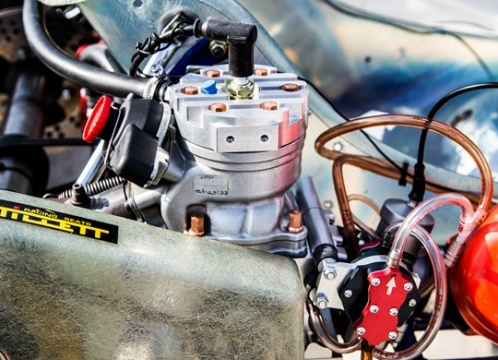 Author: Vroomkart International
On 1 April 2014, the CIK-FIA organized the second test session for the new engines that will have to be used in 2016.
Report & photos D. Pastanella


After the first test held last September, IAME, VORTEX, TM and HHC gathered again at South Garda Karting track in Lonato, Italy, to continue the development work of the new direct-drive engines, whose aim will be to simplify the existing concept thus offering a less problematic and more attractive approach to the class for younger drivers.
The engines tested are based on the KF concept with few significant alterations: no centrifugal clutch, electric starter and battery, replaced by a decompression valve on the cylinder head that allows the engine to push start without having to lift the rear wheels - unlike the "old" 100cc .
Some manufacturers went for an engine still equipped of countershaft and integrated water pump, while others like HHC made a brand new engine from solid without countershaft, with external water pump, working on ease of assembly and use. Also, speed limiters were tested, with revs ranging from 15,000 to 16,500 rpm.
The goal set by the CIK-FIA is to carry out three tests in 2014, then draft the guidelines by the end of the year. Manufacturers will have to follow such guidelines for the development of the engines in 2015 in time to start with definitive engines at the beginning of 2016.
Read the full article with comments to the test in the next issue of Vroom International ... stay tuned
Above: the new HHC, to note the decompression valve on the cylinder head (in blue)