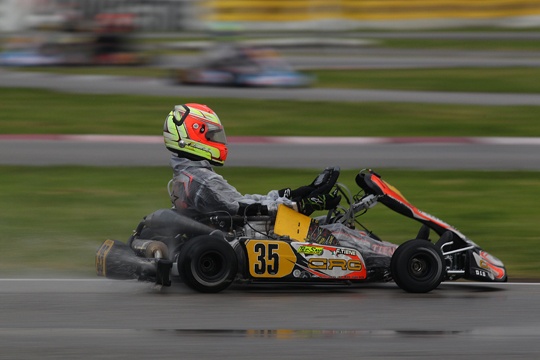 Press Release by: CRG
KZ2_Felice Tiene
CRG works team got some positive indications from the WSK Super Master opener. Tiene and Federer have been among the best in the KZ2 Prefinal. Lennox has been stopped by a technical problem, Forè alike. Dionisios and Gomez to the fore in KF. Martinez kept growing in KFJ. Team Gamoto close to the podium in 60 Mini.

Despite the International Circuit Napoli of Sarno did not award concrete results in the first round of the WSK Super Master Series, CRG drivers have put in strong performances throughout, obtaining positive indications that will certainly be useful for the coming international CIK-FIA rounds.

The round of Sarno has been particularly useful to CRG for testing chassis, setups, tires and engines ahead of the forthcoming CIK-FIA appointments, like the KZ World Championship that will take place on the very same Italian circuit later on in the year. The changing weather conditions experienced during the weekend as sun alternated to heavy or light rain spoiled a bit the final outcome of the race.

COMPETITIVENESS CONFIRMED IN KZ2
CRG's team confirmed all its competitiveness in KZ2 even though the final result did not come due mainly to a series of unlucky episodes. The soaked with rain tarmac of the Final saw Felice Tiene (CRG-Maxter) ending in 18th place, after he came out of qualifying heats strong with high expectations; Fabian Federer (CRG-Maxter) was forced to the retirement instead despite being very quick in Prefinal, where he crossed the finish line in an excellent fourth place. Jordon Lennox-Lamb (CRG-Maxter) could not make it to the Final due to a trivial technical problem stopping his chances in the Prefinal where he has been one of the most combative drivers on track. Andrea Dalè (CRG-Maxter) ended in P20 with his private team, after setting the third absolute time in qualifying and winning one heat. Davide Forè (CRG-TM) and team DTK had to retire in the Prefinal due to a tire failure, Giovanni Martinez (CRG-Maxter) had similar fate due to an incident. The victory in the Final went to Lammers (FK) from Ardigò (Tony Kart) and Kozlinski (Intrepid).

POSITIVE RACES FOR DIONISIOS AND GOMEZ IN KF
A crescendo of results characterized the weekend Dionisios Marcu (CRG-TM) in KF all the way to the Prefinal, exception made for a heat where he has been involved in an unlucky incident right after the chequered flag. The disappointment for Dionisios came in the Prefinal though, where a problem to the carburetor stripped him from a sure access to the Final. Credit where credit's due for the new-entry Sidney Gomez (CRG-TM) who closed the Prefinal with a great P8, but was later on very unlucky in the Final, where he had to start from the back of the grid due to an electric problem. The Venezuelan driver had finally to give up halfway through. The Final was won by Basz (Tony Kart) from Ilott (Zanardi) to Mazepin (Tony Kart).

MARTINEZ PROTAGONIST IN KF JUNIOR
Eliseo Martinez (CRG-TM) had very good chances in KF Junior, as he is getting more and more at ease in his debut season in the higher category after the success obtained last year in 60 Mini with team Gamoto. The CRG's Spanish driver managed to get a front row start in Prefinal, but he had to concede several positions on the wet tarmac of the Final and eventually had to retire in what turned out to be a very unlucky race to him. The victory went to Ticktum (Zanardi) from Lorandi (Tony Kart) to Ahmed (FA Kart).

TEAM GAMOTO CLOSE TO THE PODIUM IN 60 MINI
Team Gamoto and its drivers have been among the main interpreters of 60 Mini, but the Final result went missing also in this category for CRG, despite the good results scored in qualifying heats with Ivan Grigorev, Abdul Gafar Muizzuddin and Dennis Hauger. Team Gamoto's drivers had to pay the toll in the heat of Prefinals and only Hauger managed to show his value in the Final where he secured the fourth place behind Szyszko (Tony kart), Vidales (FA Kart) and Skeed (Top Kart).

All results of the WSK Super Master are available at  www.wsk.it