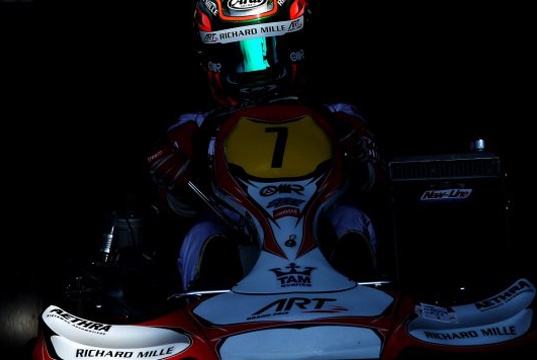 Press Release by: Art Grand Prix
A two-sided weekend for ART Grand Prix at the WSK Super Masters Series opener in Sarno, Italy. Despite proving very competitive in all categories up until the prefinal, the team managed by Armando Filini leaves the circuit in south of Italy with few points in the championship, but a huge confidence for the remaining two rounds.

Starting with the top class, Ben Hanley made a great showing in KZ2 heat session by taking 3rd in all three heats after stopping the 10th fastest laptime in qualifying. Strong performance also by Italy’s Mirko Torsellini, who took 7th twice and an 8th position in the heats. With the two prefinals-system, the Briton started 3rd on the grid, exactly where he finished at the chequered flag after dropping few positions in the early stages, while Torsellini closed in 6th. The wet final stages did not prove favourable to the ART Grand Prix bunch, particularly for Hanley, who dropped from 6th on the grid down to 26th in the first lap, having to race his socks off to make it into the points. In the meantime Torsellini moved up from 12th to 10th in few laps, with the Brit making it into the top-15 by lap 5. With the Italian settling in 9th place, Hanley made it to the top-10 with 5 to go, down almost 7” on his teammate. The Brit would manage to cut the gap down to 3 tenths, ending what started off as a promising weekend in frustration. Worth mentioning satellite team driver Luca Tilloca’s effort, who started the prefinal from 6th and was forced to retire after a contact in the early stages.

In KF, Japan’s Takuya Okada was the fastest of the lot in qualifying, but it was ART Grand Prix Finland’s Tuomas Tujula to impress in the prefinal, coming back up from 19th all the way to 4th. His outstanding prefinal did not bode well for the final, where the Finn was forced to retire after a contact dropped him down the field at the start, similarly to Brazilian Sette Camara who started from the back despite a consistent heat session. A very combative performance also by Okada and his new ART Grand Prix Factory teammate Christian Sorensen from Denmark set the ground for a season in crescendo.

The Junior category saw as many as 6 ART Grand Prix chassis on starting grid, with the Factory team driver from China Yifei Ye stopping the 13th fastest time overall (01’08”494) and hitting two top-10 results in the heats. A fantastic showing in the heats also by ART Grand Prix Finland’s Patrick Pasma (8th, 6th, 10th, 7th) and Paavo Tonteri proved the high performance of the ART Grand Prix chassis also in KFJ. A few too many contacts saw only 3 ART Grand Prix drivers making it through the two prefinals system – Pasma, Josh Smith and Ye - with the up and coming Brit protagonist of a strong comeback from 23rd to 12th, and Ye from 19th to 13th. With the ART Grand Prix trio all grouped up in the second half of the field, the one having the better on the wet track was Pasma, managing to come back up from 29th to 15th lapping similarly to the top-5. A true injection of confidence for the ART Grand Prix boys, who will have two more rounds to improve in the championship rankings.

”As usual, rain complicates things particularly to the more inexperienced drivers of our team. However, the competitiveness of our equipment is always very strong, and the very consistent results in the heats are there to show it. Unfortunately Hanley had to recover from the back after a contact in the first lap of the final, otherwise he could have gone for podium, and other drivers showed increasing signs of maturity in both KF and KFJ, proving that the hard work of all members of our team is starting to pay off. We are optimistic for the remaining two rounds of the series and for the forthcoming CIK season.”        ART Grand Prix next race