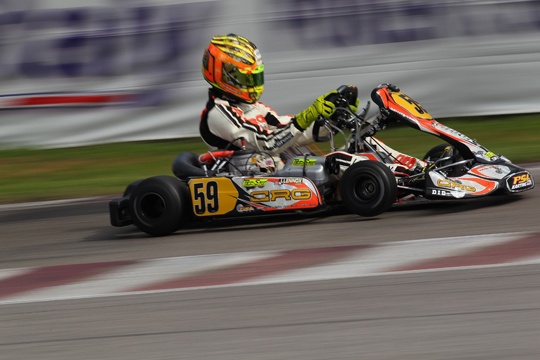 Press Release by: CRG
In KZ2 Tiene high up in the standings after the heats, alike Lennox that was stopped by an incident though. Solid performance for Dalè until the retirement in the last heat. Good debut for Gomez in KF. Dionisios involved in an incident. Martinez among the best in KF Junior. Team Gamoto protagonist in 60 Mini.

Exciting spectacle at the International Circuit Napoli of Sarno where the first round of WSK Super Master is under way. After qualifying held on Friday, Saturday's heats gave a clearer picture of the situation and CRG's works team collected some positive indications.

TIENE AMONG THE BEST OF KZ2

In KZ2 Jordon Lennox-Lamb and Felice Tiene, both onCRG-Maxter, have often been among the top players always putting in very good performances. Unfortunately though, Lennox had been put out by an incident in the last heat and his classification had been messed up a bit as he now stands 20th in the classification after completing two good comeback races in the other heats, where he secured a third and fifth place. Tiene obtained the absolute eighth place thanks to two sixth places and a fourth place. Some problems slowed down Fabian Federer (19th) on CRG-Maxter and  Davide Forè (15th) on CRG-TM run by team DTK.

Very unlucky day for Andrea Dalè (CRG-TM), who had been under the spotlight with his private team since qualifying, where he set the third quickest place, a performance that was confirmed with the victory of one heat. The Italian driver was then forced to give up in the third and last heat. A series of incidents slowed down also Giovanni Martinez (CRG-Maxter).

GOMEZ PUTTING IN A VERY GOOD DEBUT IN KF

The Venezuelan driver Sidney Gomez (CRG-TM) had a very positive debut in KF even if the classification did not award him the way he deserved. He is currently 25th but ended the other heats with a good fourth and eighth place. Dionisios Marcu (CRG-TM) is a little bit more to the back in P28 due to a technical problem at the start of the third heat. He run a fierce race nevertheless, as he kept racing despite the consequences of an incident at the end of the second heat.

In KF Junior Eliseo Martinez (CRG-TM) produced a good performance and is currently sixth absolute after two third places and a sixth in the three heats. Two more heats on Sunday morning will delineate the starting grid before the Prefinals and Finals.

TEAM GAMOTO TO THE FORE IN 60 MINI

Team Gamoto has been under the spotlight in 60 Mini mainly with the recent winner of the WSK Champions Cup, Muizzuddin Abdul Gafar (CRG/Hero-LKE), who is currently sixth absolute at the end of the heats.