Author: Vroomkart International
Three is the perfect number, and CRG ace Jonathan Thonon hit perfection in Sarno, grabbing his third title in KZ1. We investigate the reason of his success, which is partly due to a super Maxter engine tuned by Patrick Savard. Besides all the latest racing events – World Cup for KF2, AKOC, Rotax and Easy European Championships – October issue features a fantastic Track Test comparing direct drive “entry level” karts: 100 Cadet, 100 Junior and KF3. We tell you which one is the most instructive for a young driver looking to success... plus Giuliano Niceta's fantastic poster! 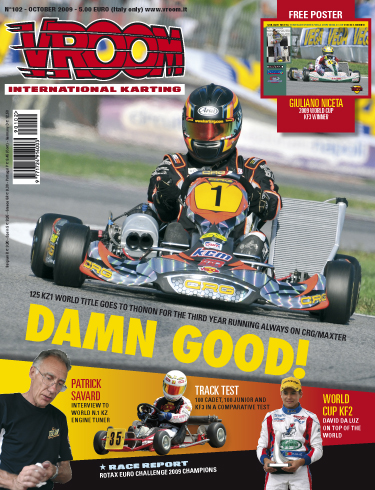 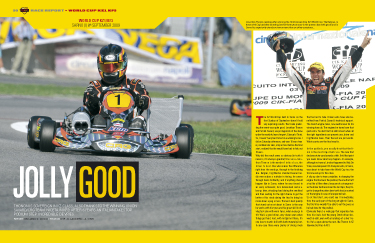 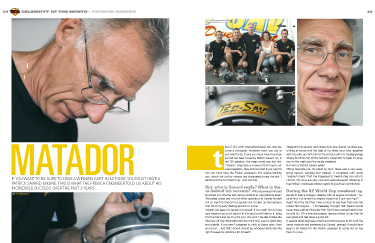 CELEBRITY OF THE MONTH - Patrick Savard   If you want to be sure to have a winning kart in KZ today, you must have a Patrick Savard engine. This is what the French engineer told us about his incredible success over the past 3 years… 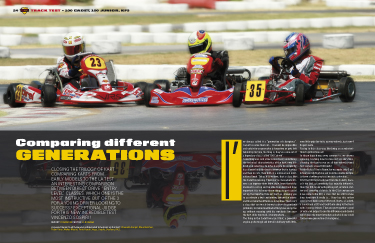 TRACK TEST - 100 Cadet, 100 Junior, KF3   Closing the trilogy of kart comparing karts from early models to the la test an interesting comparison between direct drive “entry level” classes. Which one is the most instructive out of the 3 for a young driver looking to success? Exceptional Judge for this new incredible test Vincenzo Sospiri! 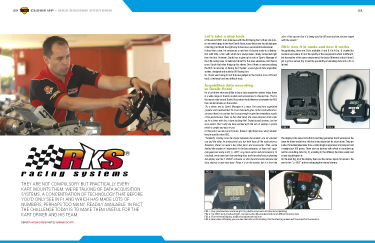 CLOSE UP - RKS Racing Systems   They are not compulsory but practically every kart mounts them: we’re talking of data acquisition systems, a concentration of technology that before you’d only see in F1 and which has made lots of numbers, perhaps too many, readily available. In fact, the challenge today is to make them useful for the kart driver and his team. 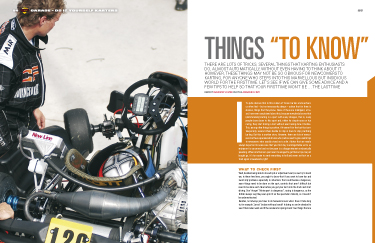 GARAGE - Do it yourself karters   There are lots of tricks, several things that karting enthusiasts do, almost automatically, without even having to think about it. However, these things may not be so obvious for newcomers to karting, for anyone who steps into this marvellous but insidious world for the first time. Let’s see if we can give some advice and a few tips to help so that your first time won’t be … the last time 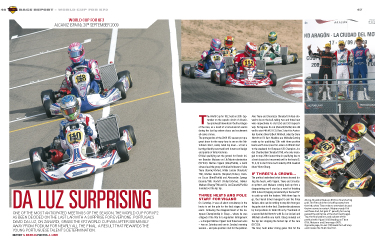 RACE REPORT - World Cup for KF2   One of the most anticipated meetings of the season, the World Cup for KF2 as been decided on the last lap, with a surprise for everyone. Portugal’s David Da Luz, on Zanardi, grabs the KF2 World Cup win after seemingly away from podium for nearly all the final. A result that rewards the young Portuguese talent’s determination. 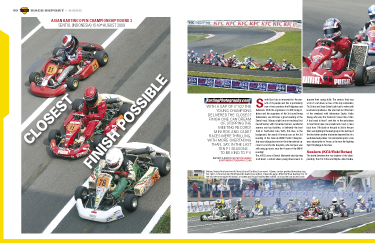 RACE REPORT – AKOC   The Asian Karting Open Championship stops in Indonesia for its third round. With a gap of 0”027 the young champions delivered the closest finish one can dream of, stopping the meeting record! Mini Rok and Cadet races were thrilling, with more overtaking than, say, in the last ten F1 seasons… to be kind to F1! 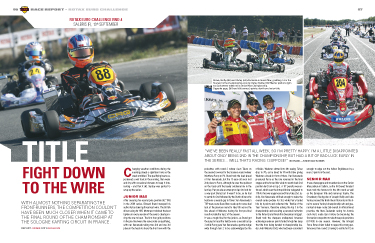 RACE REPORT - Rotax Euro Challenge   With almost nothing separating the front-runners, the competition couldn’t have been much closer when it came to the final round of the championship at the Sologne Karting circuit in France. 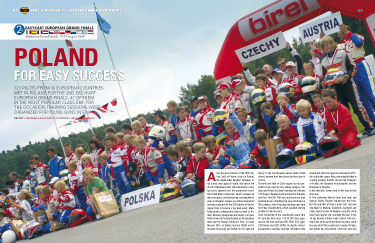 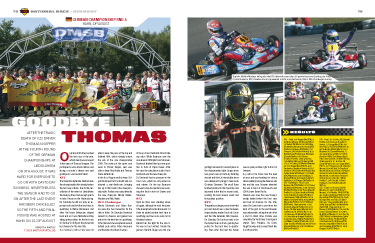 NATIONAL RACES   This month features the ever-growing CKI Championship from across the ocean, at its third round. UK-based FKS Championship travels to Belgium for its double-header; while the BNL Series ends two weeks on the same track at Genk in great style. Also, an emotional field in Hahn says goodbye to Thomas Knopper in the last round of the German Championship. Denmark hosts the Rotax Nordic Championship; Poland features two meetings in the span of one week.


COLUMNS – Mondokart, 2010 CIK calendar   The news section kicks off with a preview of the 13th Monaco Kart Cup, which will be held in mid October. Also, a quick review of the spectacular Kartmasters British Grand Prix; briefs from the Norwegian Cup; a new 50 years celebration kart by Birel; the wrap-up of the Formula BMW Europe season... closing the issue with a preview of what the 2010 CIK-FIA calendar looks like!