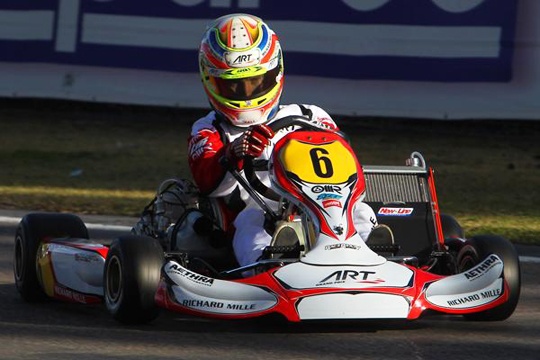 Press Release by: Art Grand Prix
Christian Sørensen (DK) joins ART Grand Prix in KF.
A fantastic success after a commanding weekend for the talented Brit on ART Grand Prix at the final round of the WSK Champions Cup held in La Conca, Italy.
Fast, cool, victorious. Supported by his exceptionally fast equipment, British star Ben Hanley kept his cool during a truly eventful weekend to bag the first major title of the season for the team managed by Armando Filini.
After stopping the fastest lap in a damp qualifying (1’02”577) to start the first KZ2 heat from pole, Hanley showed all his speed by fighting for the win in all three heats. Twice 2nd and once 4th was enough for Round 1 winner to conquer the front row for the point-awarding prefinal. Taking advantage of a brilliant start that projected Hanley in the lead, it was all about controlling his direct rivals and keeping an eye on tyre wear. And despite being demoted to 2nd, it was enough for Hanley to match the laptimes of the prefinal winner to start the final from front row.
With more than 30 points advantage on his main rivals going into the final, the objective was to start fast and get enough points to close on top. And Hanley did just that! The fast Brit first moved to the lead after an explosive start, then fought hard after dropping few positions managing to move back up to 3rd. However, right before the end, Hanley is hit by a rival (Camponeschi) and prevented from obtaining another great result. Under the chequered flag Hanley keeps the 6th position and prefers not to risk further with a driver who is not always “unsurprising”. Despite all adversities, an extremely solid performance by the Brit granted sufficient points to celebrate a truly deserved title.

Too bad that Hanley’s successful weekend was paired by a tough qualifying and heat session for Torsellini, who suffered an unusual technical issue to the engine – with water leaking from the connecting tube - both in the last heat and in the prefinal. Forced to start the final from the back of the grid, the Italian driver managed to close just outside the top-10 showing excellent laptimes.

In KF, ART Grand Prix Finland Tuomas Tujula was the best of the ART Grand Prix lot in qualifying by stopping the 8th fastest time. In the heats, Brazil’s Sette Camara hit the top-10 twice despite having to start from the back of the grid following a tough qualifying. With the two-prefinal system giving access to the final to the top-17 of each group, Tujula, Sette Camara and Okada - who struggled with pace in the heats – made the cut with three solid performances, particularly the Japanese driver, who moved up from 21st to 12th, and the Finn, from 17th to 6th. Unfortunately, Tujula was out right after the start due to a contact, while Sette Camara and Okada fought hard after dropping several positions at the start to close 15th and 22nd respectively.

In KF Junior, with 70 drivers on starting grid, 3 out of 5 drivers wearing ART Grand Prix colours made it through to the two-prefinal system after scoring some top-10 results in the heats. Josh Smith, Yifei Ye and ART Grand Prix Finland’s Patrick Pasma were all protagonists of a solid performance and managed to come through the field quite strongly, with the Brit supported by Racing Steps Foundation program closing in 16th from 32nd on starting grid.


ART Grand Prix is also delighted to complete his drivers’ line-up for the KF class by welcoming the Danish driver Christian Sørensen. Christian is one of the most promising young talents of his generation and will take part with the Factory Team in the WSK Super Master Series and in the CIK-FIA European and World Championship rounds.

Armando Filini (Team Manager):
”First of all I’m really glad that we managed to come out on top in KZ2 despite some unpredictable rivals, and I have to praise the exceptional sportsmanship of our driver Ben Hanley. He had to put up with some blatantly unfair race conduct, but he kept his cool and was rewarded with a sweet victory.
Regarding the technical problem suffered by Torsellini in the last heat and in the prefinal, one thing we know for sure is that it had nothing to do with the radiator or the tube, as the problem is most likely within the engine, and TM is therefore investigating.
One last word about our KF and KF Junior drivers: despite the difficulty in adapting to damp track conditions, we are happy to highlight improvements in both categories, like Okada’s exceptional first part of the final, in which he was the first driver to go below the 47”4 mark. We have to keep pushing, working both on the technical and physical aspects in order to keep our performance consistent throughout the race.”