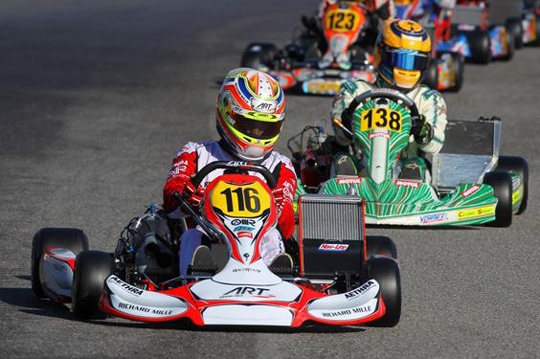 Press Release by: Art Grand Prix
Only the podium was missing after ART Grand Prix positive weekend at the 19th Winter Cup held in Lonato, Italy on 21-23rd February. With a strong line up of drivers in the three categories, the team managed by Armando Filini made a strong statement in view of the 2014 racing season.

KZ2 is yet again the category that bears more fruits for ART Grand Prix, with a spectacular drive by Ben Hanley who came only few tenths short of the podium due to tires issues throughout all the weekend. Despite the unpredictable weather conditions, with sunny skies disrupted by relentless showers, the experienced Brit fought for the podium till the very last turn, proving the excellent performance of the ART Grand Prix package. Next to him, Italy’s Mirko Torsellini hit a very good 6th place following a consistent performance in the heat session and in prefinal, while carrying out some tests of the brand new aluminum brake discs with ceramic surface – already available for the market - that allow 1 kg less in the rotating mass as well as easier adjustability for improved performance.

The Factory drivers’ best performance was also matched by Luca Tilloca and Massimo Mazzali, in force with ART Grand Prix satellite teams, both proving very competitive all the way to the final.

In KF2, all four drivers wearing the ART Grand Prix colours, at their debut in the category, made it to the final stages, with Nikita Sitnikov taking the ART chassis at only 3 tenths from the podium after having been on P3 for good part of the race, only to be displaced with 5 to go. The Russian driver, at his debut on the ART Grand Prix chassis, showed great feeling with the new equipment always lapping with the fastest on track. Good performance also by Brazilian Sette Camara, who improved considerably in the latter part of the weekend, Japan’s Takuja Okada and ART Grand Prix Finland Tuomas Tujula, both out in the final in the first lap but consistent already from the heats.

In KF3, the fierce competition saw China’s Yifei Ye and UK’s Josh Smith making it through to the final stages, sided by ART Grand Prix Finland duo Patrik Pasma and Paavo Tonteri. Particularly the latter was very fast throughout the weekend, but had to make do with a 21P starting position in the prefinal as a result of a bad heat result following a 6th, 3rd and 8th in the remaining three heats. Best of the lot in the final proved the Chinese driver despite having to race with a bruised rib.

“I would start by saying that I’m very optimistic about our performances. In all categories our laptimes showed we can compete for the win because the equipment is very performing. Also, both in KF2 and KF3 most of our drivers were at the debut in the category, so I’m very happy that almost all of them managed to go through to the final stages, and some of them to compete for the podium. In KZ2 I’m particularly glad to comment on Tilloca and Mazzali, two drivers of our satellite teams who showed the top performance of our equipment, with laptimes matching those of our Factory drivers. I can’t be entirely satisfied with the results, we suffered the unstable conditions of the track and found some difficulty with the consistency of the Bridgestone sets of tyres, but we look to the busy racing month ahead with optimism.”