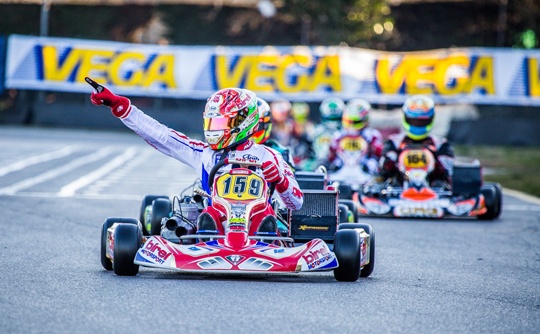 Author: Vroomkart International
Extremely hard-fought races from start to finish saw the three drivers out of the 208 on the entry list come out on top in the three categories contested.

by M. Voltini
An always popular Winter Cup, which saw as many as 208 drivers in KF3, KF2 and KZ2 gathering on the Italian circuit in Lonato, provided a very exciting show.
In KF3, front row duo failed to take advantage of the starting position with Brit Ticktum sneaking through to lead from behind. But his fellow countryman Enaam Ahmed moves back in the lead in a matter of few laps, going on to win ahead of his teammate Fewtrell and Italy’s Travisanutto.
In KF2, Nielsen and Basz fight hard for the lead for big part of the race, when also van Leeuwen joins in to move past both. It will be 2013 KFJ World Champion Alessio Lorandi to have the better of the lot, grabbing the lead with a breath-taking overtake near the end, followed in toe by Tiene, who tries a last second charge unsuccessfully, and Hiltbrand.
In KZ2, polesitter Dalé hesitates at the start allowing De Conto through for the lead. The Birel driver would never look back, despite Lammers kept the pressure high for the entire race distance. Great fight for 3rd also, with Dalé having the better of Zanchetta who almost spins while defending the position.