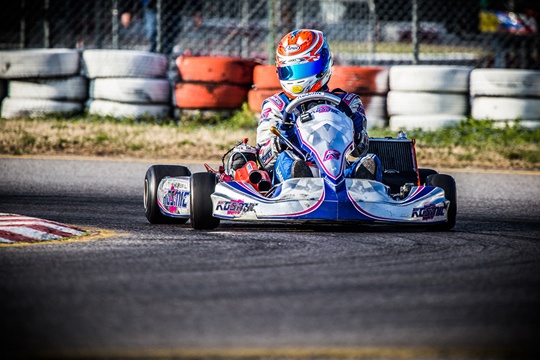 Press Release by: South Garda Karting (Lonato)
In the picture: Luca Corberi on track during KZ2 free practice in Lonato (Ph. Davide Pastanella).
Practice officially started the international season opening race, the Winter Cup, at the South Garda Karting of Lonato. All the stages of the event available through Live Timing at the web site www.southgardakarting.it. Several excellent debuts with new teams taking on the challenge of competing in higher categories.

Lonato del Garda (Brescia, Italy). Engines have been switched on for the 19th Winter Cup, race that is underway at the South Garda Karting circuit of Lonato, as the green flag has been waved today, 19th February, for the first free practice and the first timing indications that will continue tomorrow,before the event's take off on Friday with qualifying heats.
All the stages of practice and races will be available through the Live Timing service that is already active at www.southgardakarting.it. The brand new software is present at all the main karting events and in this occasion it has been employed by the organizers of this important race that marks the beginning of the international season. This is a further ace up the sleeve of this 19th edition of the Winter Cup that will provide fans with another way to follow all the phases of the event all the way to the Finals scheduled for Sunday 23rd February.

Categories KF Junior, KF and KZ2 will be on track as all the main constructors and the most prestigious teams on the international scene willfield their top drivers to hunt for the victory. The victory of the past edition went to Alessio Lorandi (Tony Kart-Vortex-Vega) in KF3, to the Dutch driver Max Verstappen (CRG-Tm-Vega) in KF2 and to the Monegasque Charles Leclerc (Art GP-Tm-Vega) in KZ2.

The hall of fame of this very important early season event is full of excellent names like that of Tonio Liuzzi, who won the first edition back in 1996 on Kalì Kart-Crg. Among the top drivers of this edition, the Italian driver Marco Ardigò who will be competing in KZ2 with Tony Kart after winning the Winter Cup in 1998 and 1999 with CRG. Davide Forè will also be racing in KZ2 but now he will be wearing CRG's colors after winning the race back in 2000 and 2003 with Tony Kart.

A lot of excellent debuts will mark the move of several drivers to new categories or teams. The Italian Alessio Lorandi, winner of KF3 last year, will be making his debut in the higher category KF together with several other talents ready to take on the challenge of higher categories as 2013 KF3 World Champion Luca Corberi who will be making his debut in the challenging KZ2 with the shift. The world champions Bas Lammers, who moved to Formula K, and Arnaud Kozlinski, on Intrepid, will be among the top drivers also present in Lonato.