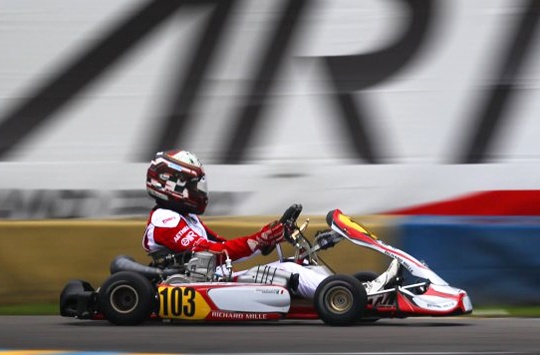 Press Release by: Art Grand Prix
New challenges, more races and new line-up for ART Grand Prix 2014 international racing season.
Before the season kicks off with the first official race of the season, the classic Winter Cup in Lonato (I), ART Grand Prix was protagonist at the CIK-FIA and WSK Series Prize Giving ceremonies. The first, held for the first time ever in Milan, Italy, saw Ben Hanley and Charles Leclerc receiving the CIK-FIA awards for the runner-up titles in the World KF Championship and World KZ Championship respectively from the hands of the President of the CIK-FIA, Sheik bin Isa Al Khalifa Abdulla.

At the WSK Series awards, ART Grand Prix Racing team collected as many as 8 trophies putting the icing on the cake of its outstanding 2013 season. Ben Hanley and Ben Barnicoat were the recipients of four awards, having claimed twice 2nd in the Euro and Master Series the former, and 3rd and 2nd the latter. Also, Mirko Torsellini was awarded the prize for his 3rd place at the Final Cup in KZ2, while ART Grand Prix received a total of 3 Team Cup awards, one for the 1st place in the Master Series (KZ2), and two for the 2nd (KZ) and 3rd (KF) in the Euro Series.
Looking at the forthcoming 2014 season, which is set to kick off at the Winter Cup in Lonato (I), on 23rd February, ART Grand Prix announced the new drivers line-up.
Ben Hanley will be ART standard-bearer in KZ category and will take part in all CIK and WSK races. Next to the Brit, experienced Mirko Torsellini from Italy joined the team last November on occasion of the WSK Final Cup, and was announced officially at very successful ART Grand Prix Open Days, the three-day test organized at the Circuito Internazionale Siena (I). Completing the line-up in the gearbox category, Sam Webster from the UK will challenge the CIK KZ2 championships as well as one round of the Italian Championship, plus some test sessions in Sarno.
In KF category, Sergio Sette Camara from Brazil made the move from KF Junior and will take on both CIK and WSK titles, as well as the Italian ACI-CSAI Championship in the premiere direct drive class. Besides the young Brazilian driver, ART Grand Prix will assist Takuya Okada from Japan, who proved his worth already last year at the CIK World Championship and WSK Series.
Four young, up and coming drivers will be fielded in KF Junior, the entry-level international category for young hopefuls. Yifei Ye from China, who already boasts one season of international experience, will be joined by Malaysian Adam Haikal and Italian Filippo Lazzaroni, both at their international debut, and British talent Josh Smith of the Racing Steps Foundation program, confirming RSF trust in ART Grand Prix and its chassis after Ben Barnicoat’s success. While the Italian will take part in the Winter Cup, Margutti Trophy and Italian Championship, the other three will also enter the WSK and CIK races.
As a latest addition to the ART Grand Prix family, successful Russian team Komarov Racing and its pupil Nikita Sitnikov will race with ART Grand Prix chassis in the Winter Cup.