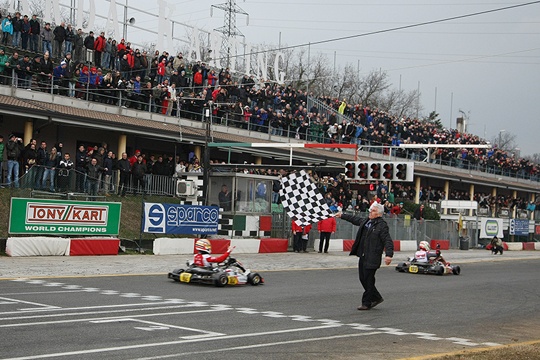 Press Release by: South Garda Karting (Lonato)
In the picture: KZ2 arrive of the 2013 Winter Cup, race won by Charles Leclerc from Ben Hanley to Davide Forè (Ph. FM Press).
The Winter Cup of Lonato to be held next 23rd February 2014 is to feature a good number of drivers on track. KZ2 will see 83 drivers at the start, while KF has 59 entered drivers and KF Junior 89. Theprogramme will officially start on Wednesday 19th February with free practice and karts fitting the transponder.


Lonato del Garda (Brescia, Italy). 230 drivers will be taking part in the 19th Winter Cup of Lonato (Brescia, Italy), race scheduled at the South Garda Karting circuit from 21st to 23rd February 2014. The event will see on track the classic three categories KF, KFJ and KZ2 in what is going to be the first important race of the International CIK-FIA calendar.

The first international round of the season started on the right foot and it will not only feature a very good number of drivers on track but thequality of the racers is also going to be very high, as they are all top names at an international level.

The most powerful category, i.e. KZ2 with shift and Bridgestone tyres, will have 83 drivers at the start as several works teams are ready to challenge each other on track. Furthermore, some top drivers took on the challenge ofmaking their debut with new teams such as the world champions Bas Lammers, who moved to Formula K, and Arnaud Kozlinski to Intrepid. Among the top teams, CRG will be present in KZ2 with Jordon Lennox-Lamb, Alex Palou and Fabian Federer, while Davide Forè will be racing with team DTK. Tony Kart will field Marcio Ardigò, Flavio Camponeschi and Andreas Hansen, Art GP will take  Ben Hanley on track as well as Mirko Torsellini and the Russian driver Vladislav Kurakin, while Birel will line up Paolo De Conto. Some other important teams will also be present like EnergyCorse, DR, G.P. Racing, Maranello Kart, CRG Holland, PDB, KK1, CKR, AVG, the new French team CPB and Tribe One that will be fielding Alessio Piccini andLuca Corberi at the debut in KZ2. Some other top names will be among the numerous private drivers, such as Marcel Mueller, Luca Tilloca, Loris Spinelli, Andrea Dalè and many more.

In KF - category equipped with Bridgestone tyres - 59 drivers are set tomake it to the start. The Swedish team Ward Racing and the British Ricky Flynn will be among the top teams as the latter will have the European Champion Lando Norris among its ranks. A good number of teams will also be present such as Tony Kart, Kosmic, CRG, Birel, Energy Corse, Art GP, DR, CRG, Forza Racing, VDK,Kartronix, Komarov, Gandolfi and many more. The two main KF Junior title contenders moved to the higher category will be of the starting lot too, as the 2013 World Champion Alessio Lorandi will wear Baby Race's colors and the vice-champion Leonardo Pulcini will get on track with team Morsicani Racing.

KF Junior - on Vega tyres - will be once again the most crowded category as it will have 89 young promises of international karting on track. Ward Racing will line up a high number of drivers such as the Russian Alexander Vartanyan and the American Logan Sargeant. Very good potential also for Max Fewtrell who will be racing withRicky Flynn, Eliseo Martinez and Archie Tillett with CRG, the Polish sisters Julia and Wictoria Pankiewicz -- both coming from the Academy Trophy  -- will compete on the karts run by Forza Racing. Daniel Ticktum and Luca Legeret  will get on track with Zanardi Strakka Racing, James Pull with Tony Kart, while Baby Race will field an army of drivers among which Giuliano Alesi -- son of F1 champion Jean Alesi -- who is at his second year of activity. Several otherdrivers can also aim to the victory which calls for a spectacular race all the way to the end.

The official programme of the event is going to start on Wednesday 19th February with free practice and timing service through transponders. Another free practice session will take place on Thursday 20th February, while on Friday practice will be followed by qualifying and heats. Some more heats will take place on Saturday. Repechage races, Prefinals and Finals will end the event on Sunday 22 February.

All information will be available at www.southgardakarting.it