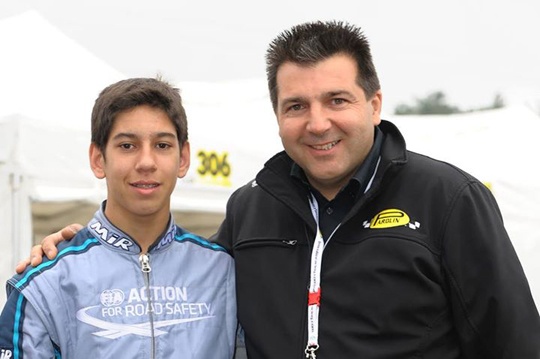 Press Release by: FIA Karting
The Italian firm Parolin has become increasingly important in the manufacturing of kart chassis since its inception in 1986, under it's own name or for other brands while remaining relatively quiet.

Parolin Racing Kart and its subsidiary FIM Motors won the tender in 2009 from the CIK-FIA to supply engines for the U18 World Championship and complete karts for the Academy Trophy. The U18 was abandoned in 2013, but the Academy Trophy has been retained for three more years as a formula for discovering young talent worldwide.

"Meeting the specifications of the CIK-FIA was a source of great satisfaction for the company, but also a great challenge," said Albino Parolin. "We have the right products for the U18 and the Academy, and also had to put in place all the necessary logistics and services at the tracks. From the first year, 2010, we successfully completed the mission we had been given, then refining the details to arrive today at a perfect mastery of the subject."

"The quality of our production and the unique experience gained in the first three seasons earned us the renewal in 2013 for another three seasons of the Academy Trophy. It is unfortunate that the U18 World Championship calendar has disappeared, it was a great class where drivers aged 15 to 18 from all over the world could compete on equal terms in top-level competitions at low cost.

"We believe more than ever that a one-make formula with drawn engines is perfectly suited to the current economic environment. Our key competition system is a winner in many countries to fight against overspending and the declining attendance of national and international competitions in non-gearbox CIK classes. It is good for us, of course, but also for the good of karting in general, which must go back to the popular craze of its origins and rebuild its base, so we hope that the formula finds its place in many countries."