Author: Vroomkart International
Waiting for the Christmas break and a period of well-deserved holiday, all of us at VROOM have worked incessantly to make an issue full of news, technical articles and interviews. And if you can’t wait to receiving the next issue, stay tuned on VROOM.it for all the latest news and articles’ preview.


SPECIAL – ENGLISH KARTING HITS THE HEADLINES At the beginning of the year we published an article on the state of karting in the UK. Now, after the media explosion of sports phenomenon Hamilton, we go back to take a closer look at today’s karting situation in the UK. Graham Smith, Paul Fletcher, Tim Parrott, Carolynn Hoy, Chris Pullman, Gary Catt and Michael Ryall shared their views with us. 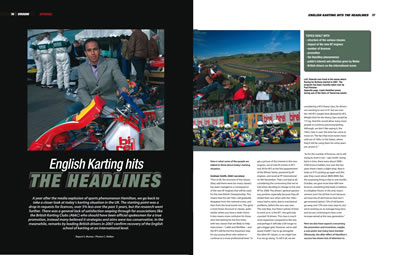 FROM KART TO F1 –KIMI COMET He’s World F1 champion, and whatsmore, with Ferrari! His picture has hit the headlines everywhere and the Press, surprised by this an unexpected ending, delve into his past trying to find out as much as they can about the Kimi’s racing career. He has practically jumped the gun, and surprised everyone. As for his experience in karts, Vroom has taken some material and photos from its archive (1997-1999) showing Kimi’s early days in karting and, also thanks to Peter De Bruijn’s help, we have been able to re-trace Kimi the comet’s racing career.  LIUZZI AND KOVALAINEN – Also in this issue we take a look at one of the most promising Italian drivers, the last who’s managed to make it into the top of motorsport after Trulli and Fisichella. We hope that Tonio Liuzzi will be able to find a top team to carry on with his F1 experience. In the meantime we go through his karting career, along with Heikki Kovalainen’s. The Finn, one of Briatore’s pupils left his mark in karting during the World Championship held in Braga in 2000. 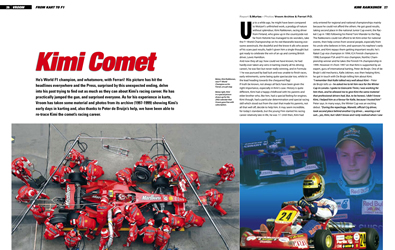 TALKING TO – UNIPRO, PIONEERING TECHNOLOGY  They have been going for twenty years now, but the enthusiasm is still there. Mogens Jessen and Claus Mortensen are the mind and soul of Unipro, a Danish company that developed and made the first data acquisition system. Today, Unipro keeps faith to its original inspiration and motivation, and still makes high quality products for leading karting manufacturers and for lots of karting fans throughout Europe. 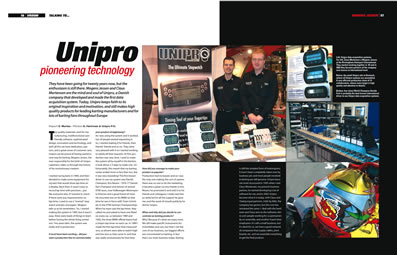 TECHNICAL SIDE – POWER VALVE Once again we are going to look at one of the elements that characterise engine used for karting in the future. Regulations for the KF class foresee a shutter power valve on the exhaust port. We know how the power of these types of engines is closely connected to the fluid mechanics of the system, and besides the casing pump it also includes the induction silencer and the exhaust system, and especially the tuning of pressure waves that go through the fluid (both fresh and burnt) during the flow. We are going to look into how it works and how effective it is, which, might be a bit hard to swallow for those who deal with this subject for the first time. 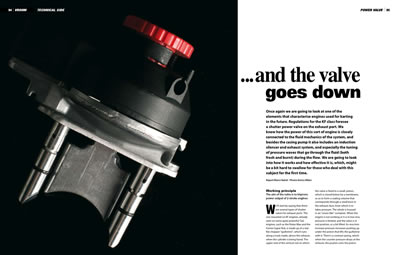 FACTORY – VAMEC We talked to Vincenzo Vannini, who set up the business more than twenty years ago, and has been running it, with original thinking (mind) and technical expertise (arm) taking the factory to the top as a karting components manufacturer, having particular attention for diagphram carburettors and specific tools for kart maintenance.  ARAI One of the best helmet manufacturers, has given Marco Natoli the opportunity to visit their European branch situated on the outskirts of Amsterdam, where the AIC Arai Inspiration Centre is. This a wonderful technological site where you can really feel and understand the philosophy that has inspired Japanese manufacturing right from the early years of Hirotake Arai. 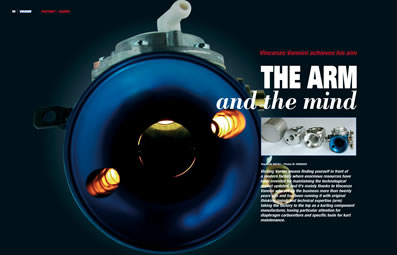 TRACK TEST –  Over the Top Is there anything more desirable than Marco Ardigò’s karts at this moment? Beyond the limit: this time our track test was carried out in Lonato, where Tonykart gave the karts (KF1 e KZ1) but not only, also the men – first and foremost Marco Ardigò – who was really outstanding during the international titled events. Paolo “Koz” Cosaro, Emiliano Saurin and Silvia Radaelli, together with the legendary Volt were also there to test the World Championship karts. 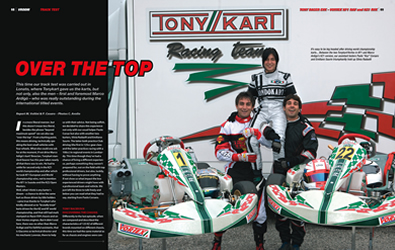 X RAYS – VORTEX RAV Ace takes all But it’s not all. Marco Natoli too joined the group, touching with hand the undisputed protagonist of the 2007 karting season, the very first with the new KF engines. With several other titles won, already steadfast, despite its brief career, just like the drivers it’s the first year, an incredible one, maybe unrepeatable too, as managing directors of the factory in Pavia say. Let’s take a look and find out what lies behind such success. 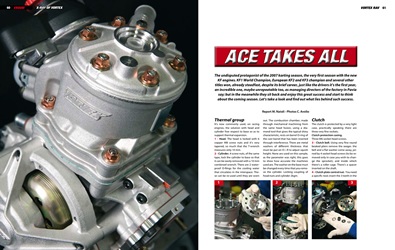 NATIONAL RACES – We keep an eye over national championships from all around the world. We start with the magnificent Supernationals XI in Las Vegas (USA) that attracted the best drivers in the world fighting in the gearbox SuperPro class. Thonon, Ardigò, Foré, Piccini, Manetti against the best of American karting. End of season race action from Spain, Hungary, Japan and New Zealand. 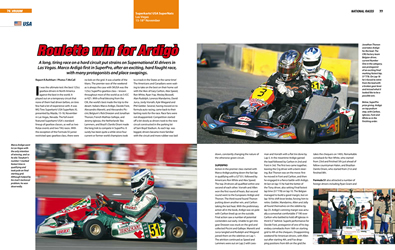 
Waiting for the Christmas break and a well-deserved holiday, here at VROOM we have worked hard to give you an issue full of news, technical columns and interviews. And if you can’t wait to receiving the next issue, stay tuned on VROOM.it for all the latest news and articles’ preview.
A very Merry Christmas to you from all of us: Giuliano, Fabina, Antonio, Armando, Daniele, Giorgia, Marco, Maria, Maurizio, Monica, Salvatore, Stefano.

Enjoy your copy and see you at the race track for a blasting 2008 season.
Giuliano Ciucci Giuliani