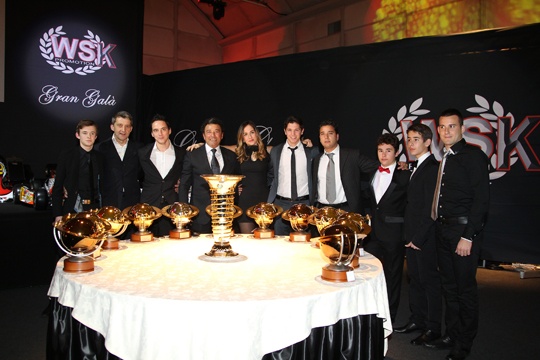 Press Release by: CRG
In the pictures: All trophies received by CRG and Tinini Group at the WSK Gran Galà held in Adria.
CGR obtained the highest rewards for season 2013 with Max Verstappen at the WSK Gran Galà. The Dutch driver secured in fact the WSK Euro Series KZ1, the WSK Master Series KZ2 and also the trophy “Driver for the Year”.
Teams and drivers victorious on CRG chassis have also been awarded as the companies of Tinini Group.

CRG got the full haul once again in the WSK Gran Galà, the prize ceremony of the championships organized by WSK Promotion that closed the 2013 season at the conference room of the Adria International Raceway. A great final applause celebrated CRG's most victorious driver of season 2013, Max Vertappen, who has also been received the very prestigious "Driver of the Year" trophy.

The title of "Driver of the Year" went deservedly to Max Verstappen and the prize has been collected by Nicole Tinini who has been representing CRG and the Dutch driver that could not make it to this event due to a conflicting commitment in the United States.

CRG obtained also some other prizes at the WSK Gran Galà held in Adria, such as the victory in the KZ1 WSK Euro Cup thanks also to the final third place secured by Jonathan Thonon, and the second prize in the WSK Master Cup.

Important results have also been achieved by the teams and drivers that had been competing on CRG chassis, like team Gamoto Racing that had a very good season winning 60 Mini's WSK Euro Cup and WSK Master Cup thanks to the results of its drivers, or  Eliseo Martinez who got the victory in the WSK Euro Series and in the WSK Master Series and Konstantinos who earned the third place of the WSK Euro Series.

All participants to the WSK Gran Galà have been given a very nice souvenir: the WSK Promotion volume that illustrates the CIK-FIA and WSK 2013 championships with 600 pictures and a cover dedicated to Max Verstappen and to his incredible season. The book has been produced by Vallardi in Italian and English with text edited by Fernando Morandi, Press.net and pictures provided by Cunaphoto and other important agencies. It will be available in specialized book stores in Europe, Canada, United States, South Africa, Australia and New Zealand.