Author: Vroomkart International
Vroom 101 features Finn Aaro Vainio on the cover. The Maranello driver keeps cool in France to win the continental SKF title at 15, making him one of the youngest – if not the youngest – winner of the queen class in history. A great progression and an outstanding display of maturity by the Finn. The editorial is dedicated to the very sad loss of Thomas Knopper. An accident that raises questions on the safety of our sport, something that cannot be taken for granted, not even for one second. Our hope is that we will need no accidents in future for keeping our safety measure always one step ahead. 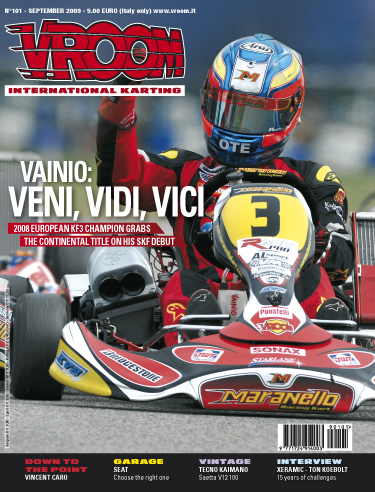 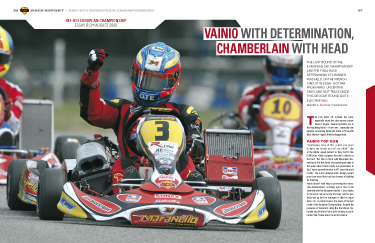 RACE REPORT SKF-KF2 European Championship   The last round of the European SKF Championship and the final race determining KF2 winner was held on the French circuit in Essay, not far from Paris. Uncertain skies and fast track made this decisive round quite electrifying. 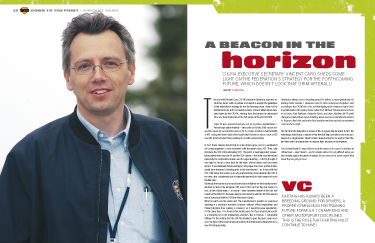 DOWN TO THE POINT Vincent Caro   CIK-FIA Executive Secretary  Vincent Caro sheds some light on the federation’s strategy for the forthcoming future, which doesn’t look that grim afterall! 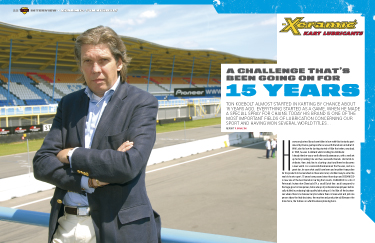 INTERVIEW Xeramic – Ton Koebolt   Ton Koebolt almost started in karting by chance about 15 years ago. Everything started as a game, when he made a special spray for chains. Today his brand is one of the most important fields of lubrication concerning our sport and having won several world titles… 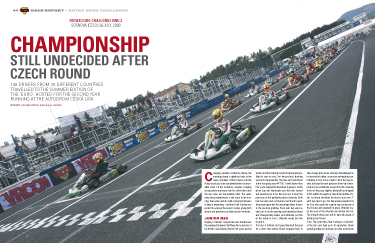 RACE REPORT Rotax Euro Challenge   148 drivers from 30 different countries travelled to the summer edition of the ‘Euro’, hosted for the second year running at the Autodrom Ceská Lípa. 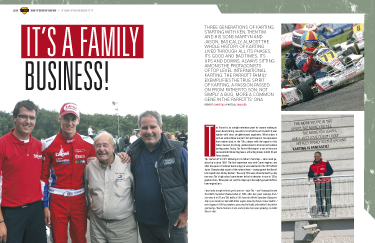 INTERVIEW Tim Parrott   Three generations of karting, starting with Ken, then Tim and his sons Martyn and Jason. Basically, almost the whole history of karting lived through all its phases, its good and bad times, its ups and downs, always sitting among the protagonists of top level international karting. The Parrott family exemplifies the true spirit of karting, a passion passed on from father to son, not simply a bug, more a common gene in the Parrotts’ DNA 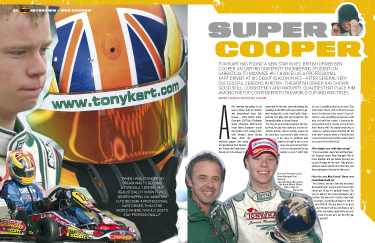 INTERVIEW Ben Cooper   Tonykart has found a new star in KF2: British driver Ben Cooper. An Oxford University engineering student on sabbatical to maximize his chances as a professional kart driver. At his debut season in KF2 – after several very successful seasons in Rotax - the British driver has shown good skill, consistency and maturity, qualities that place him among the top contenders to the World Cup and WSK titles. 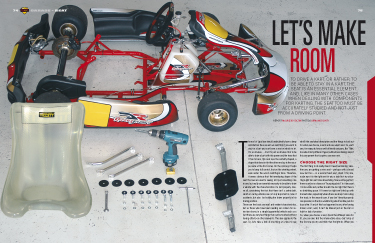 GARAGE Seat   To drive a kart, or rather, to be able to stay in a kart, the seat is an essential element. And, like in many other cases when dealing with components for karting, the seat too must be accurately studied and not just from a driving point. 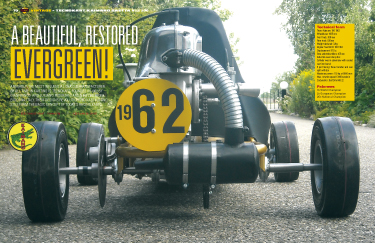 VINTAGE Tecnokart Kaimano Saetta V12 100   Arguably the most influential chassis manufacturer of all time in karting is Tecnokart. Founded in 1962 by Gianfranco and Luciano Pederzani and Nini Zini from Bologna Italy. Their designs revolutionized karting and still form the basic concept of today’s racing karts.… 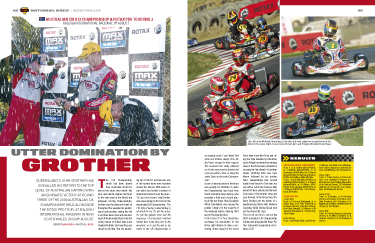 NATIONAL RACES   We start the ‘national race’ section with a glorious event in the USA, the WKA Manufacturers Cup showing plenty of hot racing action; the UK featured the fifth round of the Formula Kart Stars at PF International, in the typical British rainy summer weather. From Japan, round 5-6 of the KF1 series; Brazil hit two circuits for a double National Championship weekend; Australia saw the 3rd round of the CIK KF2 Championship.


COLUMNS – Mondokart, Last Page, October national and CIK calendars   The first page of our news section is dedicated to Thomas Knopper, the former European KZ2 Champion who was killed in a racing accident in Germany. A tragic news that involved a young man who will stay in the hearts of all karting fans.
Also in the news, Danilo Rossi’s new circuit; SKUSA Supernationals filling in grids fast; Freem UK launched; Formula BMW restructured for 2010; Rotax Euro Challenge 2010 calendar; European Superkarts Championship final round.
Last Page is dedicated to unforgotten Brazilian champion Ayrton Senna: a truly emotional letter Achille Parrilla wrote on the day that Ayrton was killed at Imola.
As usual, we end with October racing calendar, featuring 32 events from 17 countries around the world, and all CIK races.