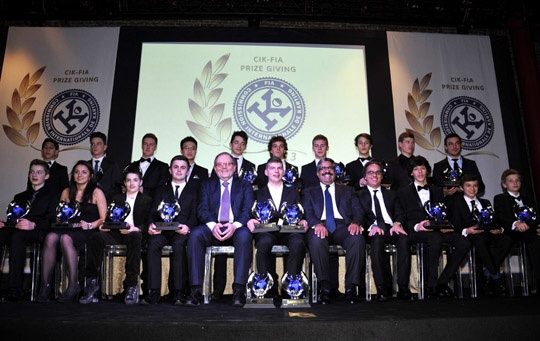 Press Release by: WSK
During the gala dinner organised in Milan by WSK Promotion, all the 2013 CIK-FIA Champions got awarded in the presence of the President Shaik Abdulla bin Isa Al Khalifa.
The prize-giving ceremony of the 2013 Championships  - organised by WSK Promotion - was celebrated on Saturday 11th January in Milan, in the presence of the FIA International Karting Commission top brass. The venue of the ceremony was the hall of the East End Studios and was hosted by Luca De Donno, the President of WSK Promotion. De Donno managed last year's organisation of all the Championships: it was the first time that the CIK-FIA Championships had an external promoter. The protagonists of the evening, in front of a large group of members of the international press, were the winners of the categories of the World and European Championships, besides the winners of the CIK-FIA Karting Academy Trophy. Jean Todt, the FIA President, could not take part personally in the event and sent a message which was read before the beginning of the ceremony.

The CIK-FIA Presidency and its Champions
The KF World Champion, the English Tom Joyner (Zanardi-TM-Vega) received his trophy from the hands of the CIK-FIA President, Shaik Abdulla bin Isa Al Khalifa. The President gave the prizes also to the runner-up, the English Ben Hanley (Art GP-TM-Vega), and the Dutch Max Verstappen (CRG-TM-Vega), third in the Championship. Kees Van De Grint, The CIK-FIA Vice-president, handed over the prizes to the first three drivers of the KZ World Championship: Max Verstappen (CRG-TM-Bridgestone), the World Champion, the French Charles Leclerc (Art GP-TM-Bridgestone) the runner-up, and the English Jordon Lennox-Lamb (CRG-Parilla-Bridgestone), third. It was then the turn of the ACI and ACI-Csai President, Angelo Sticchi Damiani,who handed over the prizes to the drivers of the World KF Junior Championship: the Italian Alessio Lorandi (Tony Kart-Parilla-LeCont), the World Champion, the Italian Leonardo Pulcini (Tony Kart-Vortex-LeCont), the runner-up, and the third of the standings, the Russian Robert Shwartzman (Tony Kart-TM-LeCont).

The 2013 season in a yearbook
During the evening, it has been presented the 2013 Karting Yearbook published by Vallardi and edited by the journalist Fernando Morandi, with the cooperation of WSK Press Office. The yearbook features the photos of Giovanni Cuna and the reports about the World and European CIK-FIA Championships as well as the WSK Series season.