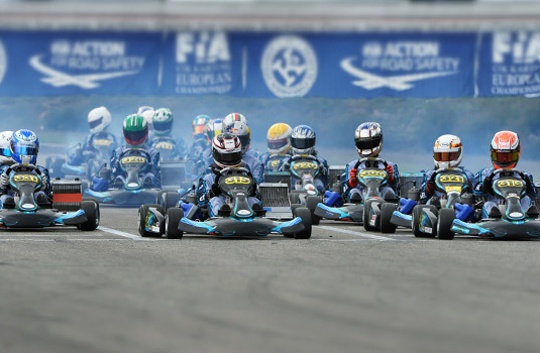 This year it is poised to break popularity records and is open to a maximum of 51 drivers for a very reasonable overall cost. The ASNs concerned should delay no longer in selecting their national representative.

Since 2010, the concept of the CIK-FIA Karting Academy Trophy has proved its worth by revealing undeniable talent with a great future such as the Monegasque Charles Leclerc, the winner in 2011 ahead of the British driver Benjamin Barnicoat. To succeed in this competition, the skill of the driver takes precedence over technical and financial aspects, with unparalleled fairness. Parolin provides chassis fitted with one-make FIM engines and the random exchange of engines flattens any differences. In 2013 for example, the Belgian Samuel Potty swapped his engine with the last ranked between the two races at the Ortona meeting, which didn't change his performance, 2nd in both races, and didn't prevent him from winning the championship. In summary, the CIK-FIA Karting Academy Trophy is the fairest, most open and least expensive global competition in karting.

Besides its strictly identical complete karts, the CIK-FIA Karting Academy Trophy is based on several key points. All competitors receive the same race suits featuring the FIA Action for Road Safety logo, kindly provided by MIR, and a pair of gloves. They will have similar awnings, 4.5m by 3m. They must have an International C-Junior license and have been born between 01.01.1999 and 31.12.2001. This year, drivers participating for the first year in CIK-FIA events will also be able to compete if they wish in the CIK-FIA European and World Championships in KF-Junior.

Environmentally friendly E10 fuel will be delivered by Panta, while tyres are the 2014 Option type from Bridgestone and cost €165 a set. For the first meeting of the season, three complete sets will be allowed, two for free practice and one from qualifying to the final. For the other events, two new sets and used tyres will be allowed, a new and a used set for free practice and a new set from qualifying to the final.

The commitment, including the rental of complete kart, suit and gloves, will be €2,095 for the three races of the 2014 season, plus a deposit of €600. Drivers will need to organise their own mechanic and necessary tools.

The three events on the calendar for 2014 will take place at the same time as the CIK-FIA European Championship & World Championships and will enjoy the ambiance and impact of prestigious meetings alongside the world's greatest drivers. The first meeting will take place from June 12 to 15, 2014 at Genk (BEL), including a practice day. The second round will be at Wackersdorf (DEU) from 11 to 13 July and the last will be from 10 to 12 October at Sarno (ITA).

With a maximum of 50 nationalities and one entry reserved for the selection of the FIA Women in Motorsport Commission, places may be in high demand. The CIK-FIA urges ASNs not to wait until February 3rd to register for the campaign. Drivers from countries without CIK representation may register directly.

For questions or additional information from ASNs, drivers or competitors, please contact the CIK by email at cik@fia.com