Author: Vroomkart International
The relationship between PDB and CRG have brought about the Maddox, a new model that brings together the quality of both 'parents', starting from ease in driving.

An evident tendency seen during the last kart chassis homologation, the one valid for 2009 to 2014, is the one for which the best known manufacturers were making several models for third parties. These “third parties” have from time to time been other smaller manufacturers, who put their trademark and then assembled the parts, or drivers (even F1 drivers) and others working in this field. In one case though, we were faced with two authentic authorities of top level in this field: CRG, headed by Giancarlo Tinini and Peter De Bruijn, PDB team owner, that is, one of the strongest on the international scene, which has already proved capable of competing with equal arms against official teams. Important elements, whose meeting has brought about a new chassis, the Maddox. This is one of the products where you don’t see anything exceptionally different, but it’s in this that you find amazing sturdiness. There is nothing revolutionary about the design of the body, on the contrary, it is in agreement to the latest manufacturing standards only with one or two of its own characteristics, and it’s in this that we have the best of each “parents” the know-how of a great factory and that of a team that for some years isn’t just a simple racing team belonging to a chassis manufacturer. And giving rise to something that we cannot define just as being simply “interesting” but much more. Peter De Bruijn himself is enthusiastic to have his brand together with that of Gillard traditionally used for racing, enough to say: “It is fantastic to have a second and new brand and will give our teams and company a big boost forward”. This speaks for itself, there’s nothing else to add concerning his expectations for the future of this model of kart. 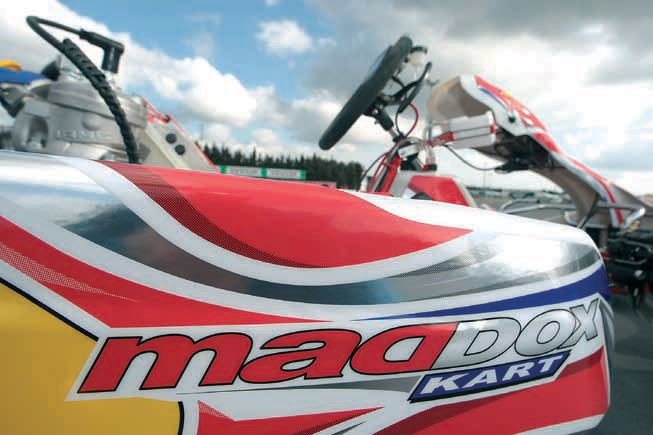 The Maddox is one of the products where you don’t see anything exceptionally
different, but it’s in this that you find amazing sturdiness. There is nothing revolutionary
about the design of the body, on the contrary, it is in agreement to the latest manufacturing
standards only with one or two of its own characteristics, and it’s in this that we have the
best of each “parents”


BORN WELL AND READY TO RACE
As usual we’ll take a closer look at the technical and manufacturing details in a separate column. However, we underline that we came into contact at the official free practice held at the circuit Muro Leccese before the first round of the WSK championship, something that has enabled us to find a decent track despite it being cold. In fact tyre pressure, at first quite high due to the cold environmental conditions, was after brought to the usual and normal 0.55 bar. Tubes for frame are 30 mm in diameter and this leads to believe that it can adapt to both these conditions and to conditions where there’s much more grip, in this last case with the effect of “freeing” set up. The thing is that, even if this model was in its early base of development, it has positively surprised us from the start. Not so much, perhaps, for its clean performance, but for its trueness the way it made us immediately understand what was happening. For example, skid induced after first 5-6 laps was only due to high pressure of tyres, not to anything else. On trying to get a bit more grip, tracks were narrowed and the effect though was that kart behaviour on the track was slightly rougher. 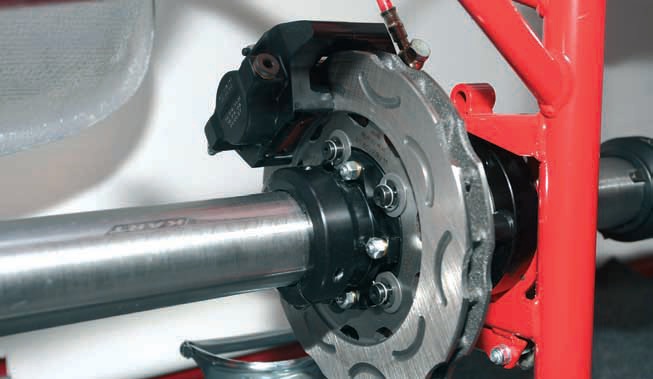 IT GIVES AND GETS ASSURANCE
But once tyre pressure was lowered again and we returned to the right track measurement the response what any driver would always like to have in racing on circuits like La Conca. Clean behaviour increases as we went along and besides being easier to drive, you have less apprehension, it really enables you to “shoot” round corners with such self-assurance that is rewarded. You have always got the sensation that it the Maddox just won’t betray you, and can makes your performance and corner entry improve lap after lap and there’s no second chance (because even in normal situations you make the most of the margin of track and curb available) round difficult corners like some you find at Muro Leccese, starting from the double turn after the finishing line. A very fast corner where, if you slow down too much, after it is impossible to pick up speed lost after. Having more self-assurance you automatically are able to concentrate more on other important aspects of racing, so you can follow the “right” path line. The result is that also the engine – a Iame for KF2 “straight from the box”, that is new and just ran in – gives more yield because it hasn’t got to take on the task of picking up speed under turning stress. 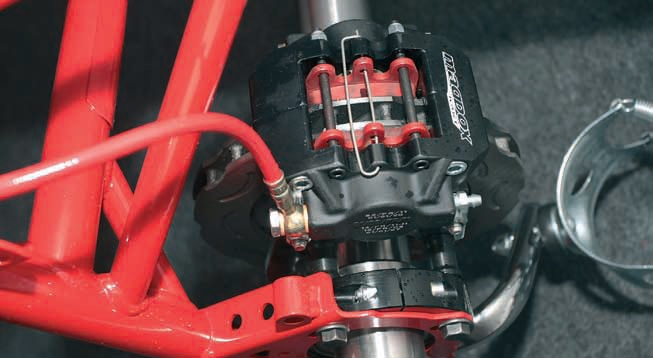 FOR A BETTER START
So, time improves with each lap but whatsmore you realize that you are really starting to use the technical material you have properly. And this is only reasoning in terms of “user friendly” results referring to the Maddox. This is a characteristic that that we already found in the chassis used by the PDB team during the last test, but that in this case absolutely assure the very best. Helping no end to meet the requirements for getting to know a Kew kart – like this one – or a new track. Besides giving unique “internal self-assurance” in heated racing and in decisive instants. And improving with each lap, going almost from a sort of shy approach to the track and track conditions, that this chassis makes all hesitations superfluous, and even lap time automatically become what you’d expect it to be. Even more appreciated results these, if you think that it is a new chassis, in fact in set up, they still haven’t decided to use supplementary bars, which can be mounted but aren’t. If you can tell what the day’s going to be like by how it starts, well… 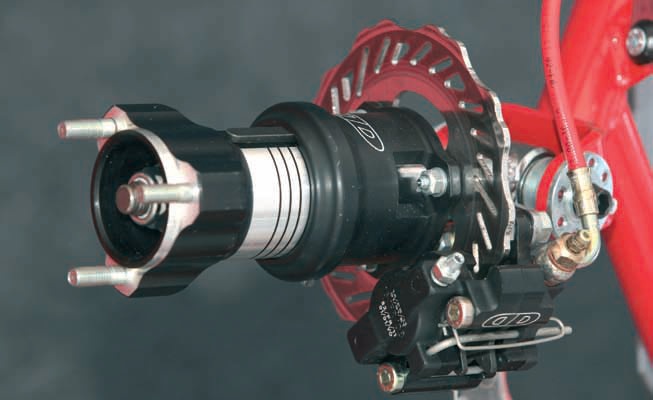 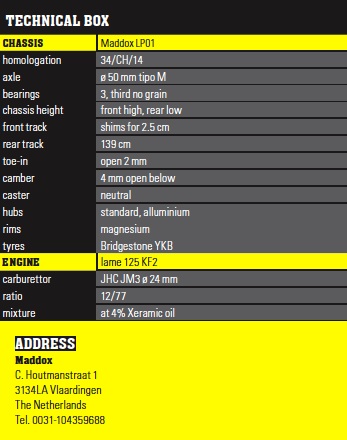 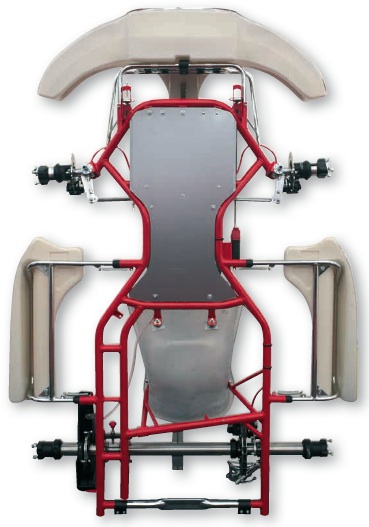 Tubes for frame are 30 mm in diameter and this leads to
believe that it can adapt to both low grip conditions, and to
conditions where there’s much more grip, in this last case
with the effect of “freeing” set up.

TECHNICAL BOX #2: WITH CURVED CROSS MEMBER
The chassis Maddox tested was homologated as model LP01, number Cik 34/CH/14, for all the classes. All tubes are 30mm in diameter except for the front and rear cross member, which are 32mm. However, the design, quite traditional with double curve in longitudinal members, all the difference lies in the central cross member, in fact it has a double forward curve, so that it is more upright on the longitudinal members, so now there are 11 curves altogether. Among the other characteristic, wheelbase is 105 cm. Supplementary bars can be mounted both on the front and rear, something though that hasn’t been done yet. Furthermore, the model that we tested had bearing support binders “closed”: the upper part surrounded the axle, so as to make the whole stiffer.


TELEMETRY BOX
As we have seen, one of the main points of the Maddox chassis is reliability and the trust that it gives to whoever is driving it. But, is it possible to weigh up trust? Well, no. But Unipro acquisition data does allow you to register and evaluate several other parameters: let’s see which.

GRAPH #1 #2 #3
One of the results that we can get from the Unipro system, thanks to the ForzaG sensor, and path line line. So, we can trace out the track (or, rather our path lines) that in this case is the track at La Conca, which is 1250 metres long, direction is clockwise, 6 right and 5 left turns and an “S”. The straight continues for 250metres. But it doesn’t end here. Thanks to the Pc Analyser you can judge the correspondents for speed, revs, braking, skid, Gforce and temperature at each point of the track. In this case, (graph1) in the picture of the track we can see a yellow dot, the first braking point, which corresponds to the line for engine revs on the left graph. Besides, in graph 2, we can see how to colour track surface according to one of the prominent colours. In this case, we looked at speed with green representing higher speed, while red stand for the slowest parts of the track. High-speed test registered 121.1 km/h, while the highest minimum one (that is, the best registered at the slowest point) was 51.3 km/h. However, you can also check contemporarily and parallel two of these values, as we did in graph 3 for revs (top) and braking (lower). 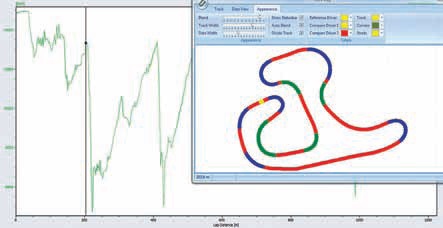 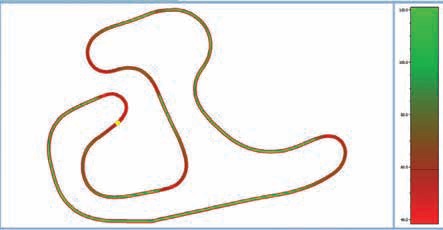 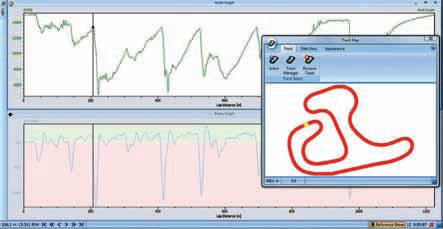 GRAPH #4
This graph underlines wheel skid compared to actual kart speed. You can see how in the comparison the green line represents positive and negative peaks compared to the red line, identifying stronger skids. This because the two lines represent two different laps in different sessions where also the weather conditions had changed. On the green lap, especially, track was wet due to light rain. 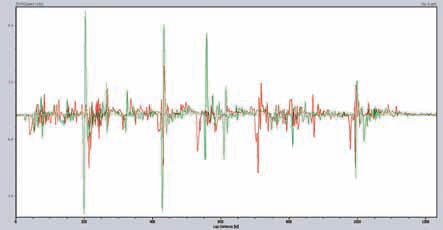 
GRAPH #5
Here in each column we see how long the engine remained at each rev level, starting from 4500 to a maximum 15000 revs (when the rev limiter steps in to control max revs) at 500 rev intervals. There is a first column that represents the permanence between 14500 and 15000 during a single lap; it tells us that the engine stays there for 8.70% of the lap and just below (between 14000 and 14500 revs) the engine stays there for 9.66% of the lap. It shows us how the engine remained at max revs for about a fifth of the lap, which confirms how fast the track at Muro Leccese is depends a lot on how clean engine performance is. 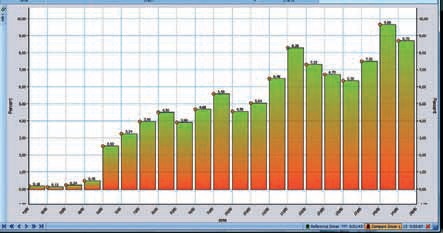 GRAPH #6
To conclude, the “Delta Time” graph can immediately show the time difference between different laps or between two drivers. Two areas, a green one and a red one, mark the graph and to remain in one or the other depends on whether you are dropping or gaining along that part of the track. So, it is useful to see whether you have gained or not and exactly where along the track. 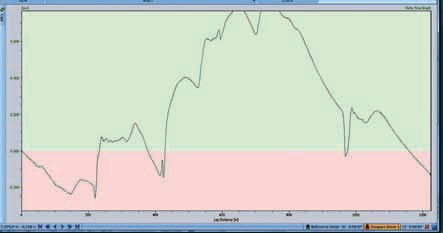 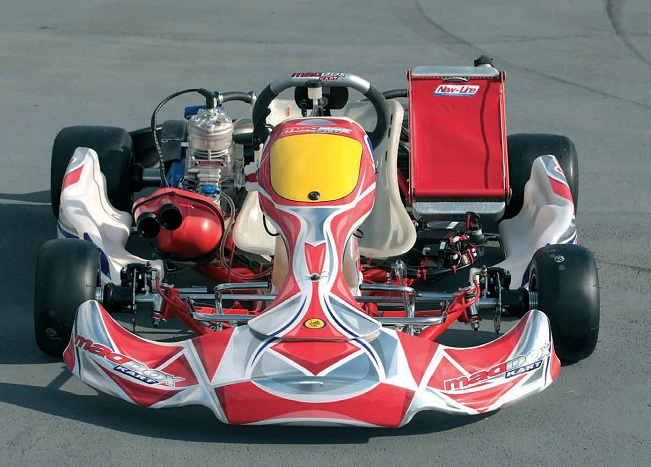 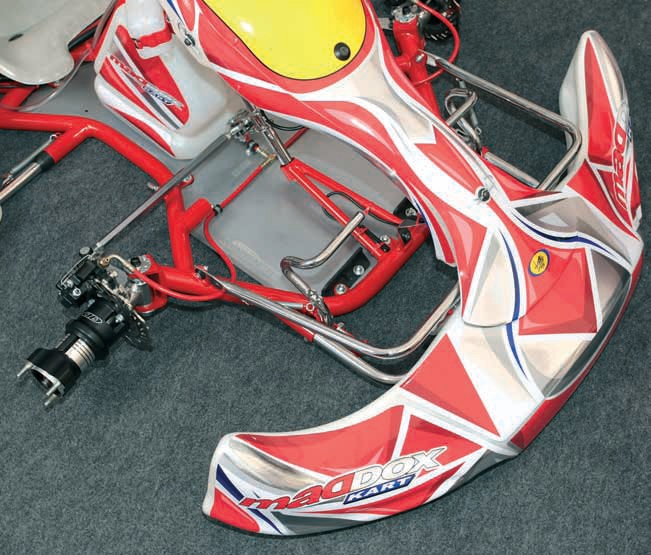 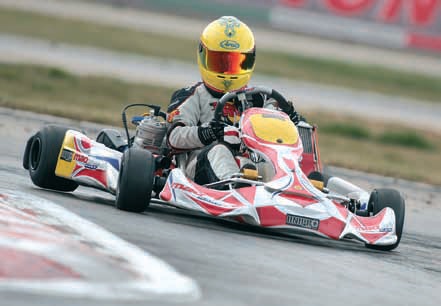 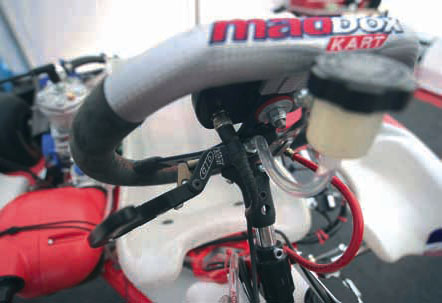 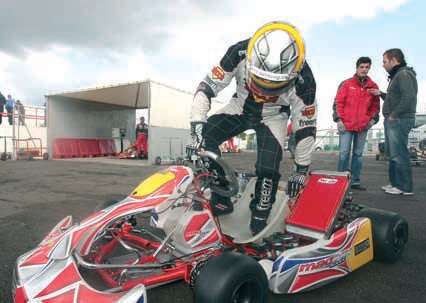 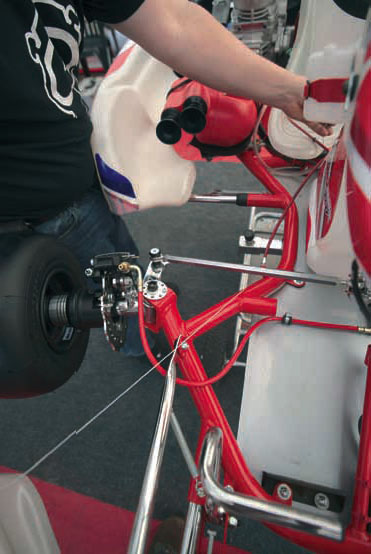 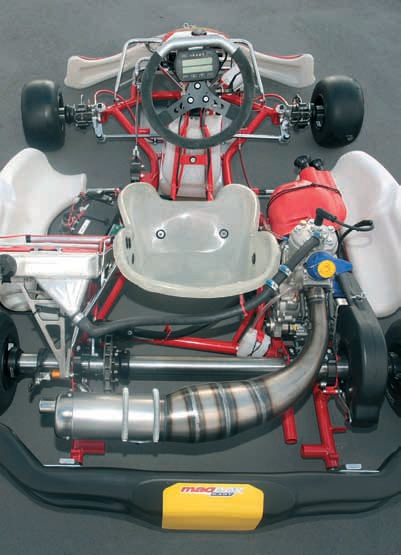