Author: Vroomkart International
100 issues! A milestone we would have never been able to achieve without you, our loyal readers. You believed in us since our first issue, June 2000, which featured two predestined on the cover: Lewis Hamilton and Heikki Kovalainen! Today it’s natural to see them together in McLaren pits, but back then they raced in two different categories for two different teams. What a chance putting the two together, smiling at each other, Lewis 15 and Heikki 18. Well, Vroom did!  And part of its success lays precisely on the ability to foresee the developments of our sport

Editorial 100th Edition All together, enthusiastically
Allow me to express some satisfaction on 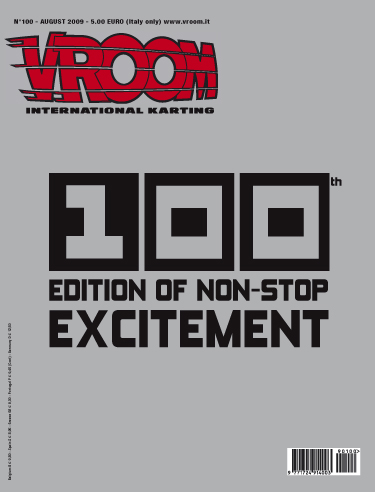 occasion of this celebration. It’s not just a question of numbers… Over ten years it’s normal to reach some aims, like what happened to Vroom Italia, now at its 250th edition. But it’s how today Vroom World – that’s what I’d like to change its name to – has gained the operators’ respect and the credibility of readers in nearly 90 different countries in the world.
Differently than in Italy, in June 2000, Vroom timidly stepped out well aware that there was a challenge with other magazines that had already had a high-sounding name, for example the British magazine Karting Magazine and Japan Kart, and then there were the French and American magazines too. Well, it wasn’t easy to break through some international supremacy. Yet, aware of what was going on around us, Vroom believed in its project and started an exclusive editorial line. First by paying great attention to contents, and at the same time working on design and graphics that could underline the importance and make the columns more appealing to our readers. This job hasn’t been always as easy as it may sound, also because over these past ten years, the karting movement has gone through important changes, if not upheavals that have complicated things, making even the work within the field of information more difficult. So, the magazine too had to change its method and type of contents. Vroom took off, with some nonchalance, right in the middle of the complicated era, when a richer editorial line was called for, a line that looked deeper into the technical regulations and policies, which governed our environment, but at the same time we were celebrating the image of world karting, a scenery that the most important factories of the Made in Italy had wanted, as it was very very important to underline karting as a worldwide sport.
So, we’ve grown together with lots of people who have welcomed and shared news and information concerning their activity with us. One country after the other Vroom has slowly started a network of collaborators building up an exclusive publication, which is valuable to both operators and fans.
There is still a long way to go to satisfy all karting fans in countries all over the world, as we would like. But Vroom really does connect the entire karting world, a world that is united by endless passion…

Our greatest satisfaction is the recognition we have had to get to this point and, to all those who write saying how much they appreciate the magazine. These messages tell us that our aim has been achieved.
The best acknowledgment, however, is appreciation from our readers and from the many operators who are vitally connected to this movement. And, we will continue along this path hoping to achieve some of th e aims that we have been working to achieve, some of which, earlier on in the year, unfortunately haven’t gone as we had hoped due to the world economic recession that we’re living.

Archimede Editore’s economic policies have always worked with the aim of giving this motoring discipline its due recognition. The promotion of kart should be for everyone, independently of whether they want to race or not, avoiding the common belief that has been in this environment for far too long, that is, only few can afford it. Instead, karting, even if it’s not for everyone, must be able to give solutions on which the user has a chance to decide for himself, without being conditioned by bad policies. Some have moved in unsuspected with policies finalised in people aware and trying to satisfy the mass, and today Rotax should be rewarded for its futuristic aims. However, karting offers several models of development “low cost” karting. You learn from history. Also, being allowed to carry out elaborations, which are aimed to improve top karting performance and make leading events more exciting. There really would be lots of excitement. Vroom hopes that before long there will be a turning point, a new era.
In the meanwhile, let’s enjoy this exciting issue that shows some of the most important entries of the new millennium. Thanks you all very much indeed. 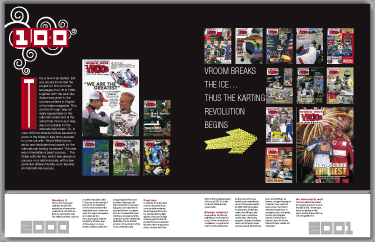 SPECIAL 100th issue   This is how it all started. But you should know that the project for Vroom in two languages took off in 1995, together with the web site. Space was given to the columns printed in English in the Italian magazine… 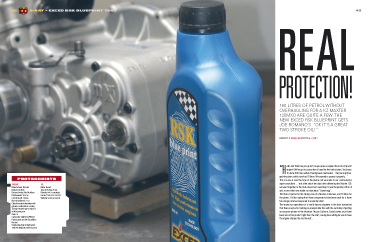 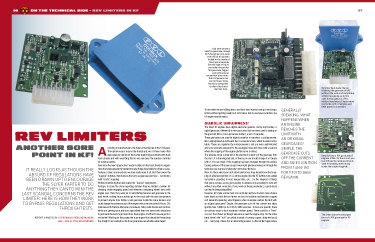 ON THE TECHNICAL SIDE - Rev limiters in KF   It really looks as though the absurd KF regulations have been drawn up to encourage the slyer Karter to do anything they can to win! The last scandal concerns the rev limiter: here is how they work to by-pass regulations and get through tests. 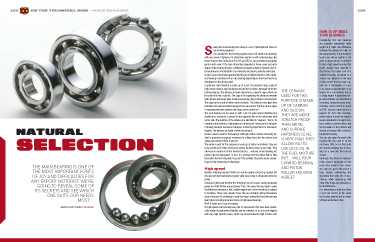 ON THE TECHNICAL SIDE - Main bearing   The main bearing is one of the most important fonts of joy and difficulties for any export motorist. We’re going to reveal some of its secrets and see which one suits our needs most… 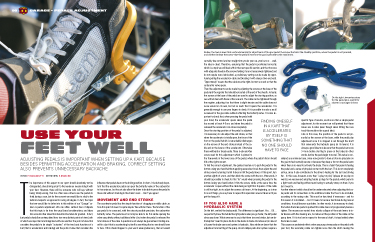 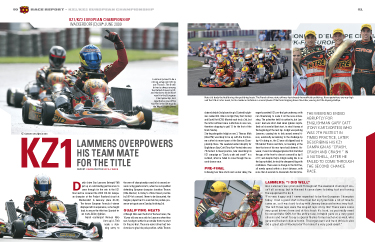 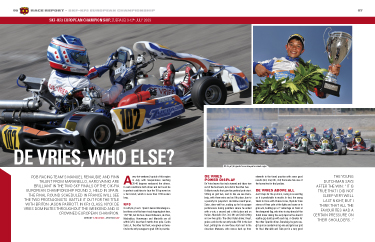 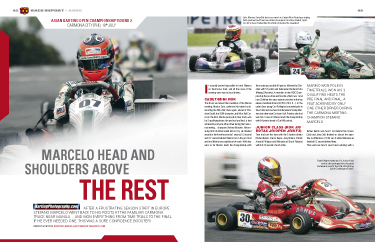 RACE REPORT – AKOC   After a frustrating season start in Europe Stefano Marcelo went back to his roots at the familiar Carmona track near Manila… and won everything from time trials to the final. If he ever needed one, this was a sure confidence booster! 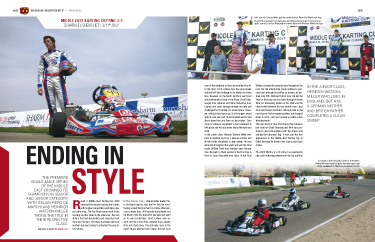 RACE REPORT – MEKC   The premiere single-make series of the Middle East crowned its champions in Senior and Junior category, with Italian Piero De Marchi and Heinrich Watson-Miller taking the title in their respective class. 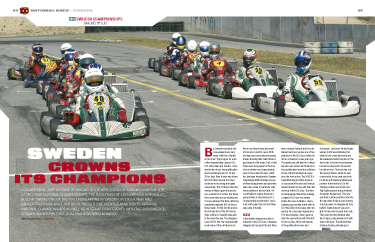 NATIONAL RACES   Just before summer break, racing activity gets hectic. We have report from the Swedish Championship in Malmo, where KZ2, KF3 and Rotax Max titles have been awarded. Also from Europe, we report the 2nd round of the BNL series; the 3rd round of the German Championship; round 3-4 of the Polish National and Easykart Championships. From across the ocean, the CKI series stopped in the fantastic facility in New Jersey; while from Australia we feature the Australian CIK KF2 Championship round 2 raced alongside the Rotax Pro Tour. Last but not least, our correspondent from Argentina tells us all about the difficulties of the national karting scene.


COLUMNS – Mondokart, September national and CIK calendars   Our news section opens up with an in-depth analysis of the KF4 single-engine World Championship by CIK. Plus, the latest project by Maranello for the next season: the Maranello KF engine. Sparco changes owner, with Petronas CEO acquiring the assets of the world famous racing gear manufacturer. Also, the success of the 1st Bruno Grana International Trophy; First wins in Norway and Australia; Formula BMW Europe dominated by Christensen in Hungary. To end with September racing calendar, with almost 40 events from 20 countries around the world, as well as the main races of CIK calendar