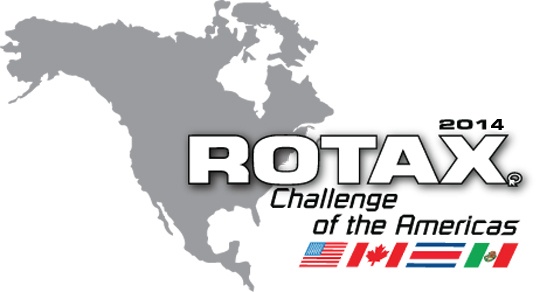 Press Release by: Rotax Challenge of Americas
Path toward 2014 Rotax Grand Finals begins with registration for three weekend Winter International Rotax Max Challenge program.
ORANGE, CA (December 5, 2013) – 2013 was a busy 12-month season for the sport of karting in North America, highlighted by a number of major events and milestone moments. The year began with a successful three-month program for the Rotax Challenge of the Americas as the international Rotax Max Challenge series welcomed record numbers for its three weekend season. The same is expected for 2014 as the program is set for its seventh season, beginning in over a month come the end of January in Arizona, with registration now available for each of the three events.

The Rotax Challenge of the Americas program will host three double-round weekends from January to April. The opening two rounds is set to return to the Musselman Honda Circuit in Tucson, Arizona on January 24-26, with the series staying in the Copper State for rounds three and four at the PKRA Formula K facility in Glendale on February 21-23. The final two rounds take the series back north to wine country in Sonoma, California at the Simraceway Performance Karting Center on April 4-6.

The Challenge champions will be calculated from the best five of six rounds over the three-weekend program. Four tickets will be up for grabs to the 2014 Rotax Grand Finals in the four premier Rotax Max Challenge categories. Senior Max, DD2, DD2 Masters, and Junior Max competitors will race for the series championship, with the driver in each class earning the title to be awarded an entry to the ‘Olympics of Karting’ - scheduled to be held in either northern Africa or in the Persian Gulf area. In 2013, four drivers secured Rotax Challenge of the Americas championships - Phillip Arscott (Senior Max), Fritz Leesmann (DD2), Alan Rudolph (DD2 Masters) and Blaine Rocha (Junior Max). All four represented the series and the United States as part of Team USA for the 2013 Rotax Grand Finals at NOLA Motorsports Park in New Orleans.

The three additional US Rotax Max Challenge categories of Masters Max, Mini Max, and Micro Max will continue to compete within the series as well, expecting bigger numbers in 2014. Those drivers earning championships will be awarded with a paid entry into the 2014 United States Rotax Grand Nationals at Miller Motorsports Park on July 17-20 in Tooele, Utah (racer must be properly qualified through their local USRMC).

“It is hard to believe we are already closing in on the 2014 Rotax Challenge of the Americas,” stated series promoter Andy Seesemann. “It was an exciting 2013 for our series and for the Rotax program in general. Numbers continue to increase, and I expect to see strong numbers across the board once again in Tucson when we open up our 2014 program with an increase in competitors and teams becoming part of our Challenge family. The cost to compete in 2014 will remain unchanged as fees are locked in from the 2013 rates for the upcoming season. Thanks to our partners in MAXSpeed Group, the three circuits, and our industry supporters, I anticipate a great 2014 Challenge.”

Registration into the Challenge is the same as last year, with just over $100 a day entry fee for practice day and two rounds of racing, combined with the cost of tires, fuel, oil and driver pass. With the extended lap count for each category, the lap per cost ratio is among the best when compared to other series throughout North America. Pit spot fees and pit pass cost will also remain unchanged for each weekend. Competitors can now secure their position in this year’s Rotax Challenge of the Americas by entering today. Online registration is now available at the RotaxChallenge.com website or through a PDF Form. The pre-entry deadline for the opening weekend in Tucson is set for January 10, 2014. The RotaxChallenge.com website also has event information for all three weekends, including track and host hotel information. Each of the three host hotels provide excellent service and room amenities, with many of the competitors and teams taking advantage of the Rotax Challenge room rates.

“Karting is and always will be a family sport, and our program welcomes competitors from all over North America and beyond to take part in the three-weekend adventure we call the Challenge,” added Seesemann. “Our series will be one of the very few that does not raise their cost to the racers, allowing them to save money before they even leave home and come into the weekend with a great vibe as the event begins. That’s what we want with each of our events, exciting and safe racing on-track with great camaraderie in the paddock. Our locations offer great things to do away from the track and some good establishments to enjoy a nice dinner after the 7am to 5pm day at the track. We look forward to seeing all the returning competitors and families along with new ones in Tucson at the end of January, and throughout the 2014 season.”

eKartingNews.com will once again be producing ‘Trackside Live’ coverage, including live audio during the weekend as well as detailed coverage that includes daily reports and social media updates. Rules updates for the 2014 Rotax Challenge of the Americas program will be published to the series website, including the recent Mini Max rule updates. Continue to watch www.rotaxchallenge.com for updates as the season draws closer and to enter for your chance to be part of The Challenge.