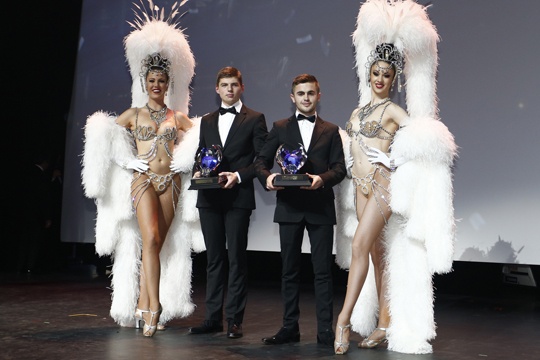 Author: Vroomkart International
The 2013 international karting season has been dominated by the immense talent of the young Dutch driver Max Verstappen, the double European Champion in KF and KZ, and also the winner of the KZ World Championship. He was also the leader of the World KF until the Briton Tom Joyner took a decisive advantage at the last race in Bahrain to be crowned World Champion. Both were honoured at the FIA Prize-Giving this evening.
Max Verstappen, KZ World Champion at age 15
Although he had up until now never won a CIK-FIA international title, Max Verstappen, the son of the former Formula 1 driver Jos Verstappen, marked the season with a series of unusual feats. Winning at European level successively in two different categories, the KZ 125cc gearbox and the KF without gearbox, Verstappen put on a rare performance that gives him wings for the future. Very well prepared, he arrived at Varennes sur Allier (FRA) armed with strong motivation for the KZ World Championship, organised over a single event. The presence of all the kart professionals, the grid filled with titles, absolutely didn't affect the Dutch driver. As confident in his potential as in that of his CRG-TM-B'Stone, he managed the meeting to perfection, starting on the front row for the decisive final for the title.

"The equipment worked fine, the start went well, I took the lead on lap 5 and I gradually got away leaving my rivals to fight behind me. A perfect race!" said Verstappen. "The fact that it was my father who prepared my KZ engines enhanced the satisfaction of winning the world title. I can now move to cars with the certainty of having a successful and outstanding last season in karting."

Tom Joyner, the surprise winner of the KF World Championship
The world class KF programme this year included two events. During the first round, at the PF International circuit in the UK, Max Verstappen (CRG-TM-Vega) displayed such dominance that observers already saw him as Champion. But the intensity of high-level karting competition meant that teams and highly qualified drivers would defy the odds at the second round in Bahrain. Second in the standings, the Dane Nicklas Nielsen (Kosmic-Vortex-Vega) promised to be a very serious contender, followed in third position by the experienced British driver Ben Hanley (ART GP-TM-Vega). Verstappen's kart did not reach its usual velocity on the track at Sakhir, and the Dutch driver faced Nielsen again early in the final while trying to stay in the leading group. The way could have been opened to Hanley, but another Briton, Tom Joyner (Zanardi-TM-Vega), gained a comfortable margin, winning the World Championship at 21 years old ahead of Hanley and Verstappen.

"I really wasn't thinking about the world title when arriving in Bahrain," confided Joyner. "At PFI, I was already in the game, but a brake problem while I was second in the final demoted me to 12th position. When I saw Verstappen in trouble in the final at Bahrain, I did not hesitate to take the lead. In crossing the finish line as the winner, I did not realise I was also World Champion! This is a beautiful contrast to 2012 where I finished second, and above all a dream come true. I hope to continue my career in karting in good conditions."